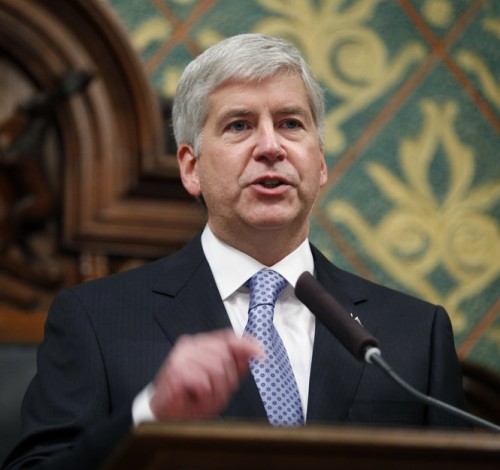 Amid the debate in Michigan earlier this year over Gov. Rick Snyder’s successful effort to expand the power and reach of emergency financial managers now overseeing five local governments and Detroit’s school district, one of his more-ambitious proposals got little notice: The governor proposed to expand the state’s inter-district choice program — and end the practices of Zip Code Education that condemn poor and minority children to dropout factories — by requiring every district to open their doors to any student anywhere.

But now, school districts have begun paying attention to Snyder’s plan. As one would expect, suburban districts are readying to fight Snyder and school choice activists at any turn. The emerging battle hits upon the two most-important reasons why it is hard to expand school choice and end zip code education practices such as zoned schooling. And those issues exemplify why school reformers must fiercely challenge the very mindsets that help perpetuate the nation’s education crisis.

As Redefine Ed‘s Adam Emerson and Doug Tuthill have noted, the Grosse Pointe district outside Detroit has already passed a resolution opposing the plan while city officials (who don’t actually run the district) have done the same. More than likely, the nine other suburban districts that, like Grosse Pointe, have never participated in the current inter-district choice program will do the same. The publicly-stated reason: That requiring choice will lead to the “further erosion of local decision making”. The fact that the Wolverine State’s constitution charges the state with providing “free public elementary and secondary schools”, along with the reality that school districts are arms of state government with no real independence of their own, essentially undercuts their argument. So does the fact that Michigan’s state government provides 54 percent of all school funding, essentially rendering local control a mythology.

But as typical in school choice battles throughout the nation, the opposition from Grosse Pointe’s school board and the families they proclaim to represent (as well as those in other districts) has nothing to do with local control.

From where they sit, they heavily subsidize the district and thus, have them the right to shut the door on children from Detroit and elsewhere. The fact that these districts actually generate more money by skipping out of the state’s school funding system — and collect more money (for the Harbor Springs district, which participated in the choice program until last year, an additional $1,500 per student) means that choice is not exactly a lucrative option. While Michigan may provide the majority of school funding, the fact that these districts can easily opt out of its funding formula makes it difficult to force districts to open their doors to students outside of their boundaries.

This hits upon the fiscal barrier to school choice: The fact that state governments, which now contribute 48 percent of school funding, refuse to assume their constitutional responsibilities and take over full funding of education. This allows traditional districts to come up with the excuses they need to keep poor and minority kids out of the schools they operate (as well as refuse to take on other systemic reforms), killing the seeds of inter-district choice.

Then there is the attitude among middle class families and others that poor and minorities don’t share the same interest in providing their children with a high quality education as they do. From where they sit, poor and minority families should do exactly what they have done — pick up stakes and buy homes — if they want access to a high quality education; since those families haven’t (or, more often than not, can’t afford) to do so, those families must obviously not care enough about giving their kids what they need to succeed.

This particularly condescending and racialist version of the Poverty Myth of Education that is a plague throughout American public education ignores the empirical evidence that poor families desire high quality education. Minorities and parents in high-poverty districts, for example, were more likely than middle-class parents to request a teacher for their child based on how teachers improved student achievement, according to a 2005 study by University of Michigan researcher Brian Jacob and Lars Lefgren of Brigham Young University. But one need not just look at research reports. Some 420,000 children are waiting for seats in the nation’s charter schools, the nation’s most-prominent form of choice, according to the National Alliance for Public Charter Schools; minorities make up 30 percent of enrollment in the nation’s dwindling collection of Catholic diocesan schools, offering tuition assistance to the poor families that attend them.

These views also ignore the reality that for most poor and minority families, choice is not exactly an option. Even with the passage of voucher-like tax credit programs and expansion of vouchers and tax credit efforts in 13 states, the programs still reach few students. Indiana’s new school voucher program, for example, still only serves two-tenths of one percent of the Hoosier State’s 1.1 million school-aged children. The federal Race to the Top program has helped spur the expansion of more charters; but thanks to state laws that place traditional districts in charge of authorizing those schools — and thus, allowing the districts to keep out competition — there are still far too few of them (and even fewer of high quality) to give children real choices.

Poor and minority families shouldn’t have to fight so hard to provide their children with high-quality education. Given that states are responsible for providing high-quality options — and that school districts are merely arms of the states that form them — these barriers are absolutely amoral and illegal. Suburban districts such as Grosse Pointe aren’t necessarily nearly as good at providing high-quality teaching and instruction as many perceive them to be; just ask any black parent whose kids attend schools in similar suburban enclaves such as Fairfax County. But given that they do provide high-quality education to their kids in general, there’s no justifiable reason for denying poor and minority kids opportunities to escape the worst American public education offers.

In pushing to expand public school choice, Snyder and his supporters are doing the right thing. But it will take more than just doing the right thing to make choice a reality. The governor and the Republican majority must move to make school funding a state priority, ending the use of local property tax dollars to fund schools. This could be done simply through a property tax relief effort similar to what has been done in Indiana (where the state generates all but a smidgeon of school operating dollars), or replacing the portion of property tax dollars collected by districts with a statewide property tax that flows directly to the state before being parceled out statewide. Such moves would then allow Snyder to essentially create a weighted school funding (or voucherize) school dollars so that the per-pupil spend follows each student to any school of their choice.

Snyder will also have to team up with choice activists, including the Black Alliance for Educational Options and other Parent Power groups to challenge attitudes among middle class families about their poor and minority counterparts. This means a public relations and advocacy strategy that features families discussing their aspirations, and informing middle class families about the realities of choice. At the same time, Snyder and school reformers must also push for black legislators — especially those representing Detroit who oppose the choice program because it may lead to students (and dollars) fleeing the district — to remember their responsibilities to the children and families they represent. This even includes reminding those politicians that families will remember their votes on the proposal on Primary and Election Day, and recruiting school reform-minded candidates who can apply campaign pressure.

If Snyder’s legislation doesn’t pass, school reform activists could also file suit against the state and districts such as Grosse Pointe for perpetuating Zip Code Education, a strategy touted by Dropout Nation and Heartland Institute scholar Bruno Behrend in last month’s The Conversation podcast. The Connecticut Parents Union is already taking this approach in a suit it filed last month on behalf of Stratford grandmother Marie Menard, who helped her grandchildren attend school in that district until it found out that the kids and their mother didn’t actually reside there. The state would be forced to defend against the suit, but Snyder could also play a part in forcing a negotiated settlement that leads to expanding public school choice.

It is high time to end Zip Code Education practices that deny high-quality choices to every family. And Michigan can be the first place where the next set of barriers are brought down.

The Importance of Changing How Teachers Work