It’s Up to You, New York

Michael Holzman
Comments Off on It’s Up to You, New York

For those of us who live in a rational, data-based world, it can no longer be argued that school discipline disparities can be attributed to the fictitious oddities of “the Black family,” socio-economic conditions, cultural differences and the like.

Since the publication of the unchallenged, and unquestionable, report from the Justice Center of the Council of State Governments, Breaking Schools’ Rules in 2011, we have known that after having accounted “for the factors most often associated with poor school performance . . . race was a predictive factor for whether a student would be disciplined, particularly for discretionary disciplinary actions.” And further: “High rates of disciplinary involvement among African-American students were driven chiefly by violations that are subject to the discretion of school employees . . . The data . . . provide compelling evidence to show that how a school uses suspension and expulsion is driven in large part by the decisions of officials at both the district and individual school level.”

In other words, school discipline disparities by race are a good indicator of racism in schools and systems.

Which brings us to New York City, the greatest city in the world, for some, and the home to the third most-segregated school system by at least one (widely-debated) study.  According to the just-released school discipline data from the U.S. Department of Education, male Black students are three and a half times as likely to be punished with one or more out-of-school suspensions as are male White students and female Black students are an astonishing eight times as likely to be punished in this way than female White students.

These disparities, by themselves, are prima facie indicators of endemic racist actions (not to speak of attitudes) in the New York City school system among “officials at both the district and individual school level.”  And they are not simply of academic interest, they cause lasting harm.  The Justice Center study also found that “Students who experienced suspension or expulsion, especially those who did so repeatedly, were more likely to be held back a grade or drop out of school than students who were not involved in the disciplinary system.”

It reasonably follows, then, that the decisions of district and individual school level personnel to discipline three to eight times the proportion of Black as White students likely results in disproportionate numbers of Black students being held back a grade or dropping out of school. That is one way racist attitudes and actions work to limit educational opportunities for Black students in New York City.

Another way is the “school choice” system with its apogee in the city’s selective high schools.

This year, as usual, enrollment in New York City’s selective high schools was bizarrely skewed by race, especially at the jewel of the system, Stuyvesant High School.  According to the New York City Department of Education’s own records, out of a total enrollment of 3,323 students across four grades at Stuyvesant, 23 are Black as compared to, say, 35 “Native Hawaiian or other Pacific Islander.”  This is remarkable as the U.S. Census counts over two million Black residents in the city, but notes that there are too few Native Hawaiian or other Pacific Islanders in the city to count.  [However, it is evident that there are at least 35.]

“We continue to pursue a set of initiatives to increase diversity at Specialized High Schools,” the city’s education department said in a statement. Sure. 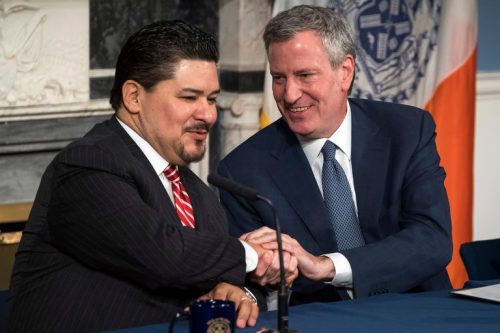 What will new Chancellor Richard Carranza and Mayor Bill de Blasio actually do to build brighter futures for the Big Apple’s Black children? [Photo courtesy of the New York Times.]

Admission to Stuyvesant, and to most of the city’s other specialized high schools, is filtered by means of a test, oddly named the Specialized High School Admissions Test.  Oddly named, as it would be more aptly called the Black Student Elimination Test.  Without getting into the weeds about testing theory and all that, it does seem that there are validity issues with a test that year after year eliminates all but a dozen or fewer Black students from Stuyvesant’s freshman class.

If actions repeatedly result in outcomes at variance with professed goals, it is likely that those outcomes are the actual goals of the actions in question.

Stuyvesant is only one school out of the great sea of the New York City education system, but its diversity failure is a telling indicator of the actual nature of the system.  It is possible that Black students—sorry, all but a dozen Black students each year—do not get into the school for any number of reasons.  The overwhelming number of Black eighth grade students might so dislike the school’s Brutalist architecture that they don’t apply.  Or they might not wish to attend a school with so many more Native Hawaiians than Black students.  Or they could be woefully ill-prepared by their middle schools.

As there is little research concerning the attitudes of Black middle school students in regard to architecture or Native Hawaiians (although there is some anecdotal evidence concerning the latter from interviews with former President Obama, who attended a school with large numbers of Native Hawaiians), we might consider the quality of the city’s middle schools as causal, since Stuyvesant’s admissions data directs our attention there.

White students from families with below average incomes are much more effectively taught mathematics in the City’s middle schools than are (the relatively few) Blacks students from more prosperous families:

It seems that family income has surprisingly little effect on eighth-grade mathematical performance of New York City’s Black students. The difference between the percentage of National School Lunch Program eligible White students scoring Proficient and Above on the NAEP mathematics assessment and those from more prosperous families scoring at that level was 31 points.  For Black students it was 6 points.  Not everyone will agree, of course, but this does seem to indicate that Black students, regardless of family circumstances, attend middle schools with deficient mathematics instruction.

New York City happens, “happens,” to be one of the most segregated cities in the country and its schools are similarly racially segregated.  The Brown University Index of Dissimilarity measures whether one particular group is distributed in the same way as another group.  A high value indicates that the two are separated from one another.  A value of 60 or above is considered very high.  That between Black and White residents in New York City is over 80.  A consequence of this is that neighborhood schools are highly segregated by race.  In other words, Black students from both National School Lunch Program eligible and ineligible families are likely to attend the same schools, as indicated by the small gap in NAEP scores.  The city’s segregated schools do not have to vary in quality by, say, the percentage of Black students in the school, but the NAEP scores seem to indicate that they do.

The administrators of the New York City Schools—the Mayor, the Chancellor, their staffs and advisors—appear to know this, as is demonstrated by the city’s school choice program.  This elaborate sorting of students and schools would be unnecessary if all the city’s schools offered high quality education.  Its very existence is an admission by the city that the quality of schools differ so significantly as to justify this costly and cumbersome system.

They are right, of course, and they know this as they are responsible for those differences in quality, by the way in which they allocate resources, financial and human, in accordance with the racial make-up of each school’s population.  “Them that’s got shall have/Them that’s not shall lose.”

There are certainly other factors at play here.  Racism is not limited to the schools.  There is the criminal justice system with its astonishing racial disparities.  There are racial disparities in higher education and in employment.  But, while some may disagree, the racism in the schools does have strong effects on the later lives of Black students.

Here’s a modest proposal:  Eliminate the Selective High School Admissions Test and fill the selective high schools by admitting the equivalent percentage of students from each middle school.  If the number of grade 9 students in the selective high schools is, say, 10 percent of the total number of grade 9 students in the system, admit the top 10 percent of each middle school’s students. In short order there will be a shift of upper middle class White and Asian families to schools with records of badly preparing their students, so that their children will more easily make the 10 percent cut-off, followed immediately by political pressure from those families to increase the allocation of resources to those schools. Soon, quality differences across the system will lessen

There are other ways to increase educational and life opportunities for New York City’s Black students.  Maintaining the status quo is not one of them.

The Black Kids Are Shortchanged Everywhere