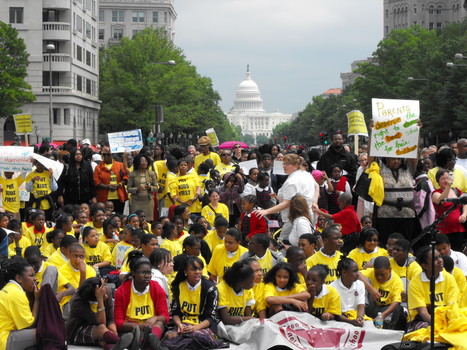 The shutdown last month of the Campaign for Fiscal Equity, the New York City school law nonprofit that successfully fought for New York State to provide more funding to New York City schools in the last decade, has marked the end of the traditional school funding suits. It makes sense. Despite the arguments (and the pretty charts) of such defenders as Rutgers’ Bruce Baker, there is no evidence that spending more on American public education will lead to better results for children. With so much money tied up by ineffective practices such as degree- and seniority-based compensation (including $8 billion a year dedicated to additional pay for teachers earning master’s degrees), it will take the systemic reform of K-12 in order to make school spending more effective in improving student achievement.

But what if equity lawsuits came back to form, this time with school choice activists and Parent Power advocates leading the way? This could possibly happen in states such as Connecticut, the site of three cases in which parents have been arrested for what can only laughingly be called tuition fraud. The idea of using equity and adequacy lawsuits to push for vouchers and other forms of school choice may not exactly be music to the ears of either conservatives generally opposed to judicial activism or to education traditionalists who are foes of all school choice. But if choice activists and civil libertarian groups such as the American Civil Liberties Union successfully take up such moves, it would lead to another round of school choice efforts that would provide more poor and minority children with opportunities to get the high-quality education they deserve.

Such a move wouldn’t be surprising. The ACLU proved its willingness to weigh into this arena two years ago when its Southern California branch successfully sued the Los Angeles Unified School District over the effects of reverse-seniority layoffs on three of the district’s middle school failure factories. The suit led to a settlement that abolishes the use of seniority in determining teacher layoffs at L.A. Unified’s worst failure mills. Other legal activists outside of education are also entering the arena, mostly against school choice. This includes the Legal Center for People with Disabilities and Older People in Colorado, which is attempting to halt the effort by the Douglas County school district to launch a voucher program on the grounds that the initiative would discriminate against students with disabilities. The ACLU’s Wisconsin branch is also involved in a similar suit over the recently-expanded Milwaukee voucher program.

What would motivate efforts to use legal means to expand school choice? Cases such as that of Tanya McDowell, the homeless Bridgeport, Conn., woman currently charged with stealing education after sending her child to a school in nearby Norwalk; 26 other students in that district have been kicked out of school since McDowell’s case came to light. Her case, and that of two other Nutmeg State parents and caregivers, have all come on the heels of Ohio mother Kelley Bollar-Williams’ conviction earlier this year for supposed tuition fraud.

These cases have made clear that it’s time to end zip code education, and have been the driving forces behind successful efforts in 13 states to enact school choice measures. But as seen in Pennsylvania, where efforts to pass a voucher plan and a tuition tax credit initiative fell to seed, a lot must be gotten right in order to successfully battle suburban districts, National Education Association and American Federation locals, and other foes of choice. So choice activists, including those centrist and liberal school reformers finally convinced of the need for vouchers, tax credits and inter-district public school transfers, may end up trying to persuade judges to see their side.

At the heart of such suits would be the education provisions within state constitutions. In 15 states, the constitutions require them to encourage and promote educational opportunities and the development of knowledge “adequate” educational opportunities for children. This could, in theory, be interpreted to allow for the existence of school vouchers  and voucher-like tax credit plans that allow private-sector firms to start their own voucher programs in exchange for tax breaks. In Illinois, for example, the state is required to finance “the  system of public education”, essentially allowing for the possibility of vouchers; same in Georgia, where the state is called to provide an “adequate” education system, which can include financing public schools and offering vouchers.

But in most states, the constitutions require their governments to only provide for “free public schools”. Blaine Amendments, originally crafted by Know-Nothings and other religious bigots during the 19th century to prevent Catholic schools from receiving state dollars, further restrict the ability to finance vouchers. But this isn’t necessarily a barrier to choice. Since the clauses do require the states to provide for public schools, it also can be interpreted to allow for children to attend any public school they want, be it traditional or charter, in any part of the state. Practices that have led to zip code education, including the concept of zoned schools, are essentially unconstitutional; and thus, inter-district choice of the kind encouraged by otherwise foes of choice such as Richard Kahlenberg of the Century Foundation would be allowable. It would also put an end to caps on the expansion of public charter schools, the nation’s most-prominent form of school choice.

A lawyer could argue that these clauses mean that a state has an “affirmative obligation” to provide a substantially equal educational opportunity to all schoolchildren in the public schools. This would include ensuring that every school is teaching according to a clear set of state standards and have adequate resources, all traditional equity and adequacy arguments. But it could extend further. A lawyer could challenge practices that lead to the lack of equity and access to high-quality education — and that would include rules that restrict families from getting those adequate resources by exercising school choice.

Districts would then be forced to accept students outside of their district boundaries. But this would also trigger another effect: The end of funding education through the use of property tax dollars collected by districts. Since states are required under their constitutions to provide for public schools, it can also be interpreted to say that state governments must also finance them too. Such judicial pressure, along with demands from districts who must now take on what they consider to be free riders on local taxpayer dollars, could finally force states to actually take steps that should have been done decades ago and move to a weighted student funding formula that would essentially act as vouchers with dollars following children to their respective school choices.

Certainly taking such court action wouldn’t be appreciated by conservative school reformers, who, like their movement allies in the political arena, are not fond of judicial activism. But it isn’t as if conservative reformers and school choice activists haven’t used courts in the past. A decade ago, conservatives such as Clint Bolick, along with groups such as the Center for Education Reform, backed the Zelman case, which led to the U.S. Supreme Court ruling allowing for states to launch their own school voucher programs. One can easily imagine conservatives supporting similar efforts.

But more likely, it will be organizations such as Parent Revolution (which successfully pushed for the nation’s first Parent Trigger law) and other Parent Power groups now emerging on the school reform scene that will make the efforts. Why? Because they are better-positioned politically to reach out to traditionally left-of-center civil liberties groups such as the ACLU, which may be more-skittish of supporting school choice if it appears to be a conservative-led effort. Since Parent Power groups, along with other school reformers, are pushing to end traditional seniority-based pay scales and abolish Last In-First Out layoff rules, expect those efforts to be tied together with court-mandated torts for expanding choice.

All this said, there is plenty of what-ifs that come with this analysis, including judicial interpretation of what power state governments actually have to allow for inter-district choice. The Georgia Supreme Court’s ruling last May that the state didn’t have the constitutional standing to authorize charter schools — and that only districts could do so — is one example of this problem; judges can easily rule against such efforts based on that matter in legal interpretation called original intent. One must also remember that the earlier generation of equity and adequacy torts didn’t exactly achieve their long-term goals: The Abbott decision in New Jersey, for example, remains an shining example of why lawsuits aren’t exactly the cure for what ails American public education.

No matter what happens, these are interesting times for school choice. School reformers and Parent Power activists may end up embracing a tactic of education traditionalists in order to advance their goals.

The Failure to Prepare Aspiring Teachers

Voices of the Dropout Nation in Quotes: School Reform and Job Creation