After Ackerman, The Next Step for Philadelphia Schools Should Be the Hollywood Model

RiShawn Biddle
Comments Off on After Ackerman, The Next Step for Philadelphia Schools Should Be the Hollywood Model 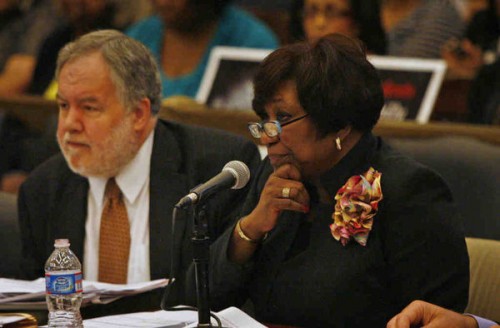 Today’s announcement that Philadelphia schools chief Arlene Ackerman has been sacked as superintendent isn’t surprising. Her tenure has been wracked with enmity from everyone in the City of Brotherly Love — especially after last year, when she blocked the release of salary data on district officials. The fact that Ackerman accepted a four percent raise in spite of the district’s perilous financial state proved that she didn’t have the best interests of students and taxpayers in mind. And with just 42 percent of the district’s 258 schools making Adequate Yearly Progress this year, she also wasn’t succeeding in her foremost job of turning around its teaching and curricula.

Ackerman walks away with a sweet $905,000 golden parachute. She also leaves behind the same kind of acrimony she has engendered during a failed stint in Washington, D.C., and more-successful effort in San Francisco. Some other district will her again. Her temporary replacement, current deputy superintendent and former NBA and University of Pennsylvania executive Leroy Nunery, couldn’t do much worse. But the real question is whether Pennsylvania state officials, who have controlled the district for the past decade, should try a different school reform. It is time for the state to follow the New Orleans model and get rid of the traditional district bureaucracy.

Since the state took over Philadelphia a decade ago, the district has gone through an array of overhauls, including the hand-off of school operations to outfits such as Edison Schools, and even the hard work of reformers such as Paul Vallas (who began Chicago’s successful school reform effort and has just finished up a successful stint overseeing the revamp of New Orleans’ school system). But the district still remains one giant dropout factory; just 65 percent of the city’s Class of 2010 were promoted from 8th grade to 12th grade versus 74 percent of students from the graduating class nine years ago, according to a Dropout Nation analysis of data reported to the U.S. Department of Education. In short, Philly hasn’t improved under state control.

There are plenty of reasons why Philly continues its educational malpractice against children.One lies with the reality that none of the reforms have dealt with the bureaucracy at the heart of the district. Shuffling superintendents in and out of leadership isn’t a school reform strategy. Neither is contracting out school operations. The very fact that state education departments are simply not equipped to operate or directly oversee school districts is another; as seen across the river in New Jersey, where the state has taken over districts such as Jersey City with little success, taking over a district doesn’t matter if you don’t actually weed out incompetents from the highly talented.

Then there is is the fact that the district’s contract with the AFT local, along with state rules restricting robust teacher performance management, makes it difficult to address the low quality of instruction that is an underlying cause of Philadelphia’s problems. Student test data is “not among the recommended criteria” for evaluating teachers, essentially preventing the district from rewarding and keeping high-quality teachers and ditching those who can’t make it in the classroom. The AFT has also fought hard to keep its privileges. It successfully blocked the district from sheltering its Promise Academies from revere-seniority layoff rules that force it to send less-senior teachers onto the unemployment line regardless of their success in improving student achievement.

Pennsylvania state officials can’t continue this bungling. It needs to admit that the traditional district model is a failure and should implement a version of the Hollywood Model of Education championed by Dropout Nation. Pennsylvania should follow the example of Louisiana, which essentially transformed New Orleans’ traditional public schools into charters. This could include allowing groups of parents, along with charter management organizations and community nonprofits to take control of the schools. Requiring all the schools to create boards of directors with parents in majority control also makes sense and should be done. The state should also pass a new law allowing schools in Philadelphia, along with those in the rest of the state, to use student test score data in teacher evaluations; this should be part of an omnibus teacher quality reform law that includes addressing the state’s ed schools.

Ultimately, Pennsylvania can’t simply continue with the status quo in Philly. The state must embrace the Hollywood Model of Education and move toward a better way to provide high-quality education for all of the city’s children.

Why Education is the Best Long-Term Anti-Poverty Program