The Condemnation of Black Children to Dropout Factories Must End 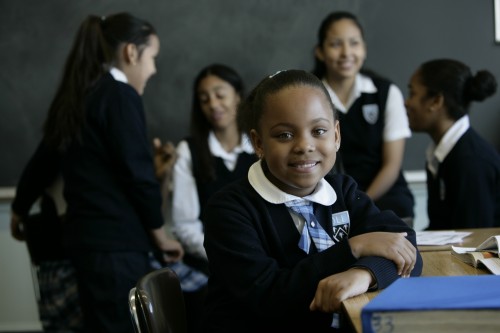 It is impossible to defend American public education when half of all black males will drop out into poverty and prison. Nor can the practices within public schools be supported when they result in a third of all fourth-graders– including half of black children in that grade — being functionally illiterate. And if education is the most-important civil rights issue of this time, then it impossible to support the sustaining of academic failure.

Now more than ever, we must give parents the power to make high-quality education decisions for their children and even allow them to use parent trigger laws to overhaul the schools in their own communities. We must expand options for kids to escape dropout factories and failure mills,  whether it is in the form of charter schools, school vouchers, public school choice and other new options. In essence, as Malcolm X would say, we need to help our kids get the high quality education they need to succeed in life by any means necessary.

Given the stakes, it is so disappointing to listen and watch some folks who call themselves civil rights activists and leaders essentially argue that our children should be stuck in the worst American public education offers.

There are black legislators such as Virginia State Sen. Henry Marsh, who helped vote down a proposed school choice law last month because  he felt such a move would end up  This in spite of the evidence that there are far too many schools failing young black men and women in his own state; in Marsh’s hometown of Richmond, just 68 percent of the school system’s Class of 2009 — and 61 percent of the young black males in it — made it from eighth to 12th grade.

Then there are leaders of NAACP branches in Pennsylvania and Mississippi, which are lobbying legislatures in their respective states against the creation of voucher-like tax credit programs and the expansion of charter schools. In spite of the fact that just one out of every two black teens in both states will graduate from high schools, NAACP leaders such as Mississippi President Derrick Johnson declare that school choice will “create and maintain a permanent situation of second-class citizens.”

Then there is the drama in Indiana where the state’s House Democrats (now in the minority) have skipped out of the state in order to shut down efforts to expand the reach of charter schools and other forms of school choice. Black Democrats such as Greg Porter, who represent some of the Hoosier State’s worst dropout factories (and perpetrators of poverty and crime in the communities stuck with them), have declared that they oppose choice because they don’t want to “permeate classism within our educational system”.

Some of this isn’t shocking. As Dropout Nation has noted, old-school politicians and civil rights groups are still stuck fighting the battles of the 1960s and 1970s. From where they sit, integration, busing and equity lawsuits are the cures for achievement gaps between blacks and whites; school choice will lead back to the kind of segregation that earlier generations of civil rights leaders so successfully opposed.

What they fail to realize is that integration was embraced by an earlier generation of civil rights leaders because it was the only way to get what they thought was high-quality education to black children of that time; they figured correctly that Jim Crow-dominated school boards would never pour resources into schools in black neighborhoods. That generation didn’t fully understand what we now know so well: Achievement gaps cannot be solved by simply putting black kids and white kids together, or even putting middle class students together with their poor classmates. The solution lies with systemic reforms of instruction, curricula, and school leadership, along with fostering opportunities for students to escape poor-performing schools. Integration has proven that it doesn’t work.

At the same time, these old school activists and politicians also forget that most students already attend segregated schools. This is largely because of the practice of zoned schooling (which limits students to schools within their zip code) and school funding systems that restrict families from sending their kids to high quality options even within blocks of their home. Expanding school choice would not only help improve the quality of education, it can even break down systemic barriers to integration (if not the self-selected segregation even students practice in school).

Meanwhile the old-school crowd continues to maintain alliances that do nothing for the children they are supposed to care about. Marsh has collected at least $3,250 from the National Education Association’s Virginia affiliate within the past decade, while Porter has gotten $20,500 from the union’s Indiana branch. The NAACP on the national level (and even on local levels) has also been a major recipient of largesse from (and a key collaborator with) the NEA. Yet the union, along with the American Federation of Teachers, advocate for the obsolete systems and practices that are perpetuating the second class status of blacks, other minorities and the poor in American public education. It is shameful for old-school black leaders to continue taking money and keep up alliances with outfits that essentially do harm to all of our kids, especially those of our own skin color and race.

We should applaud Marsh and the NAACP branches for the powerful work they did in the past to end Jim Crow segregation and to make blacks part of the American social and economic mainstream. They deserve our gratitude and our thanks. But today, they are on the wrong side of the most-important civil rights and system reform issue of our time. For that, they deserve nothing but scorn.

When they argue against school choice, against expanding charter schools and against teacher quality, curriculum and other systemic reforms, they are supporting the continued condemnation of millions of young black men and women. These are young men and women like my nephew and niece, and like my younger cousins, who are growing up in better economic circumstances. More importantly, the condemned included the poor kids growing up in the worst parts of Richmond, D.C., Alexandria and New York City, who have few options, have no adults capable of defending their interests, and are subjected to the worst American public education offers.

When they defend education’s status quo, they are ignoring the reality that education is critical to economic and social futures. In an age in which rigorous college preparatory curricula, good-to-great instruction and cultures of genius are critical for our kids to get even high-paying blue-collar jobs, our kids need more opportunities to get high-quality education, not less. Expanding opportunities to learn is more important than sustaining districts that continue perpetual failure.

And when they condescendingly proclaim, as Marsh did, that children and families who support choice should stick with failing traditional public schools (and will one day realize that it’s the right thing to do), they have made it clear where their priorities lie. Essentially, they are saying that the adults who commit educational malpractice and neglect are more important than the children in their own communities.

For such squalid thinking and action, the Marshes, the Porters and the NAACPs need to move aside for the new generation of school reformers and families who will bring better education to their children by any means necessary. Or face being pushed out of the way. Black America and its children deserve much better.

Voices of the Dropout Nation in Quotes: By Any Means Necessary Edition