Schools That Work? Why Manual High Isn’t One of Them

RiShawn Biddle
Comments Off on Schools That Work? Why Manual High Isn’t One of Them 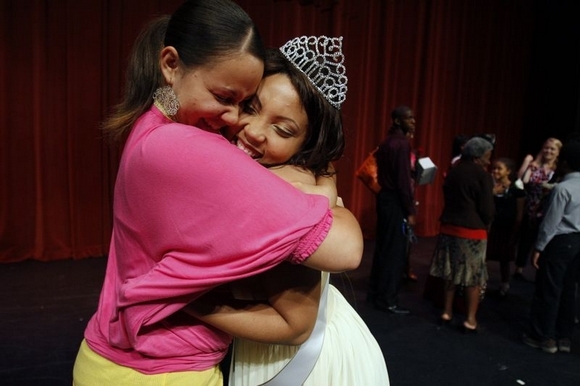 Jammyra Weekly is a rare graduate of Manual High.

Education advocates have a tendency to want to present ‘examples’ of schools that go against the grain of academic failure. But isn’t without problems. Sometimes the examples aren’t nearly as good as they may seem, especially when facts are borne out against rhetoric.

Take Emmerich Manual High School in Indianapolis, the subject of this video by the Annie E. Casey Foundation for its  Schools that Work series. As Eugene White, the superintendent of the Indianapolis Public Schools likes to point out, the high school has increased the number of students heading to college by 50 percent. The problem? Manual has long been — and remains — one of Indiana’s (and America’s) most-persistent dropout factories.

Just 39 percent of the school’s original Class of 2008 graduated four years later, according to the Indiana Department of Education. Just 24 percent of the original Class of 2009 were promoted to 12th grade (2009 graduation rates have yet to be posted). In fact, within the past three years, at least 40 percent of Manual’s freshmen have eventually dropped out, at least according to official numbers. The real dropout rate, when one considers that fifth-year students aren’t likely to complete, is more like 60 percent. 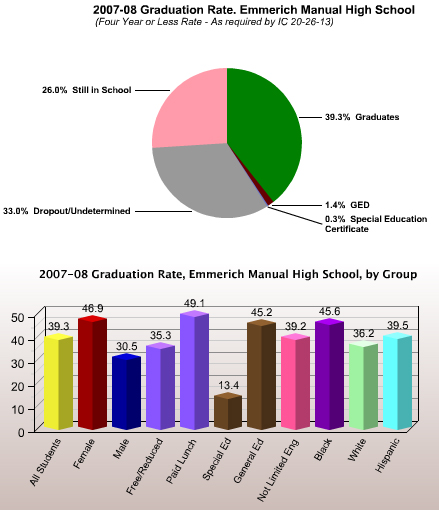 The woefulness of Manual’s performance — and IPS’s problems overall — can be seen in the broken-down graduation rates for each socioeconomic group counted in the No Child Left Behind Act. Fewer whites graduate from the school than blacks. Meanwhile the graduation rates for middle-class students is nearly as abysmal as that for poor students receiving free or reduced lunch.

Unfortunately, Manual is also a microcosm of IPS and of many parts of the nation. After all, IPS is home to the worst graduation rates for both black and white males. The city itself, more white than black, is representative of other urban locales. The graduation rates in other districts within Indianapolis, although slightly better, are also not where they should be.

Ultimately, increasing levels of college completion doesn’t matter if one out of every two students is dropping out of high school in the first place. In any case, a high school that inadequately educates its students isn’t likely to do a good job of college preparation; the kids will just flunk college once they get there.

Now, the Annie E. Casey Foundation is an great organization. Its staff, including Bruno Manno, does admirable work in improving the lives of America’s children. Unfortunately, the problem Casey faces, as does many reformers, is that the nation’s public schools aren’t helping much in offering examples of successes in college attainment and completion. This, of course, is should be a concern to the communities in which these schools are located. As Indianapolis can attest, poor-performing schools can hinder economic and social growth for the city and all of its residents.

Manual High proves, as I have mentioned earlier, that the issue isn’t whether enough children are attending college — or if too many are attending, but whether they are adequately prepared to take advantage of every educational and economic opportunity before them. A child who isn’t adequately prepared for higher education — be it college, trade school, or apprenticeships — also isn’t likely to be fit for work at McDonald’s or Family Dollar. In this economy, every job is likely to be knowledge-based, and thus require high levels of math and English competency.

Manual High represents a lot of things. But it doesn’t represent a school that works for its students. The video, however, is nicely shot.