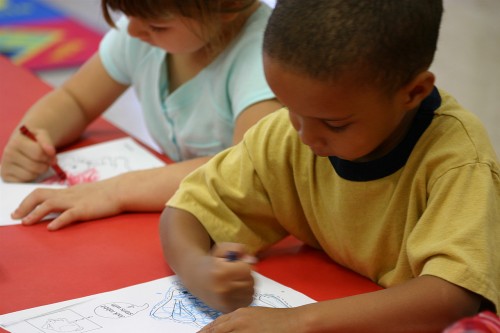 The percentage of American fourth-graders reading Below Basic — or functionally illiterate — on the 2011 National Assessment of Educational Progress, the federal test of student and school achievement. That is a six-point decline from 2002, but no change from the 2009 exams. Meanwhile, 24 percent of eighth-graders reading Below Basic in 2011, a one-point decline from 2002.

The percentage of Latino eighth-graders reading Below Basic in 2011, a seven-point drop from levels in 2002. That’s a faster decline than the four-point drop for African American counterparts (from 45 percent in 2002 to 41 percent in 2001) and for whites (from 16 percent to 15 percent in the same period). The percentage of American Indian eighth-graders who were functionally illiterate declined by two points between 2002 and 2011, from 39 percent to 37 percent.

The percentage of eighth-graders eligible for free- and reduced lunch who were functionally illiterate in 2011. That is a three-point decline from levels in 2002. Fourteen percent of eighth-graders not eligible for free- and reduced-lunch were functionally illiterate, a two-point decline from the same period nine years ago.

The percentage of fourth-grade suburbanites who are functionally illiterate in 2011, the same levels as it was in 2007, when the U.S. Department of Education began breaking NAEP data by location of school and district. Thirty-nine percent of fourth-graders attending urban schools scored Below Basic in 2011, a one point drop from the levels four years ago; while the percentage of rural fourth-graders who were functionally illiterate declined from 31 percent in 2007 to 29 percent in 2011. Thirty-six percent of fourth-grade town students read Below Basic in 2011, a two-point increase from 2007.

The 2011 NAEP results offer some important stories on the successes of efforts to reform American public education — and at the same time, point to need for continuing this systemic overall. The good news is that fewer poor and minority children are functionally illiterate. The results show that the No Child Left Behind Act has been an imperfect, yet important first step in fostering systemic reform. The law brought accountability to American public education, forced revelations of inflated graduation rates, and showed the poor performance of suburban districts in improving student achievement for all kids (including those from poor and minority backgrounds).

It is especially amazing to consider the successes of the most-aggressive school reform states and even those who have pushed for strong reforms in reading curricula and instruction. Just 29 percent of Florida’s students read Below Basic on the 2011 NAEP, an 11 percent decline from nine years ago; 38 percent of its free- and reduced lunch students read Below Basic in 2011 versus 51 percent nine year ago. This success, though slowed, was sustained even as the Sunshine State’s efforts weakened slightly under Charlie Crist, who succeeded the more-aggressive Jeb Bush. In Alabama, where the state sustained aggressive reading instruction and curriculum reform (even as it failed to overhaul teacher quality and expand school choice), 33 percent of students read Below Basic, a 15 percent decline from nine years ago; the percentage of poor fourth-graders who were functionally illiterate declined by 16 percent in that same period, from 61 percent to 45 percent.

At the same time, no matter how you look at it, one out of every two black, Latino, and American Indian fourth-graders — an one out of every five white and Asian students in the same grade — are unable to read at levels needed for future success. When one looks at the high levels of illiteracy among young men — which account for most of the high levels of illiteracy in each racial and income category — it is clear that far too many young men and women are not getting the instruction and curricula they need to succeed in school and in life. And the stubborn resistance of suburban districts to reform must be overcome in order all of the students in those schools to get what they deserve.

So we must continue to overhaul how we recruit, train, evaluate, and reward teachers; develop stronger, more-entrepreneurial school leaders; expand the number of high-quality school options for all kids; provide all kids with rigorous college preparatory curricula; make parents the lead decision-makers in education and given them the tools they need to make smart decisions for their kids; and build cultures of genius in which the potential of all kids can be nurtured. We must also expand accountability, holding all the players in education accountable for doing right by our kids, no matter who they are or where they live. The steps being taken by the Obama administration and congressional leaders to eviscerate No Child’s accountability measures are absolutely senseless. And we need even more achievement gap mania than ever.

The NAEP results are the next starting point for pushing harder and faster for systemic reform. After all, we have only one chance, every day, to help our children make their ambitions real.

Voices of the Dropout Nation: Phillip Jackson on the Need to Transform Black Communities