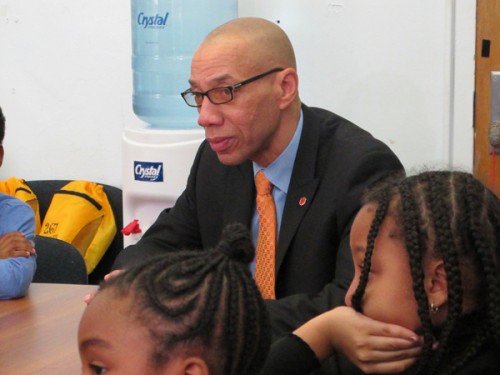 Few traditional districts have been as reform-minded as New York City under the mayoral control of Michael Bloomberg. From shutting down more than 100 failure mills and dropout factories, to allowing principals to keep laggard teachers from working in their schools, the mayor and his array of chancellors (including the legendary Joel Klein) have succeeded in turning the district around from being a Superfund Site of American public education. Although the Big Apple still struggles in providing all children (especially young black men)  in every corner of the city with a high-quality education, the district has reduced the percentage of functionally-illiterate fourth graders (as measured by the National Assessment of Educational Progress)  from 53 percent in 2003 to 39 percent in 2011, and improved graduation rates and has shown a willingness to not be servile to the American Federation of Teachers local that had long held the city under its proverbial thumb.

So the announcement this morning by current schools Chancellor Dennis Walcott that he would institute a series of teacher performance management policies if the AFT affiliate doesn’t agree to allow the district to use New York State’s new teacher evaluation system was definitely not surprising. But it was once again heartening to see a school leader move to advance reform and be willing to take a union far too concerned with defending the interests of even the worst-performing of its members at the expense of children.

Certainly the intransigence of AFT’ New York City local President Michael Mulgrew, whose opposition to using the Empire State’s new evaluation system is as much driven by is desire to succeed predecessor Randi Weingarten as head of the national union as by the opposition of the Baby Boomers who are a dwindling minority of rank-and-file members, is driving Walcott’s latest move. Within the past month, the AFT launched its third lawsuit against the city to stop the shutdown of failure mills (this time, without the help of the union’s fellow-travelers at the National Association for the Advancement of Colored People’s New York State branch), this time all but admitting that the goal is to keep rank-and-file members (including those who probably should have left city employ years ago) on the job. The union has also taken to the airwaves and newspapers, paying for ads proclaiming that Walcott’s boss, Bloomberg, still “doesn’t get” that it doesn’t appreciate his efforts (and also reminding state legislators in Albany and those aspiring to succeed Bloomberg as mayor that they better not think of following his example).

But in declaring that the district would remove teachers who failed to improve student achievement for two consecutive years (and offering to buy out their continuing contracts), Walcott is making clear that Mulgrew and the AFT are merely avoiding discussion about one of the biggest challenges facing the Big Apple as it embarks on a second wave of reforms: Overhauling how it hires, compensates, rewards, and manages the performance of its teachers. Although the first round of reforms have helped improve student achievement in the city, New York City will need to take more-aggressive steps in this second step. Providing all kids in the city with strong, comprehensive college-preparatory curricula (an area which Walcott and his predecessors have tended to ignore) would certainly help, as would expanding charters, shutting down more failure mills, and allowing families to take over those schools they want to save through Parent Trigger laws. But none of this — even rolling out Core Knowledge’s strong reading curriculum — would accomplish little until the city takes stronger steps to remove laggard teachers and replace them with those who make the grade.

This was made clear by the city last year when results from the teacher performance management pilot it undertook revealed that 18 percent of teachers evaluated were deemed ineffective in the classroom. Based on the efforts that Washington, D.C., has undertaken with its pathbreaking IMPACT program, one can expect New York City to dismiss five percent of its teaching corps. For the AFT, which is dependent on having as many rank-and-file members in classrooms (and paying dues) to sustain its $205 million-a-year operation, more-stringent teacher evaluations equals lost dollars. And it will fight to oppose more-robust evaluations (and the use of objective student test score data in them) even if it means battling with insurgents representing younger teachers such as Educators4Excellence (which is demanding more-objective evaluations of teachers and the school leaders who supervise them), and, perhaps, even opposing the (slightly) more-moderate line now being taken by Weingarten at the national level.

Walcott has essentially forced the AFT into a rhetorical (and tactical) corner. If the union continues to oppose using the new evaluation system, it puts itself in the awkward position of talking out of both sides of its mouth. It can’t continue declaring that it wants teaching to become more-professionalized and then oppose efforts by New York City and the Empire State to do just that. On the tactical end, if Walcott goes ahead and begins dismissing teachers and buying them out, the union will then have to play by his ground rules (or accept an even worse deal) once it relents and strikes a bargain (and it will).

But for New York City taxpayers, Walcott’s moves would not only help improve the schools for which they pay a pretty penny, it would also get rid of laggards who collect sweet perks in exchange for riding the proverbial pine (and keeping out of classrooms). Currently, the city pays $100 million annually to keep 800 laggards out of classrooms (some of whom were not teaching since the days of the infamous rubber rooms); buying those teachers out would be better from both a fiscal and teacher quality perspective. For the city’s high-quality teachers, Walcott is effectively stating that they should be able to teach in schools with professionals who are their equals and not deal with those who don’t deserve tenure. And for Big Apple kids, Walcott’s declaration (and that of his boss) that low quality teachers shouldn’t be allowed to continue educational malpractice is an important stand for ensuring that all kids get the good and great teachers they deserve. All in all, not a bad move at all.

Time to End Congressional Myopia on Choice and Parent Power

Another Lawsuit for School Reform: StudentsFirst, DFER and Others Push for California to Embrace Teacher Quality Reforms