More Thoughts on Education This Week: On Performance Pay

RiShawn Biddle
2 Comments on More Thoughts on Education This Week: On Performance Pay 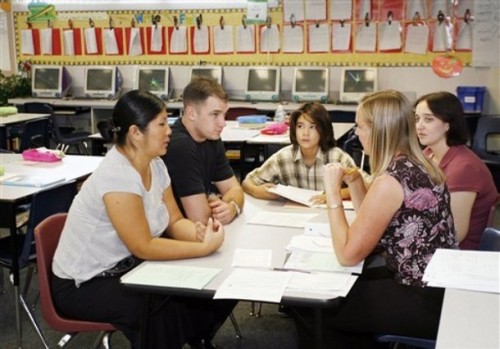 The Devil is in the Design: As I noted this morning’s column in The American Spectator on teacher performance pay, the school reform movement needs to think through how these plans are designed and implemented in order for them to actually gain traction. Save for the work Michelle Rhee did in D.C. in crafting that district’s performance pay plan as part of the development of the IMPACT evaluation system, most states and districts seem to pursue performance pay plans in a willy-nilly fashion, far too willing to water the systems down in order to keep National Education Association and American Federation of Teachers affiliates at bay than on actually rewarding good-to-great teachers for their work.

To make performance pay work, it means taking an aggressive approach that means battles with teachers union bosses and even with some teachers instead of accommodation. Rhee that this could be done successfully. Other reform-minded districts and states looking to develop performance pay plans should do the same.

It must also include balancing most of the rewards for performance pay on individual work than on the school’s success. As seen in the failure of the New York City performance pay initiative (which based much of the bonuses on the progress of the school), such efforts dilute the reward for teachers who are doing great work while allowing laggards to free ride on the backs of their more-successful colleagues. More importantly, performance pay is about rewarding good-to-great teachers for their individual work. That said, there can be a component of the bonus that can be based on the collaborative efforts of a team of teachers in a particular subject area; this would encourage more-thoughtful teamwork  and is less likely to dilute the rewards for individual achievement.

Second, it must be more than pay. As Dropout Nation as pointed out again and again, giving out grants to teachers that allow them to develop their own programs for addressing aspects of the nation’s education crisis or even to start their own schools, would certainly be as rewarding to them as actual cash pay. Imagine if a John Taylor Gatto, a Jaime Escalante, a Marva Collins, a Steve Evangelista or even a Chad Sansing could do with a grant to start a new initiative to improve student achievement?

Third, we should ask teachers want they want to see in performance pay — and I mean, ask teachers, not their union bosses (who have no interest in the success of such plans). At the same time, let’s keep this mind: Since many teachers have never worked in the private sector, they may not fully understand what would work.

Finally, we must create the best performance pay of all: Build cultures of high expectations in which high-quality teachers are recognized publicly for their work and not ostracized by laggard peers who are afraid of being shown up. As the Los Angeles Times made clear last year in its series on teacher quality in L.A. Unified elementary schools, and from my own discussions with teachers (especially young, talented instructors), the thin chalk line that protects laggard performers from getting kicked to the curb also leads to disdain of talented teachers who have innovative ideas, want more-collaborative teaching efforts, and are willing to embrace reform.

This means principals must step up and congratulate their best-performers and those who have made great improvement in their instruction. It also means moving ahead with overhauling teacher evaluations. And it means ditching tenure, which protects laggard teachers and allows them to become disruptive presences, ostracizing the work of successful colleagues.

Errata: Looking at the rest of the school reform conversation.

When Being a Poor Man's Diane Ravitch Isn't Good Enough

Three Thoughts on Education This Week: The Endless Thoughtless Pursuits of the One Silver Bullet