Discussion about the reform of public education in the District of Columbia has long tended to be driven by two equally-true narratives. On one side, as reformers such as David Osborne of the Progressive Policy Institute correctly note, there is clear evidence that the three-decade-long effort to transform education in the Nation’s Capital is reaping some fruit. Fewer children are struggling with literacy while more high-quality teachers are working within its traditional district and public charter schools.

On the other side, news over the last few months that D.C. Public Schools allows children to graduate from high schools such as Ballou and Wilson despite high levels of absenteeism and unpreparedness for success beyond secondary school is a clear reminder that those efforts, especially within the district, have been plagued by allegations of test-cheating, favoritism to city officials, efforts to hide the overuse of out-of-school suspensions and other harsh school discipline by all school operators, and gamesmanship that have little to do with teaching and curricula.

But there is a third story in the District of Columbia, one that hasn’t been given much consideration by reformers or traditionalists: The state of access to college-preparatory coursework, from Algebra 1 courses in middle schools to Advanced Placement and trigonometry classes critical to success in American higher education. Based on a Dropout Nation analysis of Civil Rights data submitted by traditional district and charter schools to the U.S. Department of Education, the narrative that emerges should displease every D.C. parent, caring adult and political leader.

Regardless of whether a student attends a D.C. traditional district or charter, there is little likelihood of any of them gaining access to college-preparatory education. This is absolutely unacceptable.

Only one in six take physics: Few D.C. high schoolers are taking physics, a key course for gaining preparation for success in science and technology courses in higher education (and ultimately, higher-income careers in those fields after college graduation). Just 18.4 percent of all high schoolers in the Nation’s Capital took physics in 2013-2014; this included 19.4 percent of DCPS high schoolers and 16.8 percent of peers served by charters.

Few middle schoolers gain access to Algebra 1: Just 8.5 percent of the District’s seventh- and eighth-grade students take this important gateway course to other forms of math in 2013-2014. This includes a mere 9.3 percent of DCPS middle-schoolers and a woeful 7.6 percent of peers in charters. Put bluntly: D.C. children are losing out on future opportunities to learn.

Certainly it is clear in some ways that children in Washington are receiving higher-quality education than they did back in the 1990s, when DCPS was known as the Superfund Site of American public education.

The reform efforts within DCPS that began under Michelle Rhee and have continued under successors Kaya Henderson and Antwan Wilson helped more children gain the knowledge they need for greater chances of success. Charter schools also contributed to these improvements; the percentage of fourth-graders in charters reading Below Basic declined by 19 percentage points (from 64 percent to 45 percent) between 2005 (when NAEP began including charters in testing) and 2015, while the percentage reading at and above grade level increased by 12 percentage points (from 10 percent to 22 percent).

But as Dropout Nation‘s analysis demonstrates, far too many children, especially Black children (who make up 75 percent of high school students and 77 percent of middle-schoolers in the District’s traditional district and charter schools) continue to be shortchanged of the knowledge they need for success beyond their elementary and secondary years. This is especially clear when looking at how poorly charters in the city are doing in providing such opportunities to the children in their care compared to the traditional district. 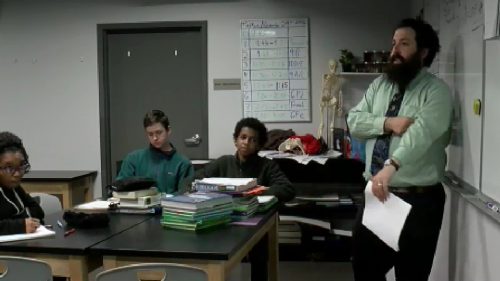 D.C.’s public charter schools have helped the District become a better place for children to learn. But their failures in providing college-preparatory courses is stunning and unacceptable.

Some charter school leaders will, of course, argue that this analysis is painting their operations with a broad brush. After all, some charters, most-notably See Forever Foundation’s Maya Angelou schools (which was featured in a Dropout Nation commentary seven years ago), focus on youth who previously dropped out of school or were incarcerated in the District’s juvenile justice system, and therefore, are working hard to stem the years of neglect to which those children were subjected while in DCPS.

Others such as the Knowledge is Power Program, which nationally has done a better job of preparing children for college completion than all but a few traditional districts, will likely argue that college preparatory curricula is already part of the agenda, and thus, AP isn’t needed. Some seem to be doing the work: Some 43 percent of Black high schoolers served by E.L. Haynes Public Charter School took physics in 2013-2014, one of the highest numbers among charters in the District in this category.

But it is hard for Friendship Public Charter Schools, one of the nation’s premiere charter school operators, to explain why it provided calculus and advanced math to 18.2 percent of Black high schoolers attending its schools (and 18.1 percent of its students overall). KIPP can’t explain with credibility why not one student regardless of background took physics that year.Or why BASIS, which has been ranked the top charter school in the District, only had four students —  out of 520 — taking advanced math and calculus in 2013-2014.

Excuses cannot and should never suffice when the numbers are absolutely woeful — and children are being denied high-quality opportunity. There are far too many charters that should be providing college-preparatory learning that aren’t doing so. Which is unacceptable in light of the charter school movement’s mission of providing all children with high-quality educational options that cannot otherwise be found within traditional districts.

As for DCPS? The good news is that it is doing better than its peers among charters in providing college-preparatory courses to its middle- and high school students. But as the data shows, the district is still doing poorly by far too many of our children, especially those Black and Brown. Given the latest news about graduation rate inflation and allowing children wholly unprepared for college and life to walk out of its schools with sheepskins, there is also reason to be skeptical about how well the traditional district is doing in actually educating the youth who are in those classrooms.

District of Columbia officials, including Mayor Muriel Bowser (who oversees DCPS), the city council and the Public Charter School Board need to put pressure on all school leaders to step up and provide all of the city’s children with high-quality education. [Congress, which has oversight over the District, should also help. But given the penchant for doing harm, it may as well stay out.] This includes doing better in providing information to families on how they can access college-preparatory courses, continuing to overhaul elementary and preschool curricula (a reason why so few children gain access to college preparatory courses down the road), and pushing both DCPS and charter school operators to ensure that all children are given the classes they need for lifelong success.

Reformers at the national level must also play their part, holding their counterparts in D.C. (and in other districts and school operations inside the Beltway) to account for failures to meet the high expectations we implicitly set for school operators in the rest of the nation. The District must be the model for transforming public education and ensuring high-quality options, curricula, and teaching for all children, especially those Black and Brown.

Certainly the progress being made in D.C.’s district and charter schools should be noted — as should the failures in leadership that still remain. But that isn’t enough. It is also time to address the failures of the District’s school operators to help the children they serve gain college-preparatory learning they need and deserve.