Between 2002 and 2015, the years under which George W. Bush and Barack Obama presided over federal efforts to spur systemic school reform that included the now-abolished No Child Left Behind Act, the number of functionally-illiterate fourth graders, those reading Below Basic on the National Assessment of Educational Progress, declined by 172,078 children. In that same period, the percentage of functionally-illiterate Black fourth-graders declined by 12 percentage points in that same period (from 60 percent to 48 percent) while the percentage of Latino fourth-graders struggling with literacy declined by nine percentage points (from 43 percent to 34 percent), and a 10 percentage point decrease in the number of fourth-graders on free- and reduced-priced lunch programs reading Below Basic (from 54 percent to 44 percent).

These improvements resulted in part from No Child’s Adequate Yearly Progress provision, which required states to meet their obligations under their own constitutions to provide children in public schools with high-quality education and hold districts and other school operators accountable for failure mills and dropout factories they run. Suburban districts could no longer continue to commit educational malpractice against poor and minority children. School operators had to focus on achieving measurable results instead of damning kids to low expectations. Data became critical to providing all children with high-quality teaching, curricula and cultures. 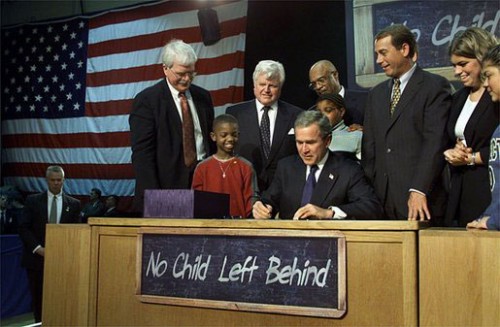 Under George W. Bush and Barack Obama, fewer children were functionally illiterate and more went on to success in adulthood. This is unlikely to happen during the Trump era.

The improvements in education didn’t come just through efforts in traditional districts. As part of their reform efforts, the Bush and Obama administrations continued the effort first began under Bill Clinton to provide more children with opportunities to attain high-quality education they need and deserve. This includes the opening of 4,179 charter schools between 2002-2003 and 2014-2015, according to the U.S. Department of Education, as well as the launch of school voucher programs in Florida, Indiana and Louisiana.

Thanks to high-quality charter schools in urban communities, children in those schools gain 58 additional days of learning in math and 41 additional days of learning in reading compared to peers in traditional districts. More importantly, as seen with charter school operators such as the Knowledge is Power Program, charters have improved the chances of poor and minority children graduating from traditional colleges, community colleges, technical schools and apprenticeship programs (usually run through community colleges) that make up American higher education.

The point in citing these facts? That contrary to the assertions made yesterday by U.S. Secretary of Education Betsy DeVos, the reform efforts led by Bush and Obama (and their education secretaries) that began with the passage of the No Child Left Behind Act and accelerated with Race to the Top achieved measurable and quantifiable results that improved the lives of so many of our children.

From the accountability provisions that forced states to focus on achievement gaps, to the expansion of charter schools, vouchers and other forms of choice, to support for implementation by states of Common Core reading and math standards first developed in the first decade of this century, to the efforts under the Obama Administration to end the overuse of out-of-school suspensions and other forms of harsh school discipline (as well as criminalization of youth), both Bush and Obama spurred reforms (including the charters and vouchers supported by DeVos herself in her previous role as a school reform philanthropists) that have helped more children gain the knowledge they need to succeed in adulthood.

This is not to say that the efforts were unqualified successes. Nothing done by man will ever be. No Child’s focus on basic literacy and numeracy, a reflection of the mission of the school reform movement for most of its modern history, no longer suffices in an age in which some form of higher education is critical to economic, social, and political success. The Obama Administration’s No Child waiver gambit, which began the evisceration of accountability that continued with the passage of the Every Student Succeeds Act two years ago, was arrogant policymaking and sloppy implementation that has harmed systemic reform. Just as importantly, as Dropout Nation has consistently pointed out and as exemplified by the latest edition of the Trends in International Mathematics and Science Study, the need to continue systemic reform remains paramount.

Yet the data (along with the long history of  proves beyond a shadow of a doubt that the Bush and Obama administrations successfully embraced the federal government’s necessary, constitutional and life-affirming role in ensuring that every child, especially poor and minority children served poorly by American public education, get a chance at high-quality education. The administrations achieved measurable results that are important steps in helping all children succeed — if DeVos and the Trump regime (along with congressional leaders and those at the state level) bother to do their parts. 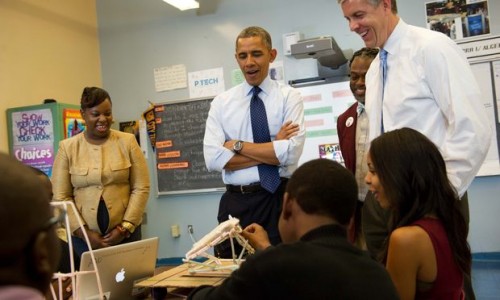 Barack Obama didn’t always get it right on education policy. But his administration got it right a lot of the time. Which is saying something.

DeVos’ sophistry, however, isn’t shocking. After all, she gave her speech at an event held by the American Enterprise Institute, whose education czar, Rick Hess, has long opposed focusing on stemming achievement gaps and has generally been, to say it kindly, not all that interested in building brighter futures for the poor and minority children harmed the most by the failures of American public education.

More importantly, DeVos’ dismissal of the need for a strong federal role in education policy and protecting the civil rights of Black and Brown children is reflective of that of the administration in which she serves.

As we already know, President Donald Trump spent the last week doubling down on his White Supremacist rhetoric when he called several African nations which account for the bulk of immigrants to the United States (as well as Haiti) “shitholes”, expressed his preference that the nation bring in more emigres from Norway and other European (White) countries, and dismissed concerns from the Congressional Black Caucus, whose members represent Black and Latino children (as well as their communities) on Capitol Hill.

The statement, which came during a meeting over an increasingly-unlikely deal to stop the deportation of 760,000 youth, young adults and classroom teachers previously covered under Deferred Action for Childhood Arrivals, once again highlights the reality that the Trump Administration’s long-term goal is what can best be called low-grade ethnic cleansing against immigrants and Native-born Americans who aren’t Caucasian.

DeVos, along with erstwhile school reformers working at the Department of Education, have been willing collaborators in the administration’s war against poor and minority communities. This includes moves to weaken and end Obama-era efforts to stem overuse of suspensions (as well as use of restraints and seclusion practices that harm children condemned to special ed ghettos), to supporting the expansion of 529 college saving accounts for K-12 expenditures that does little for poor and middle class families.

Meanwhile her unwillingness to condemn Trump’s rank bigotry and demagoguery demonstrates that she has little concern for the most-vulnerable children her agency is charged with protecting. Her allies will argue that her past record of advancing school choice proves otherwise. But her record since her nomination for the nation’s top education policy job makes lie of those claims. This is even without considering her general unfitness for her role.

One thing is ultimately clear: Neither Betsy DeVos nor her boss will be the champions for children their predecessors were. For that, and their general indifference to facts and truth, they should both be ashamed.