Over the past few months, New York State United Teachers got a lot of flack over the fact that its now-former Secretary-Treasurer, Martin Messner, was still teaching in the classroom even as he also oversaw its woeful finances. Of course in reality, Messner had spent most of his three-year tenure as the union’s financial overlord at its headquarters in the Albany suburbs, and only began teaching again this past September after his leave-of-absence expired. [There’s also the presence of an actual staff of finance people who do the day-to-day work of balancing books.] But that brief period of double duty made for some laughs at the union’s expense.

The reality of the union’s financial condition, however, is not a laughing matter. As a Dropout Nation analysis of its latest filing with the U.S. Department of Labor shows, the union’s pension and retiree healthcare woes continue to keep it in virtual insolvency.

As you would expect, NYSUT doesn’t have enough assets to cover those insolvencies. The union’s pension had $285 million in assets as of 2016, according to its filing with the U.S. Department of Labor. If you took that number, that still leaves $259 million in retiree pension and healthcare costs (along with other liabilities on the books), none of which would be fully covered by NYSUT’s $142 million in assets.

As with defined-benefit pensions run by states, districts, and the National Education Association (to which NYSUT is affiliated along with its status as the largest state unit of the American Federation of Teachers), NYSUT’s pension assumes an overly optimistic annual investment rate of return of 6.5 percent. Even in years in which those numbers can be made, NYSUT’s generous retirement age levels, under which an employee can head into retirement as young as age 55 with 10 years of service, adds additional strain onto finances. 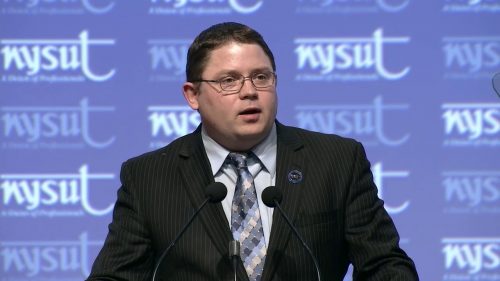 Former NYSUT Secretary-Treasurer Martin Messner got laughed at for both running the union’s finances while briefly teaching school. But the AFT affiliate’s woes are no laughing matter.

As a result of those increases, NYSUT generated $138 million in dues in 2016-2017, a 3.8 percent increase over the previous year. Overall revenue was $260 million, barely budging from last year. As you would expect, national AFT made sure to subsidize the affiliate; the $10.4 million it paid to NYSUT in 2016-2017 was 11.9 percent less than in the previous period. NEA provided $2.1 million last fiscal year, slightly less than in 2015-2016. NYSUT collected $1.8 million from its Teaching & Learning Trust, slightly more than in 2015-2016, while it garnered $6.6 million from its Member Benefits affiliate (which peddles annuities to the rank-and-file), a 5.7 percent decline.

The union did manage to hold the line on expenses. General overhead expenses of $6.4 million in 2016-2017 were three percent lower than in the previous period, while benefits costs of $43 million were just 1.4 percent higher than a year ago. As a result, NYSUT generated a surplus of $13 million, 8.5 percent lower than in 2015-2016.

NYSUT has no interest in paying down its pension and retiree health liabilities. But it does have plenty of desire to buy influence. The union spent $97.4 million in 2016-2017 on on lobbying, contributions to like-minded groups and spending on almost-always political “representational activities”. That’s lower than the $99.6 it spent in the previous year.

Advertising and messaging were the big spends for NYSUT. The union spent $296,315 with Visuality on social media efforts, dropped $21,950 on ads with Facebook, bought $5,152 worth of ads on Twitter, and put down $19,800 on ad space with Politico‘s Pro magazine to reach politicians and other players. The union spent another $84,565 on outdoor ads and public relations. Another $146,732 was spent on commercials with five outlets — public radio stations WAMC, WYNC and WXXI, as well as television stations WNYT and WWNY, which are dominate players in Upstate New York. NYSUT spent $39,150 with NGP Van, and dropped another $23,975 with Catalist, both key to the efforts of Democratic Party players.

Meanwhile NYSUT made sure to subsidize the UFT, the New York City local of AFT which effectively controls the state affiliate. NYSUT financed UFT to the tune of $14.5 million in 2016-2017, a 6.5 percent decrease from the previous period. UFT also owes NYSUT $10.8 million in accounts receivable, of which $4 million has been due for the past 90-t0-180 days. Too bad NYSUT isn’t doing much for the local in East Ramapo, whose district has been beset by a regime focused on damaging the futures of the kind of poor and minority children the union and its national parents claim to proclaim concern. The local there only received $17,240 in 2016-2017, less than the meager $17,732 it got in the previous period.

You can check out the data yourself by perusing the HTML version of the New York State AFT’s latest financial report, or by visiting the Department of Labor’s Web site.