As Dropout Nation readers already know, losing money and financial woes has tended to be the norm for a good number of National Education Association’s affiliates. The Big Two teachers’ union’s affiliates in Michigan, Illinois, and Wisconsin, along with the affiliate it controls with American Federation of Teachers in New York, have been virtually-insolvent for years thanks to unfunded defined-benefit pension liabilities, underfunded employee healthcare costs, and loss of rank-and-filers who pay the bills.

But NEA has managed to stave off such losses — until now. An analysis of its latest financial report reveals that the nation’s largest teachers’ union lost money in its last fiscal year. This can be blamed on several proverbial paper cuts that may get worse is a Supreme Court ruling hits its finances and ability to preserve influence.

A 6.7 percent increase in pension payments (from $20.7 million to $21.1 million) has also added to the union’s fiscal burdens. These cost increases offset a 4.3 percent decline in general overhead and 5.8 percent decrease in union administration costs. Considering that the pension expects benefit payouts to increase by 16.5 percent (from $58 million to $68 million) between 2018 and 2025, NEA’s own pension costs will increase dramatically. Especially since the pension itself is in bad shape. It doesn’t have enough assets to cover $140 million in unfunded liabilities — and it has at least $21 million in unfunded commitments to hedge funds and other private-equity investments, according to the plan’s filing with the Department of Labor. The $140 million in unfunded liabilities, by the way, is a 54 percent increase over insolvency levels in 2014.

None of this is surprising to NEA’s own staffers. Last year, the National Staff Organization, which represents the union’s workers, announced that a memorandum of understanding with NEA over fully funding the pension was suspended because “troubling challenges have developed that are making it more difficult to reach full funding by December 31, 2021”. The challenges that plague defined-benefit pensions run by states and districts that NEA wants to keep in place and keep effective control over — including overly optimistic rates of return on investments and the decline in current workers paying into the plan compared to retirees — are also a problem for the union itself.

Of course, as with AFT, NEA now offers its own defined-contribution plan, which has some $172 million in assets. But the defined-benefit pension’s woes will loom over the union’s finances for decades to come.

Meanwhile NEA isn’t growing its rank-and-file numbers enough to offset these costs. The union added 18,985 rank-and-filers and agency fee payers to its ranks in 2016-2017, according to its disclosure to the U.S. Department of Education. That equates to an anemic six-tenths of one percent increase over levels during the previous year. Anemic as those numbers are, at least NEA can say that it has increased its ranks for a second consecutive year. 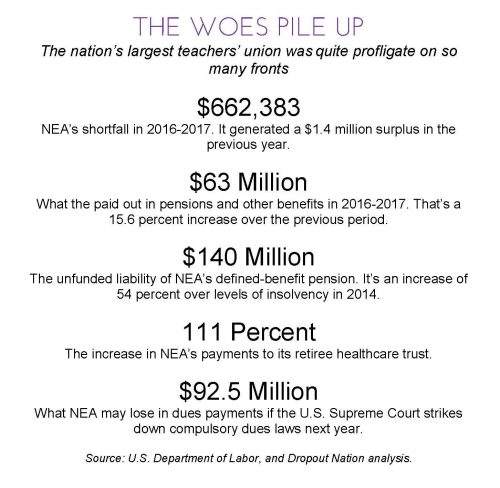 Much of that growth can be credited to NEA’s joint affiliate with AFT in Florida, the Florida Education Association. Rank-and-file numbers increased by 2.8 percent (from 128,485 in 2015-2016 to 132,055 in 2016-2017). Another growing affiliate: The Ohio Education Association, which increased its rank-and-file by 1.4 percent (from 121,782 to 123,453). Growth for both affiliates offset nonexistent increases for other affiliates as well as the continued woes of NEA’s Wisconsin unit and the Michigan Education Association (whose rank-and-file numbers declined by 2.8 percent over the same period). Thanks in part to the growth, NEA collected $370 million in dues last fiscal year. That’s a nine-tenths of one percent increase over 2015-2016.

But trouble looms over the horizon. If the U.S. Supreme Court strikes down compulsory dues laws (and the ability of NEA and other public sector unions to force employees to pay into its coffers even if they don’t want to) as expected in Janus v. AFSCME, the union and its affiliates will lose big. Based on earlier analysis, Dropout Nation determines that NEA could lose at least 25 percent of rank-and-filers, or 768,710 teachers and other school employees. That would equate to a $92.5 million decline in dues payments, which would cripple the union’s ability to finance its influence-buying.

This reality is one reason why NEA is already advising affiliates and locals to come up with new schemes to keep the dues flowing even if compulsory dues laws are struck down. This includes forcing rank-and-filers to sign membership renewal documents that will allow affiliates to automatically deduct from payrolls for years to come unless they opt out in writing; this is being done by the union’s Education Minnesota affiliate. Other affiliates may try to write similar agreements into collective bargaining agreements, a tactic tried by the Michigan affiliate that was struck down by state courts a few years ago.

Of course, none of these steps have anything to do with actually providing services that teachers need in order to do their jobs, something that NEA and its affiliates should be doing in the first place. The fact that teachers mostly contact their locals for help when necessary means that in many cases, the locals could simply cut out NEA national (along with the state affiliates) and operate on their own. The NEA affiliate in Clark County, Nevada, which has had woes related to its busted voluntary employee benefits association, may end up being one of the first of many locals that leave the NEA fold; the union’s former Memphis local did so earlier this year.

As for overall revenues: NEA generated $385 million in 2016-2017, a slight drop over revenue levels in same period last year. One reason for the decline: A 33 percent decline in dividends it collected from its investment portfolio (from $1.5 million in 2015-2016 to a $970,223 last fiscal year). Mike Antonucci goes into detail about NEA’s investments in Corporate America. But it suffices to say that it could do better on that front.

Another factor in NEA’s revenue decline: NEA Member Benefits, the financial scheme the union runs to peddle annuities to its rank-and-file and get kickbacks from Wall Street. NEA collected just $2.3 million from Member Benefits in 2016-2017, a 72 percent decline from the previous year. [As for NEA Member Benefits?It generated $97 million in 2016, a 1.4 percent decrease over revenue in the previous year, according to its tax filing with the Internal Revenue Service; while it continued to sell annuities at a brisk pace, the decline can be attributed to a 19.6 percent decline in investment income.]

But not everyone took a hit to their wallets. Marcus Egan, NEA’s chief lobbyist, got a raise; he was paid $208,702 in 2016-2017, a 7.9 percent increase over the previous year. Rocio Inclan-Rodgriguez, the senior director in charge of the union’s efforts to portray itself as a social justice group (and co-opt progressive and old-school civil rights groups), also got a raise. She was compensated to the tune of $259,250 last fiscal year, an 11 percent increase over the previous period.

You can check out the data yourself by checking out the HTML and PDF versions of the NEA’s latest financial report, or by visiting the Department of Labor’s Web site. Also check out Dropout Nation‘s Teachers Union Money Report, for this and previous reports on NEA and AFT spending.