Your editor could have spent this morning focusing on news from yesterday’s news from Bellwether Education Partners that the state plans proposed as part of implementation of the Every Student Succeeds Act show that districts are going to be allowed to perpetuate harm to poor and minority children. But that point was made earlier this month. There’s also the dueling studies from Thomas B. Fordham Institute and University of Pennsylvania’s Consortium on Policy, Research and Education on Philadelphia’s efforts to overhaul school discipline. Being ill for the past few days, I’ll be tackling them in the next week.

What is on my mind has less to do with the details of policy. Instead, it is about an important lesson reformers should be learning today from Doug Jones’ victory yesterday over the notorious Roy Moore in yesterday’s Alabama U.S. Senate special election: The need to rally poor and minority communities in advancing systemic reform to help all children.

As many of you know by now, Jones, a former U.S. Attorney and scion of a political family that includes famed judge and U.S. Senator Howell Heflin, won what was previously considered an unlikely victory over Moore, a jurist who was twice removed from his role as chief justice of the Iron State’s supreme court for willfully ignoring failing to enforce federal rulings. A Democrat will now hold a U.S. Senate seat for Alabama for the first time in 20 years despite the state having a strong Republican majority and the efforts of President Donald Trump in the last few weeks to help Moore into office.

Certainly Jones was helped by Moore’s own problems. This included revelations over the past two months that he had engaged in sexual misconduct with at least six women under age 18 back when he was a district attorney during the 1970s and 1980s. That news, along with the threat Moore posed to the tenure of Mitch McConnell as senate majority leader, gave Congressional Republicans a convenient excuse to withdraw financial and political support for his campaign, and even led outgoing Arizona Sen. Jeff Flake to publicly support Jones’ run. Even without backing from those who could have been his colleagues in the senate, Moore still managed to garner 48.9 percent of voters.

What really mattered for Jones had little to do with Moore, but with the strong turnout among Black and other minority communities in Alabama. Exit polling conducted by the Washington Post shows that Black voters made up 28 percent of the electorate yesterday, a higher level of turnout than their overall numbers among all registered voters. More importantly, Black voters turned out at levels just a quarter or so below those of last year’s general election. In Jefferson County, home to Birmingham, Alabama’s largest city, turnout was at 72 percent of levels last year, according to an analysis of data by Daily Kos.

Given that special elections in general attract significantly lower levels of voter turnout, the high levels are astounding. Especially when you consider that Alabama Republicans in control of state government have worked for the past decade to disenfranchise minority voters through efforts such as closing motor vehicle branches in Black communities, a key way of frustrating voter registration. Add in the fact that Jones attracted 60 percent of Alabama voters age18-29 and 61 percent of those in the 29-to-44 demographic — especially in a state in which Mitt Romney won the majority of them five years ago — and the results stand out. 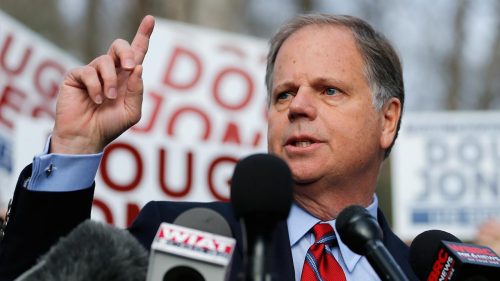 Without Black votes as well as those of young people, Doug Jones would have never beaten Roy Moore in yesterday’s U.S. Senate race.

How did Jones manage to get more minority voters (as well as young voters) to support his bid? That credit goes to grassroots advocates, including Black churches and branches of the NAACP, who, with the help of national outfits, conducted strong get-out-the-vote campaigns on behalf of Jones and, more-importantly, against Moore. Activists reminded Black communities that a Moore victory would ultimately help the Trump Administration in its war on their communities and their children. They also noted that Jones’ victory takes away a seat from Senate Republicans, who now hold just a one-seat majority, making it even harder for them to pass measures such as the Tax Cuts and Jobs Act that have little support even within the caucus.

Put simply, contrary to the arguments of many White Democrats (as well as pundits such as Jonathan Chait of New York, Frank Bruni of the New York Times and academic Mark Lilla), focusing on the efforts of Black, Latino, immigrant, and low-income communities for economic, social and political equality (which has often been derisively called “identity politics”), is critical to Democrat success in winning elections as well as in winning support from younger voters who are also concerned about these matters. Based on yesterday’s vote, as well as last month’s general election victories (in which Black, Latino, and immigrant votes played prominent roles), White Democrats should stop ignoring minority communities and put money into registering more of them (as well as fighting voter suppression efforts in states).

But it isn’t just important for the Democratic National Committee. The school reform movement must also embrace explicit and constant advocacy for poor and minority children and their communities as a critical component in advancing the transformation of American public education.

Reformers shouldn’t be divided over this at all. After all, as recent studies of the now-abolished No Child Left Behind Act has shown, focusing on socioeconomic achievement gaps improves outcomes for minority and White children (as well as struggling and high-achieving children of all backgrounds). More importantly, the most-successful efforts to expand school choice (including Virginia Walden Ford’s work in Washington, D.C., Steve Barr’s work with Latino communities in Los Angeles, and Parent Revolution’s Parent Trigger efforts), have been ones led by poor and minority communities who explicitly made the case for helping their own children escape failure mills that damaged their families for generations.

Yet this is is a point over which the movement has become divided. Conservative reformers balk over this because they still embrace a perspective, driven by their ideological conservatism, that chooses to ignore the legacies of state-sanctioned bigotry (from slavery to Jim Crow to the drug war) that are still reflected in American public education. Centrist Democrat reformers, on the other hand, prize political bipartisanship and getting “the politics” right over doing good, often at the cost of the vulnerable, failing to realize that bipartisanship and politics are only valuable if driven by the most-important goal nonnegotiable goal of helping those who are in need.

What has become clear is that explicitly focusing on the educational concerns of poor and minority children regardless of where they live, and expanding that to the criminal justice reform and other the social issues that end up touching (and are touched by) American public education, is critical, both in helping all children succeed as well as rallying long-terms support for the movement from the parents and communities that care for them. For those families, school reform must be invested in bettering the communities in which they live and in empowering their children to be leaders in adulthood. Anything less is unacceptable.

This starts by embracing the lessons learned by Barr, Ford and others in advancing reform. It means listening to communities as well as addressing the issues outside of education policy and practice that are of immediate concern to those communities. It also includes working with the churches and community organizations connected to the people who live in them, as well as working with national groups focused on issues that tie to education, including criminal justice reform. It even means philanthropists working outside of their comfort zones and supporting reform groups led by minority communities who have a better sense of the people they serve.

Reformers must also focus as much on the nuts-and-bolts of retail and wholesale politics as they do on working statehouses and policymakers. Recruiting men and women from Black, Latino, and other minority communities to run in school board races and other political campaigns is one critical step. Another lies in holding voter registration drives, which will help bring new voters to the polls and even help reformers prove their value to the politicians they need to help pass legislation. This includes targeting high school seniors who will soon leave school and become voters (as well

Finally, reformers have to go back to embracing the approach of addressing and stemming socioeconomic and racial achievement gaps, a strategy that was at the heart of No Child and a driving force in expanding charter schools and other forms of school choice. Contrary to the arguments of some conservative reformers, focusing on achievement gaps even helps White middle class children by improving the quality of teaching, curricula and school environments all students experience.

As Jones learned last night, and other Democrats have realized over the past month, boosting support from poor and minority communities is critical to winning the day. The lessons also apply to school reformers working to build better lives for our children.

The Conversation: Dr. Steve Perry on Charters, Choice and Integration