RiShawn Biddle
Comments Off on When Accountability Isn’t

There is little evidence that states will do a better job of holding districts and other school operators accountable under the Every Student Succeeds Act than they did under the Adequate Yearly Progress provision of the No Child Left Behind Act. If anything, based on what we are learning so far, states are more-likely than ever to let districts perpetuate harm to poor and minority children. And despite what some reformers want to say, there is way to sugar-coat this reality.

No one can blame you for thinking otherwise if you only pay attention to the Thomas B. Fordham Institute’s analysis of state rating systems proposed in ESSA implementation plans released this week. From where it sits, seven states (Arizona, Arkansas, Colorado, Georgia, Illinois, Oklahoma, and Washington) will implement rating systems that clearly label how well districts and schools are performing, requires a “focus on all students” by looking at test score growth data instead of proficiency levels, and, through growth measures, fairly assess how districts and schools are improving achievement regardless of the children they serve.

Two-thirds of the states reviewed all clearly label district and school performance to Fordham’s satisfaction, and 37 states focus on student growth instead of just on improvements in student proficiency, ensuring to the think tank’s satisfaction that the “high-achieving students” it cares most about are being served. Declares Fordham: “states, by and large, seized the ESSA opportunity to make their school accountability systems clearer and fairer.”

Your editor isn’t exactly shocked about Fordham’s happy talk. After all, the conservative think tank long opposed Adequately Yearly Progress because it focused states on improving achievement for the 64 percent of children (many of them poor and minority) who are poorly-served by American public education. This despite ample evidence that focusing on achievement gaps helps all children — including high performers — succeed academically. So it isn’t a shock that Fordham favors accountability systems that focus less on how well school operators are helping the most-vulnerable. Put simply, Fordham continues to embrace neo-eugenicist thinking long proven fallacious (as well as immoral) that fails to acknowledge that American public education’s legacy practices are not worth preserving.

The flawed thinking is more than enough to render Fordham’s analysis suspect. But there are other problems with the analysis that render it all but useless. 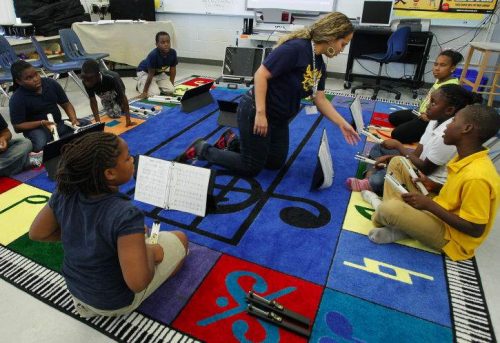 There’s the fact that the rating systems may not actually be as “clear” in identifying school and district performance as Fordham wants to think. This is because the think tank didn’t fully look at how the underlying formulas for measuring achievement will actually play out.

Consider Maryland, the home state of Dropout Nation (as well as that of Fordham President Michael Petrilli, his predecessor, Chester Finn, Jr., who now sits on the state board of education there, and former colleague Andy Smarick, who is president of that body). Fordham rates the Old Line State’s proposed rating system “strong” for being simple and clear with a five-star system that “model immediately conveys to all observers how well a given school is performing”.

But as Daria Hall of the Education Trust noted at a conference last month, a district or school in the state can still receive a five-star rating under the state’s ESSA plan despite doing poorly in improving achievement for Black or Latino children under its care. One reason: Because neither proficiency nor test score growth count towards more than 25 percent of a district’s rating, effectively hiding how districts are actually improving student achievement. Another lies in the fact that while the state will measure all subgroups, it doesn’t explain how it will account for each within the ratings.

Then there’s Maryland’s Plessy v. Ferguson-like proficiency and growth targets, which essentially allow districts to not work toward 100 percent proficiency for all children. The state only expects districts to improve Black student achievement from 23.9 percent in 2015-2016 to 61.9 percent by 2029-2030 (versus 52.9 percent to 76.5 percent over that period for White peers). This means that districts are allowed to subject Black and other minority children to the soft bigotry of low expectations. Add in the fact that the Maryland’s ratings don’t account for how districts and schools are preparing kids for success in traditional colleges, technical schools and apprenticeships that make up American higher education, and the rating system is not nearly as clear as Fordham declares.

This lack of clarity isn’t just a Maryland problem. As Bellwether Education Partners notes in its review of state ESSA plans, the addition of multiple measures of district and school performance (including chronic absenteeism indexes that aren’t broken down by subgroup) means that the rating systems will likely be a muddle that ends up hiding how well or poorly school operators are serving children. This muddle is likely the reason why only Tennessee and Louisiana were able to provide data showing how their ratings would identify failure mills, as well as improvements in student achievement for poor and minority children, in real time.

Another problem: Many states are using super-subgroups (now called supergroups under ESSA), a legacy of the Obama Administration’s shoddy No Child waiver gambit, that essentially lumps all poor and minority children into one category. Because super-subgroups lump children of different backgrounds into one category, the measure hides a district’s failure to help the worst-served children succeed and thus, allows it to not address its failures. Put simply, a state rating system can be simple and clear and yet still not tell the truth about how districts and schools are serving every child in their classrooms. 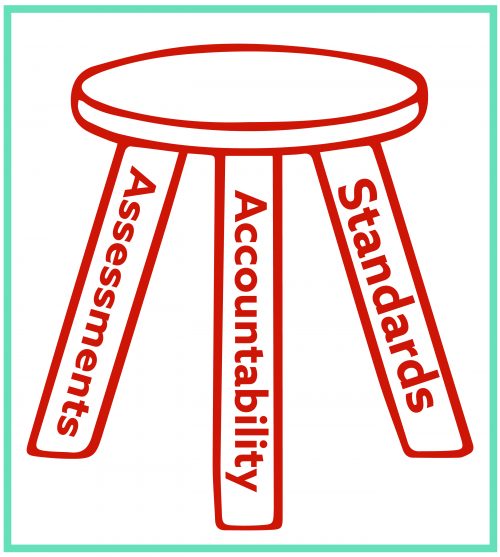 Accountability is more than just a school rating system. Consequences must be tied together with data and standards for children, families, and taxpayers to be served properly. [Image courtesy of the Education Trust.]

One state using super-subgroups is Florida, whose school rating system uses super-subgroups instead of thoroughly accounting for Black, Latino and other poor and minority children. Essentially, without accounting for either proficiency or growth for each group, the ratings will not fully inform anyone about how well districts are serving children.

The deliberate decision to ignore how districts and schools serve the most-vulnerable (along with the Sunshine State’s request to not use test data from its exams for English Language Learners in accountability) has led Leadership Council on Civil and Human Rights, along with a group that includes EdTrust, NAACP’s Legal Defense Fund, and UnidosUS, to ask U.S. Secretary of Education Betsy DeVos to reject the entire proposal. By the way: Fordham ranked Florida’s school rating system as “strong” in two out of three categories it analyzed.

But the biggest problem with Fordham’s analysis is that continues to embrace a flawed theory of action: That mere transparency suffices as a tool for accountability and, ultimately, holding school operators (and ultimately, states) responsible for fulfilling their obligation to help children succeed.

This approach, which Fordham first embraced during the implementation of Common Core reading and math standards, is based on the idea that only high-quality data on district, school, and even teacher performance is needed for policymakers and others within states to hold bad actors accountable. Essentially, there will be no need for the federal government to force states to fulfill their responsibilities to children, as it did through No Child’s AYP provision.

But as seen with the failed effort to implement Common Core-aligned tests produced by the PARC and Smarter Balanced coalitions, transparency-as-accountability only works if the mechanics are in place. School rating systems aren’t useful if the underlying data doesn’t actually reflect what is actually happening in schools. This will clearly be problems in Maryland and Florida, and will be just as problematic in other states. California, for example, was dinged by Bellwether in its recent round of reviews for failing to longitudinally measure student achievement, a better way to account for changes in school populations over time. [This, in turn, is a result of Gov. Jerry Brown’s moves over his tenure to sabotage the state’s school data system.]

School rating systems and other forms of transparency are also insufficient in spurring accountability if there aren’t consequences for continuous failures to meet the grade. Accountability as Sandy Kress, the mastermind behind No Child, points out, is a three-pronged approach that includes consequences as well as high-quality standards on which school ratings (and the measuring of improvements in student achievement) are to be based. Few states have explained in their ESSA plans how they would force districts and other school operators to overhaul their schools or shut them down altogether and let children go to high-quality charter and district options. 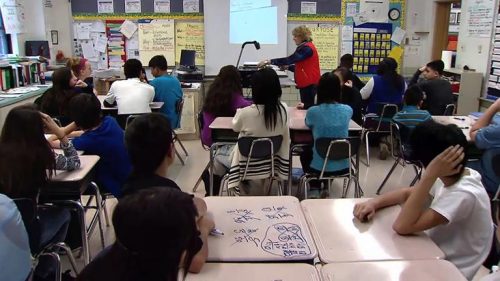 The high cost of the rollback of accountability will be felt by the next generation of children — and even harm the beneficiaries of No Child’s now-abolished Adequately Yearly Progress regime who are now in our high schools.

Few states are going beyond the federal requirement to identify the lowest-performing five percent of schools. Louisiana, for example, plans to go above and beyond by identifying (and forcing the overhaul) of the 17 percent of schools that are failure mills, while New Mexico requires districts to use an array of approaches to turn around low-performing schools. California, on the other hand, hasn’t even submitted a plan on how it will identify failure mills much less hold them accountable. [It supposedly plans to do so by January.]

It gets even worse when it comes to how states will ensure that districts provide poor and minority children with high-quality teachers. As the National Council on Teacher Quality details in a series of reports released Tuesday, just seven states offer timelines on how it will improve the quality of teaching for Black, Latino, English Language Learners and other vulnerable children, as well as the rates by which it will improve teacher quality for them. Given that teacher quality isn’t even a measure in any of the proposed school rating systems, states have missed an important opportunity to bring transparency and consequences to their public school systems.

Given that so few states are being concrete about how it will help kids stuck in failure mills succeed, the school ratings will be little more than some stars and letters on computer screens.

Two decades of research have proven that accountability works best when there are real, hard consequences for districts and schools failing to improve student achievement. No Child’s Adequate Yearly Progress provision, which worked alongside accountability systems states either already developed or had put in place after the provision was enacted, spurred improvements in student achievement that have led to 172,078 fewer fourth-graders being illiterate in 2015 than in 2002, the year No Child became law.

Yet what ESSA has wrought so far are school rating systems that are likely to do little on behalf of children who deserve better. The benefits of clear data tied with real consequences have now been lost. If accountability is only toothless transparency, then it is neither sufficient nor necessary to help all of our children succeed in school and in life. There is no good news to be had. None at all.

On the RoadThis is Dropout Nation