RiShawn Biddle
Comments Off on Making History and Civics Personal

The most-important way to learn and appreciate the fullness of American history, to fully understand how we have both lived up to its ideals and yet remain far from making them real, and to comprehend how the past shaped our civics, won’t from simply reading dusty history books. It comes from looking at the graves of people named John and Monica, from visiting the lands owned by women named Eliza and Mary, from reading deeds and Census records that detail their lives, and from understanding how our own family histories intertwine with the nation’s struggles towards progress and liberty for all.

This is a lesson our teachers, school leaders, and school operators must embrace in order to help all children gain the proper civics and history education they need to be the leaders and citizens their communities need them to be, as well as to continue bending the arc of the nation’s history towards progress.

Prompting this discussion was last month’s Dropout Nation essay on one of my ancestors, Sampson Moore, and how learning about the lives of enslaved Africans, as well as the oppression they endured, is critical to improving history, civics, and social studies. More than a few readers thought it would be interesting if children learned about American history through their own genealogies. Which makes sense. The more-relevant we make lessons to the lives of the children in classrooms, the more-likely they will gain the knowledge and understanding needed to be fully part of the great experiment called America in adulthood.

Making history and civics relevant and personal is especially important in a time as turbulent as those of the past. Even as think tanks and pundits such as the Brookings Institution and Chester (Checker) Finn, Jr. bemoan polls showing that some collegians have little understanding about the Bill of Rights and civil liberties (as well as the usual and often overblown complaints about freedom of speech on college campuses), they fail to grasp an important reality: That many adults have little understanding about American history and about the development of civil liberties. This is because they were never properly taught in the first place, and because such exercises such as reciting the Pledge of Allegiance are mere propaganda exercises that don’t build proper appreciation. Proper teaching of American history – and ultimately, a strong appreciation of its past and present – begins with placing their lives and that of their families in the contexts of those developments.

The best part is that making history personal and relevant doesn’t take that much effort. Thanks to professional and amateur genealogists, the wide array of historic preservation efforts, the digital release of narratives such as those of former slaves recorded by the Federal Writers Project in the 1930s, and even works of scholarship from historians such as Wilma Dunaway, any teacher, school leader, or operator can craft history and civics curricula that make cold facts personal. This can easily be seen in Bowie, a city in Prince George’s County, Md., that is also the home of this publication. 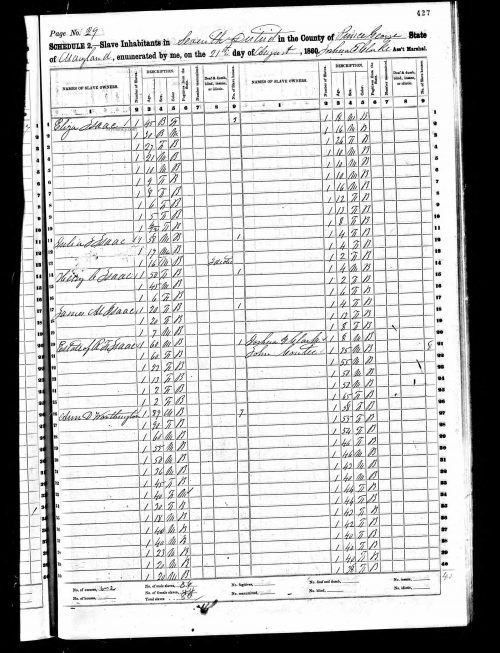 Documents such as the U.S. Census Bureau’s schedules of slave ownership can be used along with other sources to make American history relevant to the lives of children.

A teacher at Samuel Ogle Middle School in Bowie, Md., the home base of this publication, could begin that education just by taking children to one of the many old churches and grave sites in the community. There’s the famed Sacred Heart Catholic Church. There, the teacher can tell children how it played a role in advancing religious freedom, especially as the site of the founding of the nation’s first Roman Catholic diocese in 1789, and the consecration of John Carroll as the nation’s first bishop.

She can also explain how the church and the priests who worked there maintained the institution of slavery that is at the heart of America’s Original Sin, as the centerpiece of the White Marsh plantation that financed Georgetown University and, through a series of sales, breaking up Black families and sending them as far as Louisiana, where they endured even more oppression. Thanks to Georgetown’s project on the slaves owned by the Jesuit order (as well as by the priests personally), the students even see if their ancestors were enslaved on that plantation.

At Sacred Heart’s cemetery, a teacher can go to the grave of John Hawkins, which sits separate from those of White men and women who passed on to the hereafter. She can talk to them about how to research Census data from 1870 into 1910, two years before John died, and they can learn how had a wife named Hannah, had eight children. They can learn why we know so little about his life before 1870 — because Black people enslaved weren’t considered human beings, and thus, unworthy of having their lives recorded for posterity.

They can learn how he started out being illiterate, but ended up being able to read by the 1900 Census. They will also find out that John eventually managed to own his own land. They will also learn that this was a rare thing. Because of Jim Crow segregation laws that emerged amid Reconstruction in the 1870s, most Black people were forced into sharecropping, a system of renting land, equipment and even feed from former masters that often deprived them of the ability to earn a profit.

A teacher can then travel around some of the areas in their communities where people once lived and what used to be there. The Samuel Ogle teacher can take her students to a stretch of Gallant Fox Lane (named after the Triple Crown-winning horse bred on the nearby Belair Plantation), and talk about how it was once owned by Eliza Isaac, who was one of the few women in her time to own property of her own, and about a woman named Mary Brown, who managed to do the same. Back in the classroom, children can look up the acreage on Prince George’s County’s online atlas, then compare the current land to old maps dating back to 1861, and see how the community was mostly plantations and farms.

By researching the U.S. Census slave schedule for 1860, the students can learn that Mrs. Isaac owned 1o human beings as part of her worldly goods — including three little girls aged 4, 5, and 6. Through other books, the class will learn how those little girls had only a 50 percent chance of living beyond age 15 because they were often malnourished by slaveowners, and their mothers were forced to wean them off breastfeeding so they can feed the children of those who enslaved them. The students would then learn that if those little girls made it to adulthood, they were doomed for lives in which they would be passed down by the slave master to their children or worse, sold to another slave owner as if they were common goods. And if not for the Union’s victory in the Civil War, those little girls would have never become free. 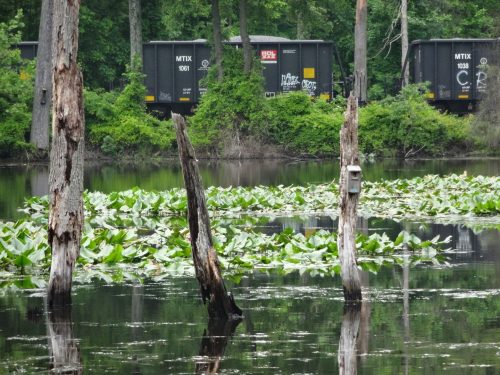 A trip to both historic places and land that has never been marked as historically significant such as this tract here can help children understand the development of American history over time.

But teachers and schools don’t even need to always go out in the field to provide children a comprehensive and personal understanding of American history. They can simply have children and youth trace their own genealogy to comprehend how the nation’s past affects their present.

During this exercise, a child may go on Ancestry or Family Search and learn about the life of an ancestor named Jacob. He will learn from the 1870 Census that he was born in Halifax County and lived in nearby Martin County. A search of Civil War records will tell him that Jacob fought for the 37th Colored Infantry, one of the first U.S. Army units that allowed Black people into the ranks, and that he likely fought in the Siege of Petersburg, one of the deadliest and most-important conflicts in the War Between the States. That child and his peers will learn in a personal way how Black men and women fought for their own freedom and for this nation even when it had no interest in making them full citizens.

Another child may research the 1860 Census and learn about an ancestor named Duncan, who was also born in North Carolina, but had arrived in Attala County, Mississippi by the 1850s. She will learn that Duncan was a White man who fought for the Confederate cause to keep Black people in bondage – and later helped enact Jim Crow laws that kept them from being full citizens for another century – even as he had 12 children with one of his slaves. Along with her schoolmates, the young woman will learn how the contorted, hypocritical situations in which more than a few White people owned their own relatives made slavery the peculiar institution. She will also gain an appreciation of how her ancestors (and even herself) benefited from institutions that oppressed enslaved Africans — including people who were also her family.

A third child may go to the passenger lists of immigrants arriving to the United States through New York City and learn about an ancestor named Francis, who arrived in this nation from Ireland during the Great Famine of 1845-to-1852. After learning about the bigoted policies that led to an economic and social catastrophe that included the deaths of one million people, he will learn how the lack of immigration laws allowed Francis and others were able to flee to safety in this country. The child will then learn how Francis and other Irish emigres were discriminated against by Protestant native-born Americans because they were Catholics — even when they volunteered and fought for the nation in the Civil War — and how bigotry towards them, as well as Chinese and Jewish emigres, led to the immigration laws and policies that deny people in situations just like that of Francis the ability to flee oppression and poverty.

Certainly there will be some who will object to such approaches to learning history. Some will say that such lessons are too harsh and traumatic for children to learn. Others will complain that it may paint a negative picture of the nation’s history. What the first group fail to understand is that children are incredibly capable of dealing with harsh knowledge about life. As for the second: The lack of honest knowledge not only contributes to their ignorance of history and civics, it even makes them unable to fully appreciate how far the nation has come (as well as how far it has to go).

What we owe to children as well as to our nation is history and civics instruction and curricula that makes the facts real and relevant to their lives. If we are to keep progressing as a nation, our education must also do better than be dusty and lifeless.