As this morning’s Teachers Union Money Report shows, the American Federation of Teachers knows how to spend well. Especially on its leaders and staff.

Whether or not it will be able to do so is a different story.

Some 236 staffers were paid six-figure sums in 2016-2017, according to the union’s latest disclosure to the U.S. Department of Labor. That is 14 more than in the previous fiscal year. That well-paid group includes Michelle Ringuette, the former Service Employees International Union staffer who is chief political aide to President Rhonda (Randi) Weingarten; she was paid $240,437 last fiscal year. Michael Powell, who is Weingarten’s mouthpiece, picked up $252,702 from the union.

Kombiz Lavasany, an AFT operative who oversees Weingarten’s money manager enemies’ list, earned $177,872 in 2016-2017. Kristor Cowan, who handles the union’s lobbying, collected $189,808 last fiscal year. Then there is Leo Casey, the vile propagandist who currently runs the union’s Albert Shanker Institute; he was paid $232,813 in 2016-2017 for doing, well, whatever Leo does these days that doesn’t include accusing reformers of committing “blood libel“.

Of course, the leaders are well-paid. Weingarten was paid $492,563 in 2016-2017, just a slight decrease over the previous year. She still remains among the nation’s top five percent of wage earners, and thus, an elite. Her number two, Mary Cathryn Ricker, was paid $337,434 last fiscal year (an 8.3 percent increase over the previous period), while Secretary-Treasurer Loretta Jonson was paid $392,530 in 2016-2017, a 9.6 percent increase over the past period. Altogether, AFT’s top three took home $1.2 million last fiscal year, virtually unchanged from the same time in 2015-2016. 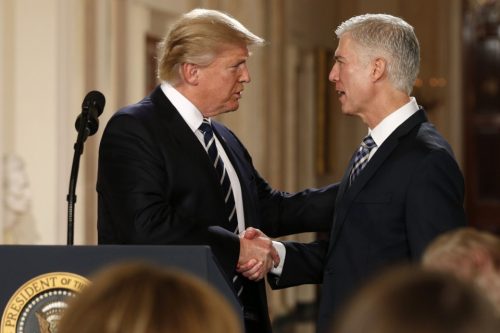 The current occupant of the White House’s appointment of Neil Gorsuch to the U.S. Supreme Court dooms the financial and political future of AFT — and even has risks for some players in the school reform movement.

The additional salaries and bodies explain why AFT’s union administration costs increased by 17.8 percent (to $10.2 million) over 2015-2016, while general overhead costs increased by 14 percent (to $42 million). The union still managed to keep benefits costs from increasing. It spent just $10.4 million in 2016-2017, barely unchanged from the previous period; that can be credited in part to the fact that, unlike the districts its rank-and-file work in, AFT doesn’t provide defined-benefit pensions and only gives its workers defined-contribution plans that the union can avoid contributing to during times of financial stress.

It takes a lot of money to keep Weingarten and her team on board. Of course, they can thank compulsory dues laws that force even teachers who don’t want to be part of AFT. But those dollars are on the decline.

Another factor lies in the move last year by United Teachers Los Angeles to jointly affiliate with the National Education Association. That move contributed to a 23 percent increase in the number of AFT rank-and-filers in affiliates also tied to NEA and other rival national unions (to 158,225 from 128,221). With more states attempting to end compulsory dues laws, a possible U.S. Supreme Court law striking them down altogether, and a desire by state and local affiliates to wield more influence in education policy at all levels, expect more AFT affiliates (and even some NEA affiliates) to also align themselves with other national unions.

Overall, AFT generated revenue (including debt borrowings) of $332 million in 2016-2017, a 1.2 percent increase over the previous year. This included $88.2 million it borrowed during the year to shore up operations (of which $68 million was repaid by the end of the fiscal period); that’s 59 percent more than the amount the union borrowed in 2015-2016. Excluding the borrowing, AFT’s revenue for 2016-2017 was $244 million, virtually unchanged from the previous year.

But as today’s report notes, AFT faces trouble in the next year. If the U.S. Supreme Court strikes down compulsory dues laws as expected in Janus v. AFSCME, the union and its affiliates will lose big. The union has already seen its affiliate in Wisconsin attempt a merger with NEA’s Wisconsin Education Association Council after losing half of its rank-and-file since the state abolished its compulsory dues law six years ago. [The merger was aborted because of the difficulty of merging dues structures.] 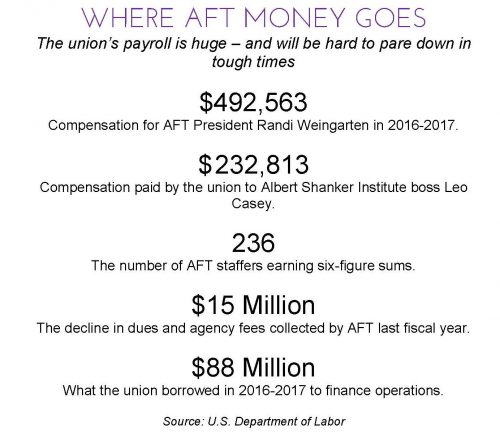 While AFT’s presence in Democrat-dominated states could help it stem rank-and-file losses, the reality is that it will likely lose at least 25 percent of its membership. This means a likely loss of $44 million (based on 2016-2017’s dues collections), and less revenue that it can use for influence-buying, political campaign activities, and lobbying. Not even AFT’s stalled strategy of expanding its presence into nursing and healthcare would have offset those losses,  especially since the Supreme Court ruling will also apply to public employees working at hospitals and health centers.

Those possible revenue and influence losses is one reason why AFT, along with other NEA and other public-sector unions, spent so furiously last year to support Hillary Clinton’s presidential campaign. If she had one, it was likely that either she would get to appoint a Supreme Court justice more-amenable to their cause, or, given congressional Republican opposition to Obama’s efforts to select a replacement for Antonin Scalia, would have kept the court split equally between conservative and more-progressive justices.

But with Trump in the White House and his appointee to the high court, Neil Gorsuch, confirmed and in the job for life, AFT and its affiliates now needs a new strategy for actually attracting members. This will be difficult.

Because AFT hasn’t had to actually win bodies since the 1960s, it lacks the strong organizing infrastructure that has made SEIU a major force in both the public and private sectors. The fact that the union has seen a 15 percent year-to-year decline in associate members (who are members of the national union) means that there is also little appetite for its presence, especially since, unlike state and local affiliates, it doesn’t have the means to help associate members out when they have workplace disputes.

While the state affiliates are strong in lobbying legislatures, they, along with AFT National, play little role in addressing the day-to-day concerns of classroom teachers; that’s what locals such as UTLA, Chicago Teachers Union, and United Federation of Teachers in New York City do. That the big locals also tend to be major players at the state levels, dominate the operations of the affiliates, and, in the case, of UFT, virtually controls the virtually-insolvent state affiliate, means that they have little need for either the state operations or national. Even without a Supreme Court ruling, you can expect the local affiliates to develop new structures that bypass AFT and allow them to try new approaches to education policymaking and organizing.

Reformers can’t exactly celebrate, either. A dirty secret of centrist Democrat and civil rights-oriented reformers is that they are as dependent as AFT on compulsory dues. This is because AFT and other public sector unions are the biggest financiers of the Democratic National Committee operations (as well as those of state parties), and also give plenty to reform-minded groups for their activities outside of education. Center for American Progress, Leadership Council on Civil and Human Rights, and UNIDOS are among the reform-minded outfits who will also take a hit if the Janus ruling goes against AFT and its fellow public-sector unions.

You can imagine Weingarten and her staffers shudder at the prospect of a future without compulsory dues. What they will do to preserve traditionalist influence (and keep their jobs) will be fascinating to watch.

Dropout Nation will provide additional analysis of the AFT’s financial filing later this week. You can check out the data yourself by checking out the HTML and PDF versions of the AFT’s latest financial report, or by visiting the Department of Labor’s Web site. Also check out Dropout Nation‘s Teachers Union Money Report, for this and previous reports on AFT and NEA spending.