The American Federation of Teachers just filed its 2016-2017 financial disclosure to the U.S. Department of Labor. Once again, it has spent big on preserving its influence over education policymaking. Whether or not the spending will help in the Trump era — or if it will have the money down the road — is a different question.

The nation’s second-largest teachers’ union spent $44.1 million in 2016-2017 on political lobbying activities and contributions to what should be like-minded groups. This is a 29.6 percent increase over the same period a year ago. This, by the way, doesn’t include politically-driven spending that can often find its way under so-called “representational activities”.

As you would expect, AFT gave big to the nonprofits controlled by Hillary and Bill Clinton — including their eponymous foundation and the now-shuttered Clinton Global Initiative — collected $400,000 from the union in 2016-2017; this includes $250,000 directly to the Bill, Hillary & Chelsea Clinton Foundation and $150,000 to the Global Initiative, which was shut down during the former Secretary of State’s unsuccessful presidential bid. Altogether, AFT gave $2.2 million to the Clinton-controlled groups over the past five years.

As Dropout Nation detailed over the last two years, the AFT worked assiduously to win over the Clinton machine in order to assure that it had influence over federal education policy if she won the White House. Besides the donations to the Clinton foundations as well as direct campaign spending, AFT had key supporters (including Democratic National Committee member Hartina Flournoy, a former union apparatchik, as well as Clinton campaign education adviser Ann O’Leary ) positioned to support its efforts.

As part of its effort to buy influence with the Clintons, AFT spent $10,000 with now-former acting DNC Chair Donna Brazile’s eponymous firm, a 90 percent decline over levels in 2015-2016. Oddly enough, it gave no money to Democrats for Public Education, the astroturf group that was attempting to replicate the efforts of the reform-oriented Democrats for Education Reform. Meanwhile AFT gave $175,000 to Center for American Progress, the ostensibly reform-oriented outfit founded by former Clinton Administration honcho (and Hillary’s campaign chairman), John Podesta; his communications with Weingarten (as well as with other key players) were leaked last year by Wikileaks.

Meanwhile AFT spent big on political campaigns on the national level. It poured $2.5 million into its Solidarity 527; those dollars, along with the $10.3 million spent by its main political action committee, worked hard to support Hillary and other unsuccessful Democrat candidates. AFT Solidarity, in particular, spent $843,614 against Florida U.S. Sen. Marco Rubio on behalf of Democrat rival Patrick Murphy, and spent another $328,590 against Ohio Sen. Rob Portman on behalf of former Gov. Ted Strickland, who co-chairs Democrats for Public Education on the union’s behalf.

AFT also gave $190,000 to Immigrant Voters Win, a PAC that was part of the Families Fight Back campaign organized by supporters of expansive immigration reform. The union also gave $345,000 to the Democrat-supporting House Majority PAC and poured $110,000 into the America Votes super-PAC. 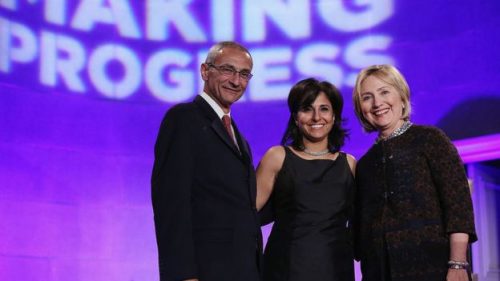 AFT bet big on Hillary Clinton (right with John Podesta and Neera Tanden of Center for American Progress) — and lost even bigger.

None of the AFT’s spending helped either its cause, or that of Hillary and her fellow Democrats. The election of Donald Trump to the White House not only endangers the futures of poor and minority children, it also assures that neither AFT nor rival school reformers (including centrist Democrat s who supported Clinton), will have a voice in the executive branch. Trump’s appointment of school choice activist Elizabeth Prince (Betsy) DeVos hasn’t done much for conservative reformers and hardcore school choice activists. But it also denies AFT a role in policymaking at L’Enfant Plaza.

Matters may get even worse next year, thanks to the March’s confirmation of Neil Gorsuch to the U.S. Supreme Court. If the federal high court likely to strike down compulsory dues with a ruling in Janus v. AFSCME, which is likely based on Justice Samuel Alito’s majority opinion three years ago in Harris v. Quinn, the AFT could lose at least 25 percent of its rank-and-file, leading to a major hit to its coffers as well as its ability to wield influence. Questions about Gorsuch’s conflict of interest on this matter (including giving a speech last week to a group that is involved in the lawsuit) may end up forcing him to recuse. But if it doesn’t, AFT, along with NEA, face a bleak political and financial future.

But until that ruling happens (if it does), AFT is spending big. Center for Popular Democracy and its action fund, which has done the union’s business by publishing reports aimed at stopping the expansion of public charter schools, collected $210,000 from the union in 2016-2017, about a third less than it received in the previous year. The fact that AFT President Rhonda (Randi) Weingarten no longer sits on its board is likely a factor in the lower levels of support.

Another big group of recipients is the NAACP and several of its affiliates. The old-school civil rights group itself received $90,000 from the union in 2016-2017, while chapters in Florida, New York and North Carolina collected another $65,000. Altogether, AFT financed NAACP to the tune of $155,000; of course, this doesn’t include the help NAACP receives from the union through payroll deductions from union dues that go towards paying membership fees. 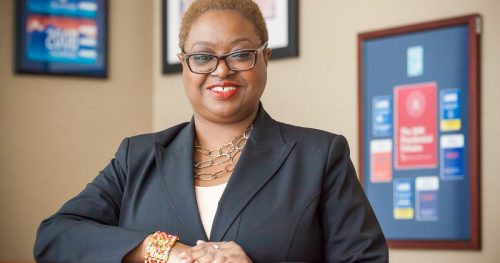 Leah Daughtry now gets more money from the union than either Jesse Jackson or Al Sharpton.

AFT’s has gotten plenty for its chicken wing money. NAACP has pushed hard to halt the expansion of charter schools, presenting its arguments at events such as the annual education policy ‘braintrust’ hosted by another AFT beneficiary, the Congressional Black Caucus Foundation.  NAACP’s message is incoherent, often incorrect, and on education policy matters, irrelevant. But thanks to school reformers, who haven’t yet figured out that the outfit can be ignored, NAACP’s effort has gotten national attention, for which AFT is most-grateful.

AFT gave $60,000 to Democracy Alliance, the secretive progressive campaign collaborative to which it (along with National Education Association) belongs. That is unchanged from 2015-2016. Receiving even more money from the union is State Innovation Exchange, which aims to duplicate for progressives and Democrat state legislators the kind of legislative writing work done by American Legislative Exchange Council on behalf of Republican and conservative counterparts. SIX picked up $115,000 from the union in 2016-2017, double what it received in the previous year.

As for co-opting progressive groups? AFT handed $25,000 to Netroots Nation in 2016-2017, unchanged from the previous year, while it gave another $10,000 to Demos, the progressive think tank. The union also gave $60,000 to Gamaliel Foundation, whose efforts to fund supposedly grassroots progressive outfits are also funded by the union’s reliable vassal, Schott Foundation for Public Education; that is also unchanged. Speaking of Schott: AFT gave it $85,000, an 13.3 percent increase from 2015-2016; apparently, its efforts on behalf of the union and other traditionalists at the expense of Black children is making the union happy.

AFT gave $200,000 to Sixteen Thirty Fund, the outfit run by former Clinton Administration player Eric Kessler’s Arabella Advisors in 2016-2017; the group has also collected cash from NEA. It also gave $20,000 to Center for Media and Democracy, the parent of PR Watch (a 28.6 percent decrease). It also gave $60,000 to the Kenwood Oakland Community Organization, which is also well-funded by the union’s Chicago affiliate; $50,000 to the Tides Foundation’s Advocacy Fund; and $10,000 to UnKoch My Campus, which is targeting the array of libertarian student and academic training outfits funded by natural resources billionaires (and Soros-like bogeymen for progressive groups) Charles and David Koch. United Students Against Sweatshops, which has helped AFT in its battle with Teach for America, picked up $10,000 in 2016-2017.   To reach youth, AFT also gave $31,500 to Community Labor United’s  Boston Youth Organizing Project. 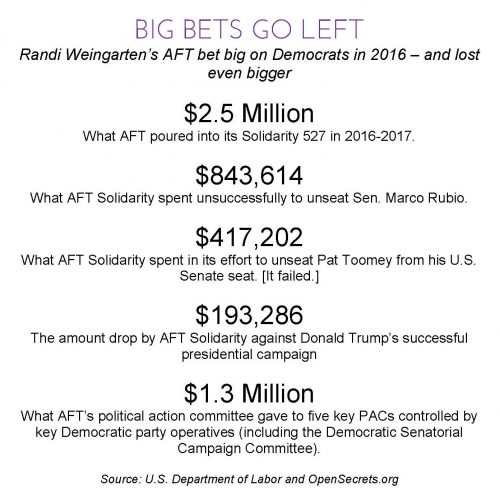 Meanwhile AFT attempted to further inroads with Black and other minority outfits.

The union gave $80,000 to the aforementioned Congressional Black Caucus Foundation, allowing it to rub shoulders with the likes of House Education and the Workforce Committee Ranking Democrat Bobby Scott (who has already collected a $5,000 donation from the union to his re-election campaign), as well as buy prominent speaking spots for its leaders (including Weingarten’s number two, Mary Cathryn Ricker, who spoke on her behalf) at CBC’s annual conference. The union gave another $25,000 to CBC’s Political Education and Leadership Institute, giving it even more access to future Black leaders. It also gave $35,000 to the Congressional Hispanic Caucus Institute as a way to win over Latino congressional leaders.

AFT also gave $10,000 to Rev. Jesse Jackson’s Rainbow PUSH Coalition, $5,000 to Rev. Al Sharpton’s National Action Network, $10,000 to the National Coalition on Black Civic Participation, $12,500 to National Black Caucus of State Legislators, $15,000 to National Association of Black Journalists, $15,000 to Higher Heights Leadership Fund (which is tied to Women’s March organizer Tamika Mallory) and $25,000 to National Alliance of Black School Educators. The biggest single recipient of AFT’s largesse not named Schott: Rev. Leah Daughtry, who presided over last year’s Democratic National Convention; she collected $165,000 from the union in 2016-2017, getting a lot of teachers’ money.

At the same time, AFT gave to a variety of Latino organizations. This included $15,000 to UNIDOS, the former National Council of La Raza that changed its name earlier this year; $7,500 to the school reform-oriented MALDEF; $10,000 to National Hispanic Caucus of State Legislators; $5,000 to National Board of Hispanic Caucus Chairs; $10,000 to U.S. Hispanic Leadership Institute; $16,667 to Hispanic Federation; $5,000 to Hispanic Heritage Foundation; $5,000 to the foundation named after labor leader Miguel Contreras, and $6,500 to Hispanic Association of Colleges and Universities. To build support among immigrant communities now endangered by the Trump regime, AFT has given more money to outfits working on their behalf. This includes $5,000 each to National Immigration Forum, National Immigration Law Center, and Black Alliance for Just Immigration.

AFT continues its efforts to co-opt the Atlantic Monthly. It gave $1.2 million* to the magazine in 2016-2017, double the previous year.  You have to wonder if Weingarten and her mandarins are kicking themselves for not offering to buy a stake in the Atlantic, which will soon be controlled by Laurene Powell Jobs’ reform-minded Emerson Collective, which has become a landing spot for U.S. Secretary of Education Arne Duncan and his former honcho on civil rights enforcement, Russlyn Ali.

As for the usual suspects? AFT gave $250,000 in 2016-2017 to Economic Policy Institute, whose policy solutions almost always resemble those of the union; that is unchanged from the previous year. The union also gave $25,000 to the American Prospect, which garnered notice back in August when it ran an interview of now-former Trump aide Steve Bannon by Robert Kuttner (who also cofounded Economic Policy); that is two-thirds less than what the union gave it a year ago. AFT also gave $75,000 through the University of Colorado Foundation to Kevin Welner’s National Education Policy Center, a 67 percent increase over 2015-2016; poured $10,000 to Committee for Education Funding (a 43 percent decrease over 2015-2016); and gave $50,000 to Alliance for Quality Education (unchanged from last year). As a reminder of the AFT’s unwillingness to support efforts to elevate the teaching profession it supposedly defends, the union gave $71,410 to Council for the Accreditation of Educator Preparation, a key player in vetting the nation’s university schools of education.

*Dropout Nation originally reported that AFT gave the Atlantic Monthly $900,000 in 2016-2017. But thanks to a reader, another spend with the magazine increases that number to $1.2 million.