On Friday, Black and Brown children in St. Louis learned, thanks to Circuit Court Judge Timothy Wilson, that a police officer can get away with murder and planting evidence even if he is caught and admits to doing both. More importantly, they learned that their own lives, and that of their parents, don’t matter at all.

That day, they were told about the other murders of young Black men and others by rogue cops that have happened in America. Including the 2014 slaying of Michael Brown in Ferguson by now-former police officer Darren Wilson, for which justice will never come. They learned that justice doesn’t happen for people like them.

Then during the weekend, they saw their parents and other caring adults (including an elderly woman) arrested, tear-gassed, and assaulted by cops because of their protests against the verdict, which allowed former police officer Jason Stockley to get away with his 2011 murder of Anthony Lamar Smith.

They heard cops say “Whose streets? Our streets” as they arrested citizens who pay their salaries. They listened to acting Police Chief Lawrence O’Toole declare with pride that “Police owned tonight”. They learned that Mike Faulk of the Post-Dispatch was arrested, tear-gassed, with a foot on his head, because he did his job. 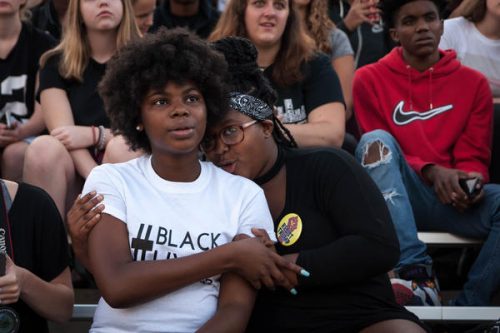 For Black children at Kirkwood High and other schools in the St. Louis area, protests aren’t just for the murder of young Black men by cops on city streets. [Photo courtesy of St. Louis Public Radio.]

They learned that as far as their local and state governments are concerned, their constitutional rights to free speech, assembly, and protest are meaningless. Because they are Black and Brown.

They found out that the protection of rogue policing is more-important than the lives of the people who are supposed to protected and served by law enforcement. Again, because they are Black and Brown.

They now realize that they must stand up and advocate as earlier generations have to ensure that the promises of liberty and freedom granted by the Founding Fathers are continuously extended to them and their kin. These lessons, by the way, are being learned by Black and other minority children elsewhere in America.

Which is why we must be gladdened by the news yesterday that teens at three local high schools — Kirkwood, Webster Groves and University City — walked out of their schools to protest the Stockley verdict.

But they were also protesting because of what has long been happening in the traditional districts they attend. Facts that can be seen in the most-recent statistics submitted by districts in the St. Louis area to the U.S. Department of Education. 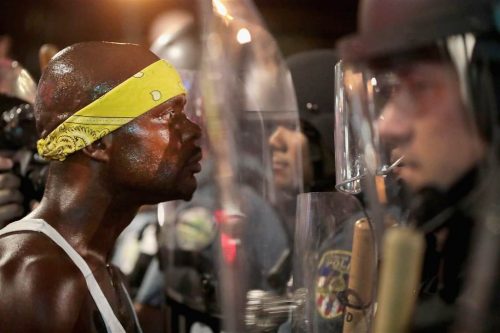 As reformers, we must be as fierce for children in St. Louis as the men and women who have taken on rogue policing this week.

There’s the fact that in 2011-2012, the most-recent year available, the St. Louis District meted out one or more out-of-school suspensions to 31.9 percent of Black children under its care. [Your editor says most-recent because St. Louis never submitted its 2013-2014 Office for Civil Rights data to the federal government.] This rate is higher than the 28.3 percent of all children suspended district-wide, and the atrocious 15.1 percent of their White peers. Even worse, seven Black children were referred to law enforcement (and thus, put on the path to juvenile justice systems) by the district, a punitive step that wasn’t done to children from other backgrounds.

Black children in St. Louis are less-likely to be provided the college-preparatory courses they need for lifelong success.

What the St. Louis district is doing to children is unacceptable and immoral. But it isn’t the only one committing educational abuse and condemning Black children to the school-to-prison pipeline. 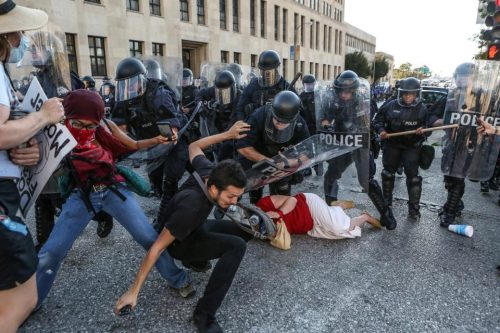 Meanwhile the Webster Groves district meted out-of-school suspensions to 7.2 percent of Black students. That’s three times higher than the 2.5 percent average for the district overall, and the 1.3 percent suspension rate for White students. -[The district arrested or had referred to juvenile court equal numbers of Black and White kids that year. Twelve altogether.]  A mere 6.8 percent of Black high school students (23 Black children) took calculus and other advanced math courses, a rate far lower than the 20.5 percent rate district-wide and the rate of 25 percent for White high schoolers. Only 5.6 percent of Black high schoolers (19 teenagers) took AP courses, three times lower than the district-wide rate of 17.9 percent and the rate of 21.6 percent for White high school students.

These numbers aren’t shocking. As Dropout Nation reported just after the Ferguson protests three years ago, the Ferguson-Florissant district is also notorious for shortchanging Black children of high-quality education, overusing harsh traditional forms of school discipline, and turning schools into police zones. This includes arresting or referring to juvenile court two percent of its students — 268 children — in 2011-2012, as well as meting out-of-school suspensions to 13.3 percent of all students (including 15 percent of Black children) in the district.

Another awful district is the one in Normandy, whose academic malpractice has essentially made it something other than an educational going concern, meted out-of-school suspensions to 28.6 percent of children (including 28.9 percent of Black students) left in its care in 2011-2012. Just 12 high school students, all but two of them Black, took AP courses that year (that’s eight-tenths of one percent of the district’s high schoolers); another 52 students (including 46 Black children) took calculus, trigonometry and other advanced math that year, which means only 3.5 percent took those courses.

The good news, at least for some Black children and others, is that there are some high-quality charter schools from which they can flee the worst traditional public education in the district offers. But with only 52 open in the entire state, there aren’t enough for children to flee. Expanding school choice should be on the list for Missouri’s state leaders to do on the education front. This doesn’t just include adding charters or even launching a voucher program. Ending the gatekeeping of high-quality education within districts, which starts with teachers and guidance counselors keeping poor and minority children out of gifted-and-talented programs, would go a long way to increase the learning they need and deserve. Reformers nationally can support efforts in St. Louis and other communities to make these opportunities a reality.

Even with a massive expansion of high-quality choice, the need to address the overuses of harsh school discipline would remain. That is a problem. What happens in our schools ends up in our streets. When districts overuse harsh school discipline, they teach law enforcement outside schools that poor and minority children are only criminals. The lawlessness of police departments in the St. Louis area — and the evil they have shown toward the black people who live their and pay their wages — is mirrored by the unwillingness of those working within its schools to provide all kids with high-quality education. With the Trump Administration all but abandoning the previous administration’s efforts to end overuse of harsh discipline, reformers in St. Louis are teaming up with Black Lives Matter activists to push for better alternatives. Reformers in the rest of the nation should do the same — and even give allies in St. Louis a helping hand.

Our children in St. Louis deserve better lessons than the ones taught by courts and cops over the past few days. They also deserve high-quality education and to be able to go to school without worrying targeted as miscreants in the places that are their second homes.

Do Acts of Life-Giving Kindness