As Dropout Nation readers know by now, this publication has long taken the Old Line State’s political and educational leaders to task for continually and deliberately deceiving everyone about its educational malpractice. This has including catching them excluding children with Limited English Proficiency and those condemned to special education ghettos from the National Assessment of Educational Progress in order to burnish the Old Line State’s Lake Woebegone reputation; as well as condemning the state legislature earlier this year for effectively eviscerating accountability in order to keep Gov. Larry Hogan and his appointees on the state board of education from actually holding districts and schools accountable for educational abuse.

But one of Maryland’s worst sins when it comes to educating children is one that is quite familiar in other parts of the nation: The rationing of college-preparatory learning, especially higher-level mathematics, that children need in order to succeed in higher education and in their adult lives. As an analysis of data reported by the state to the U.S. Department of Education reveals, the Land of Crab Cakes continuously shortchanges youth, especially those from poor and minority households.

Just 29.7 percent of Maryland’s high schoolers — a mere 75,126 children — took calculus, pre-calculus, trigonometry, geometry, statistics, and elementary analysis in 2013-2014, according to the Department of Education’s Office for Civil Rights data collection. Put simply, only three in 10 high schoolers in the Old Line State were provided with the advanced mathematics necessary for graduation from the traditional colleges, technical schools and apprenticeship programs that make up American higher education.

The good news, in theory, is that the numbers are higher than the 23.8 percent of high schoolers taking advanced mathematics in 2011-2012. But as you would expect, those numbers get even worse — and the inequities more stark — once you break the numbers down by demographics.

Black children in high schools are shortchanged the worst. Just 17.9 percent of them — that’s little more than one in eight students — took calculus and other advanced mathematics in 2013-2014, far below the statewide average, though higher than the 15.3 percent of Black high schoolers taking such coursework two years earlier.  Latinos fared little better, with just 21.7 percent (or one out of every five) taking advanced math. This is still better than the 17.4 percent who took advanced math in the same period two years earlier.

The problem extends beyond those classes to participation in Advanced Placement courses which have proven to be crucial in helping children, especially those from poor and minority households, prepare for success in higher education and beyond.

What about Algebra 1 course-taking at the middle school level, a key way of helping children get ready for the rigors of higher education down the road? As you already expect, Maryland’s public education systems are also falling behind on that front. 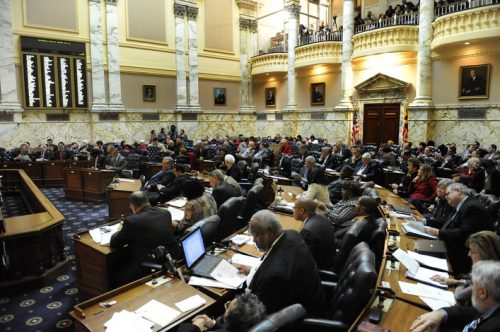 The Maryland General Assembly has continuously proven to be opposed to any kind of systemic reform on behalf of poor and minority children.

No wonder why a mere 13 percent of Black and 32 percent of Latino children in the state’s Class of 2017 met ACT’s benchmarks for college-readiness versus 64 percent of Asian and 58 percent of White peers.

What we have in Maryland is what Contributing Editor Michael Holzman calls an educational caste system, one that reflects the legacies of slavery, nativism, and Jim Crow segregation that is at the heart of America’s Original Sin. But it isn’t simply about the past. The Old Line State’s political and educational leaders are making decisions in real time that essentially deny opportunities for all children to gain the knowledge they need to succeed once they reach adulthood.

Nothing in the state’s proposed plan for meeting federal requirements under the Every Student Succeeds Act mentions how it will work to increase access to advanced math and AP courses, especially to Black and Latino children. The state is also silent on how it will require districts and other school operators to help children gain entry into those courses through high-quality curricula and teaching in the elementary grades or how it will end the gatekeeping of gifted-and-talented programs that often keep out poor and minority children.

That the Democrat-controlled state legislature has weakened the ability of the state education department to hold districts accountable for how they serve children, a move done as much to please the National Education Association’s Old Line State affiliate as to weaken the Republican Hogan’s control over education policy, now means that another generation of Black and Brown kids will end up on the path to poverty and prison. That the legislature’s Black caucus was complicit in this move (as were state board leaders through their unwillingness to call up Black reformers in the state who could have helped them out) is especially shameful.

Meanwhile the continued opposition to expanding public charter schools and other forms of choice, which could open up high-quality opportunities for Black and Latino children served poorly by traditional districts, remains the norm. While Maryland has made some progress on that front two years ago by passing a law creating the Broadening Options and Opportunities for Students (which now serves 1,900 children from poor households), the state has all but stifled the expansion of charters.

Another way to expand opportunity for poor-and-minority kids also remains untapped: Providing them with free access to AP courses. Particularly for poor families, the $15 cost for each AP course taken is a roadblock to the opportunities their children can access to move out of economic destitution. But neither the legislature nor Gov. Hogan have addressed this problem when they can clearly do so. Districts could also find ways to provide AP to the children in its care — as well as use advice from the Education Trust on how to support them (as well as teachers and school leaders) in achieving success. There is little interest in doing so.

It is high time for Maryland’s political and educational leaders to stop shortchanging children of the college-preparatory education they need for their success as well as that of the state as a whole. There’s no reason why this is happening — and it must stop.

Telling the Histories of Our Sampsons