Yesterday, National Education Association filed its 2015-2016 financial disclosure with the U.S. Department of Labor — and once again, the nation’s largest teachers’ union spent big to preserve its influence over American public education.

NEA spent $138 million on lobbying and contributions to supposedly likeminded organizations during its last fiscal year. That’s a 5.3 percent increase over influence-buying levels in 2014-2015. This, by the way, doesn’t include another $46.5 million in spending on so-called representational activities, which almost always tend to be political in nature; that’s a 16 percent increase over levels in the previous year.

One of union’s key spends was on its own Super-PAC, NEA Advocacy, which was a key player in the Democratic National Committee’s effort to retain the White House and regain control of the U.S. Senate. It poured $12.2 million into NEA Advocacy in 2015-2016, a 40 percent increase over the $8.7 million given to it during the previous fiscal year. As OpenSecrets notes in its most-recent analysis of the Super-PAC’s finances, NEA funneled most of that money in it to other Super-PACs and 527 committees. This included $300,000 to American Bridge 21st Century (another recipient of NEA funding), and $774,670 to Kentucky Family Values, which unsuccessfully fought to stop Republicans from winning control of the Bluegrass State’s legislature.

As you would also expect, NEA also poured money into Democracy Alliance, the ever-the secretive progressive outfit which has become a major player in national and Democratic Party politics. NEA Executive Director John Stocks chairs the organization’s board of directors. The union gave $1.6 million to the outfit, its Committee on States, and its State Engagement Fund in 2015-2016, a seven-fold increase over the previous fiscal year. Given how poorly Democrats performed this election cycle, you can conclude this was money not well spent.

Meanwhile NEA spent plenty on other outfits within the wider Democracy Alliance network. It poured $200,000 into David Brock’s Media Matters for America, ladled out $225,000 to Progress Now, put $187,654 into the Advancement Project (which has been a partner with NEA and AFT in opposing systemic reform), and handed out $25,000 to longtime beneficiary Netroots Nation. NEA also spent $627,543 with Catalist, LLC, the data-mining outfit for the Democratic National Committee that is a lynchpin in Democracy Alliance’s campaign efforts. Again, in light of Democratic Presidential Nominee Hillary Clinton’s defeat at the hands of Donald Trump this month, NEA may need to reconsider where it spends its cash.

The biggest recipient within the Democracy Alliance network is Center for Popular Democracy, whose board includes American Federation of Teachers President Rhonda (Randi) Weingarten. NEA gave the outfit and its political action fund $591,350 in 2015-2016, a 3.7 percent increase over the previous fiscal year. [AFT itself gave the outfit $373,000 during its last fiscal year.] That’s more money to help NEA and AFT in their effort to oppose the expansion of public charter schools and other forms of choice.

Meanwhile NEA continued to co-opt progressive and social justice groups in its effort to defend the policies and practices that finance its operations. For NEA, the dollar amounts to each group can often be small compared to its annual revenue. But for the recipient groups, many of which are always cash-strapped and dependent on the kindness of bigger players, the dollars often influence the direction of their advocacy. Why? Because philanthropic groups and unions such as NEA prefer to finance programmatic activities such as advocacy rather than subsidize the organization’s administrative and other back-office operations; often, programmatic staff will keep their jobs even as nonprofits lay off other staff. As a result, NEA can ensure that its vassals do its bidding.

The union doled out $140,000 to Center for Media and Democracy, the outfit behind PR Watch and ALEC Watch, the latter of which is likely favored by the union since it focuses on the conservative state policymaking outfit. It also gave $100,000 to the Progressive Inc, the parent of the news outlet that counts Jeff Bryant of Campaign for America’s Future (a longtime NEA dependent) and Julian Vasquez-Heilig among its contributors. That’s plenty enough for freelance fees to put into the pockets of Bryant, Vasquez-Heilig and their fellow-travelers. The union also handed another $50,000 to Independent Media Institute, the parent of progressive media outlet Alternet.

The union gave $148,800 to Change Corps, which provides training to progressive activists, provided $65,000 to the Tides Foundation’s Advocacy Fund, and handed off $35,000 to the Opportunity Institute. NEA also gave $75,000 to Convergence Center for Policy Resolution, and $25,000 to Center on Budget and Policy Priorities.

NEA even gave $125,000 to Center for American Progress — even though it is one of the foremost players in the school reform movement. It helps that the latter is key to the Democracy Alliance network of nonprofits and political action outfits. 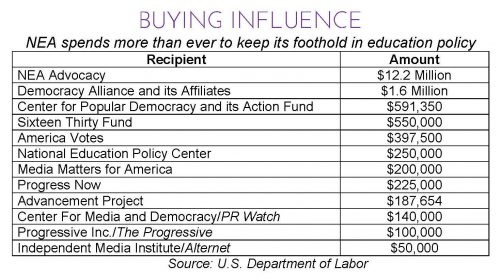 For the first time in two years, NEA didn’t give any money to Schott Foundation for Public Education and its political action fund. Given how little mileage the union got from working with the once-respectable advocate for transforming education for young black men, it’s probably for the best. Rev. Al Sharpton’s National Action Network, Jesse Jackson’s Rainbow/PUSH Coalition, and old-school civil rights group NAACP (which managed to garner publicity favorable to union with its resolution calling for a moratorium on the expansion of charters) also didn’t collect a check from NEA for the first time in quite a while.

Meanwhile NEA worked on co-opting other minority advocacy groups. It gave $65,000 to the Congressional Black Caucus Foundation, the philanthropic arm of the coalition of African-American members of Congress; put $94,000 into the Congressional Hispanic Caucus Institute, which serves the same role for Latino members; and gave $15,000 to MALDEF. The union also gave $20,000 to Institute for Asian Pacific American Leadership and Advancement, and put $5,000 into National Council on Educating Black Children. Building ties with gay, lesbian and transgender activist groups, NEA gave $50,000 to Human Rights Campaign, and $50,000 to Gay Lesbian and Straight Education Network.

It even managed to give $50,000 to Smithsonian Institution for the newly-opened National Museum of African-American History and Culture. That was a very smart thing to do, one that some reformers should have also done.

Meanwhile NEA is looking to build support among teachers and families for its agenda. It gave$12,460 to the National Network of State Teachers of the Year, allowing the union to take advantage of the popularity of teachers (and avoid the general disdain toward it and AFT). Another $36,700 was given to the National Teacher Hall of Fame, while $86,242 went to Institute for Education Leadership. Meanwhile NEA gave $150,000 to Parents Together Action, an outfit that is attempting to co-opt the Parent Power movement; while it put down $61,031 to Parent Teacher Home Visit Project.

As for the usual suspects: NEA gave $50,000 to FairTest (also known as National Center for Fair and Open Testing), the leading outfit in opposing the use of standardized tests, the data from which can be used in evaluating the teachers in NEA’s rank-and-file. It also gave $250,000 to the National Education Policy Center through the University of Colorado-Boulder’s foundation. It provided $398,000 to National Board for Professional Teaching Standards; poured $397,036 into Council for Accreditation of Educator Preparation, the group that represents the nation’s woeful university schools of education; put $395,120 into Barnett Berry’s Center for Teaching Quality; and handed off $275,000 to the Republican Main Street Partnership and its Main Street Advocacy Fund.

NEA gave $250,000 to Economic Policy Institute, while handing $100,000 to its other go-to research ally, Great Lakes Center for Education Research and Practice. The union also gave $114,000 to Learning First Alliance, and put $150,227 into Education Law Center.

As we say at Dropout Nation, there is nothing wrong with NEA leaders drawing six-figure sums. But the high salaries (and the corporate ways the NEA and the AFT engage in their defense of traditionalist policies and thinking) should be kept in mind any time Eskelsen Garcia and AFT counterpart Weingarten use class warfare rhetoric to oppose systemic reform of American public education.

Dropout Nation will provide additional analysis of the NEA’s financial filing later this week. You can check out the data yourself by checking out the HTML and PDF versions of the NEA’s latest financial report, or by visiting the Department of Labor’s Web site. Also check out Dropout Nation‘s Teachers Union Money Report, for this and previous reports on AFT and NEA spending.