The American Federation of Teachers just filed its 2014-2015 financial disclosure to the U.S. Department of Labor, and as you would expect, it spent big on preserving its declining influence over education policy. The nation’s second-largest teachers’ union spent $42 million on political lobbying activities and contributions to what should be like-minded groups; this, by the way, doesn’t include politically-driven spending that can often find its way under so-called “representational activities”. This is a 45 percent increase over influence-spending levels in 2013-2014.

As it did last year, AFT gave big to the charities controlled by Democratic presidential candidate Hillary Clinton and her husband, former President Bill Clinton. It handed over $250,000 to the Bill, Hillary, and Chelsea Clinton Foundation and another $250,000 to the Clinton Global Initiative, which is the other non-explicitly political wing of the Clinton family’s always-political efforts. Altogether, the two Clinton charities received $500,000 in 2014-2015, an 11 percent increase over the $450,000 given to them in the previous year; altogether, AFT has poured $1.2 million into Clinton-controlled outfits over the past three years.

As Dropout Nation has noted over the past year, AFT’s giving to the Clinton charities is part of the union’s goal of winning influence over federal education policy after seven years of being shut out by the Obama Administration and centrist Democrat reformers. The union has further burnished its already-extensive ties to Hillary and Bill. This includes endorsing the former U.S. Secretary of State’s run for the White House in spite of opposition from hardcore progressive traditionalists within the rank-and-file, as well as with AFT President Randi Weingarten’s appearance this past Sunday at a Clinton Global Initiative summit to announce $100 million in funding for an early childhood education initiative that will surely benefit the union’s other goal of forcibly unionizing preschool teachers. Expect the union to put even more money behind Hillary’s campaign and the Clinton family’s charities over the next year.

But AFT’s efforts to wrestle control over education policy from centrist Democrats isn’t limited to backing the nominee. The union has poured $99,000 into Democrats for Public Education, the AstroTurf group it formed last year to oppose the rival (and more-prominent) Democrats for Education Reform; this doesn’t include another $12,500 that the union has lent to the group that appears on its accounts payable list. Expect the group’s co-chair, longtime Clinton ally and Democratic Party powerhouse Donna Brazile, to do plenty of lifting on behalf of AFT within the party (and during her appearances on CNN); Brazile’s firm, by the way, collected $100,000 from the union in 2014-2015. Also, expect AFT and Democrats for Public Education to put lots of money and activism behind the group’s other co-chair, former Ohio Gov. Ted Strickland; after all, he is likely run for U.S. Senate against incumbent Rob Portman next year — and has a good chance of winning.

Meanwhile AFT is pouring even more money into progressive outfits it, along with NEA, has long it co-opted. The prime role these progressive groups will play for the union in getting activists within the Democratic Party to support its aims (and that of the NEA) on education policy will become even more important with the upcoming presidential election. This starts with Democracy Alliance, the ever-so-secretive outfit to which AFT (and NEA) belong. The union gave $60,000 to the outfit last year. As novelist Chuck Palahniuk would write, the first rule about membership in Democracy Alliance is that you don’t say you’re part of it. Another outfit getting AFT money is the State Innovation Exchange, which aims to duplicate for progressives and Democrat state legislators the kind of legislative writing work done by American Legislative Exchange Council on behalf of Republican and conservative counterparts. The union gave $60,000 to SIX last year. Political action committee America Bridge 21st Century received $100,000 from AFT last year.

Center for Popular Democracy, on whose board Weingarten sits, picked up $60,000 from AFT while its action fund received another $100,000; the group has done more than its duty for the union (and its goal of opposing school choice) by teaming up with In The Public Interest to publish a series of reports demanding “accountability” for public charter schools. In The Public Interest, by the way, picked up $50,000 from AFT for doing the union’s bidding. AFT gave $25,000 to Netroots Nation, another longstanding beneficiary of its largesse. It gave $27,000 to The Nation, which has become a prime venue for pieces that favor the AFT’s views on systemic reform; and handed $10,000 to Dissent, the progressive magazine that occasionally makes The Nation seem downright conservative.

Another key group AFT is funding is the Institute for Women’s Policy Research, which has been worked actively on pay equity and other issues. This includes its Early Care and Education project, which has issued a steady stream of reports calling for preschool teachers to be better-paid; this dovetails nicely with AFT’s twin goals of regaining dominance in education policy and becoming the dominant union in the early childhood education space. The union gave $47,500 to IWPR in 2014-2015. AFT also poured $60,000 into Jobs with Justice and its education fund; gave $20,000 to Policy Matters Ohio; and handed out $50,000 to Public Policy and Education Fund of New York. United Students Against Sweatshops, which has actively opposed reform outfits such as Students For Education Reform and Teach for America on behalf of AFT, picked up $50,000 from the union last year. Americans United for Change picked up $90,000 from AFT in 2014-2015.

But AFT isn’t just concentrating its money into progressive groups. It is also spending lots of money on election data it can use to help itself and its progressive allies gain traction. That need became especially clear during last year’s Election Day debacle. AFT spent $220,000 with the Atlas Project, the outfit which provides election data to various progressive groups. The union is also paying lots of money to get individual progressives on its side. The union paid $176,568 to pastor and onetime Democratic National Committee operative Rev. Leah Daughtry’s outfit, On These Things, and also put $15,450 into Dissent contributor Jo-Ann Mort’s Change Communications.

[By the way: AFT also paid $25,000 to Alexander Russo, the writer behind This Week in Education, for The Grade, the Washington Monthly education blog he launched earlier this year. Russo confirmed this in a response to Dropout Nation earlier today.] 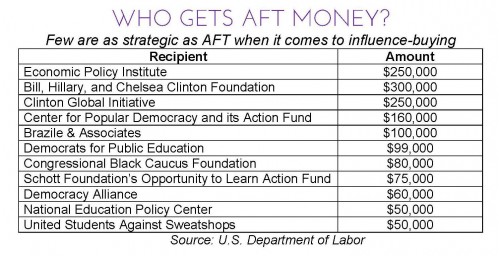 The AFT is also pouring money into black and other minority outfits. The union poured $75,000 into the Schott Foundation for Public Education’s Opportunity to Learn Action Fund; this is less than the $180,000 it gave to Schott and its unit last year. Apparently, all the work Schott has done to help the AFT unsuccessfully beat back systemic reform (including a letter the outfit’s president, John Jackson, co-wrote with Pedro Noguera and Judith Browne Dianis of the Advancement Project) didn’t get the bang the union wanted. AFT also handed over $80,000 to the Congressional Black Caucus Foundation, a move that gave the union prime visibility at its annual event (including a speaking spot for Weingarten) before key congressional leaders such as House Education and the Workforce Committee Ranking Member Bobby Scott. The union handed over $42,000 to the Congressional Hispanic Caucus Institute, another key arm for congressional leaders weighing the unlikely reauthorization of the No Child Left Behind Act.

Jesse Jackson‘s Rainbow PUSH Coalition picked up a mere $10,000 from AFT in 2014-2015, 60 percent less than the $25,000 the old-school civil rights leader’s outfit received in the previous year. Apparently AFT decided after its unsuccessful effort to oust Chicago Mayor Rahm Emanuel from office earlier this year that paying Jackson more money was a waste of resources. Al Sharpton’s National Action Network still got $100,000 (or four times more than it received last year) despite the activist-and-television commentator’s support for charter schools; this likely has to do with supporting Sharpton’s work with the union’s Big Apple local, United Federation of Teachers, on stopping police brutality. The union gave television commentator Tavis Smiley’s eponymous firm $150,000 for “member-related professional services”. AFT also gave $25,100 to National Alliance of Black School Educators, $5,000 to National Black Caucus of State Legislators, $5,000 to National Coalition on Black Civic Participation, $5,000 to Coalition of Black Trade Unionists, $5,000 to National Council on Educating Black Children, and $5,000 to the National Bar Association’s civil rights law section.

AFT also handed over $65,000 to the National Association for the Advancement of Colored People, whose legal defense fund has become one of the most-prominent opponents of the union’s efforts to eviscerate No Child’s strong accountability measures; that’s 44 percent more than the union gave to the group last year. [AFT also gave the old-school civil rights group’s Tar Heel State unit $100,000 for its efforts.] The union also gave $15,000 to National Council of La Raza, as well as $100,000 to Center for American Progress and its action fund. The League of United Latin American Citizens, which has been a prominent supporter of reform before signing up on a compact opposing accountability put together by AFT and the National Education Association, picked up $15,000 from the union for its national convention. AFT also gave $5,000 to National Board of Hispanic Caucus Chairs, $5,000 to National Hispanic Caucus of State Legislators, and $5,000 to U.S. Hispanic Leadership Institute.

As for the usual suspects? The Economic Policy Institute picked up $300,000 from AFT in 2014-2015, $25,000 more than it received in the previous year, while the Learning First Alliance received $53,964, the same as in 2013-2014. The American Prospect, which was started by Economic Policy Institute co-founder Robert Kuttner, returns to the AFT fold, picking up $50,000 from the union. Through the University of Colorado Foundation, the AFT dropped another $50,000 into the National Education Policy Center, the group run by Kevin Welner that has been a reliable flack for AFT and NEA positions against systemic reform. And the Council for the Accreditation of Educator Preparation, a key player in vetting the nation’s university schools of education, received another $69,330 from AFT last year. 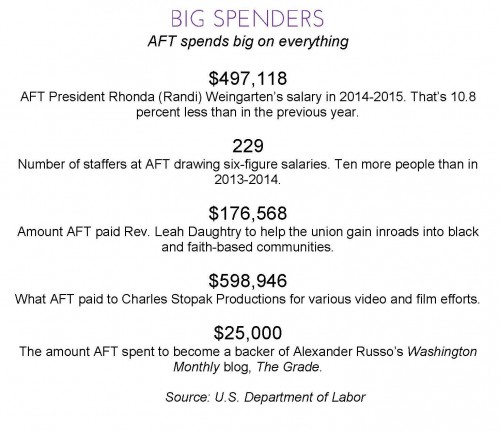 Let’s also not forget the other AFT front groups: Alliance for Quality Education, which has carried plenty of water for AFT and its affiliates in New York, received $25,000 from the union in 2014-2015; that’s 50 percent less than the $50,000 the group received from AFT in the previous year. Common Good Ohio, an outfit which is working with the AFT’s Cleveland local on beating back Mayor Frank Jackson’s reform efforts, got $25,000 or half of what the union handed to it in 2013-2014. ACTION United, which has helped AFT in its partially-successful effort to halt systemic reform in Philadelphia, received $20,000 in 2014-2015, less than half the largesse received in the previous period. Youth United for Change, the other key group for AFT in the City of Brotherly Love, got $30,000, or half its pull in 2013-2014.

So how much did Randi and her fellow leaders make? Good question. The AFT president pulled down $497,118 in 2014-2015, 10.8 percent less than in the previous year, while Secretary-Treasurer Loretta Johnson was paid $356,292, or slightly more than in the previous period. Mary Cathryn Ricker, the former Saint Paul Federation of Teachers boss who succeeded Francine Lawrence as executive vice president, was paid $295,275, more than the zero dollars she earned as an AFT vice president in 2013-2014. Altogether, the AFT’s big three pulled down $1.1 million last fiscal year, 15 percent less than in the previous period.

Dropout Nation will provide additional analysis of the AFT’s financial filing later this week. You can check out the data yourself by checking out the HTML and PDF versions of the AFT’s latest financial report, or by visiting the Department of Labor’s Web site. Also check out Dropout Nation‘s new collection, Teachers Union Money Report, for this and previous reports on AFT and NEA spending.

Boehner Steps Down, Saves No Child