Getting Paid for NEA/AFT Play

RiShawn Biddle
1 Comment on Getting Paid for NEA/AFT Play

Your editor didn’t give much consideration to last week’s op-ed by Schott Foundation for Public Education President John Jackson, Pedro Noguera of Economic Policy Institute’s Broader Bolder Approach, and Judith Browne Dianis of the Advancement Fund criticizing civil rights groups such as UNCF and NAACP for supporting the focus on strong accountability as exemplified by the No Child Left Behind Act and other systemic reform efforts. Besides the fact that other reformers have already taken aim at the arguments made in the claptrap, your editor took apart similar arguments made last year in a so-called alternative accountability push to which Advancement Fund and Schott are signatories.

But your editor did think it was important to remind you that Schott, Noguera, and Browne Dianis have plenty of reasons for taking aim at civil rights groups and reformers other than any professed concern for the futures of children. Those reasons start with the coffers of the National Education Association and the American Federation of Teachers, who are looking to do anything they can to push a reauthorization of No Child that eviscerates strong accountability as well as the use of standardized test growth data that can be used in hiring and firing of teachers often forced to pay into their respective coffers.

As you already know, the chances of No Child being reauthorized this year are almost slim to none. Sure, Senate Health Education Labor and Pensions Committee Chairman Lamar Alexander is attempting to bring his version of the law up for full consideration by the federal upper house. But opposition from conservative true-believers, who have all but kiboshed a similar measure from Alexander’s House counterpart, John Kline, all but assure that the Tennessee Republican’s plan is effectively dead on arrival.

But as Dropout Nation noted two years ago, there will still be plenty of gamesmanship among both reformers and traditionalists over No Child reauthorization, all driven by the desire to advance their policy and advocacy goals. Particularly for NEA and AFT, which have found themselves beaten back by centrist Democrat reformers who have been the leading players on federal education policy during the Obama Administration’s tenure, lining up support for their efforts beyond their declining memberships and hardcore progressives is critical to any future success in stopping the advance of systemic reform.

This is why AFT is working hard to leverage its ties to advisers of likely Democratic presidential nominee Hillary Clinton while NEA is demanding presidential candidates to essentially declare that they will do the union’s bidding. It is also why NEA, whose political spending (including contributions to nonprofit groups) has garnered few tangible results, is demanding that its vassals do its bidding under the guise of social justice.

So far, the Big Two haven’t succeeded in winning over civil rights groups, many of whom have been among the strongest backers of No Child since its passage 13 years ago. This became clear last month when the NAACP and its legal defense fund came out on the pages of Education Week in favor of the strong accountability measures that No Child represents (even as it considered the law’s sanctions to be “deeply flawed”). Considering that the old-school civil rights group has long been better-known for defending traditionalist thinking — including opposing the expansion of charter schools and other forms of school choice — and that it has been a prime recipient of NEA and AFT largesse, the reversal was definitely not welcomed in traditionalist circles.

But NEA and AFT can still count on a few allies who consider themselves civil rights groups — even as they defend policies and practices backed by the Big Two that harm the futures of children black and brown. One of those outfits is Schott Foundation, which helped advance systemic reform more than a decade ago with its series of reports on low graduation rates for young black men. Certainly the organization’s work on graduation rates and how the nation’s traditional districts fail black and Latino children remain laudable. But since being taken over by Jackson eight years ago, Schott and its Opportunity to Learn initiative has become a key ally of NEA and AFT in their efforts against those very kids.

Last November, Jackson sent shock waves among civil rights-based reformers (already worried about the possibility of a No Child law stripped of any benefit for kids) when he touted the alternative accountability compact sponsored by NEA and AFT; two months later, civil rights groups led by the Education Trust responded strongly with their own call for bolstering No Child accountability measures. Yesterday, Schott reaffirmed its role on behalf of the Big Two by sending out an e-mail touting an event AFT is holding in October in New Orleans. [Advancement Project is one of the organizations prominently cited as a key player at that event.] 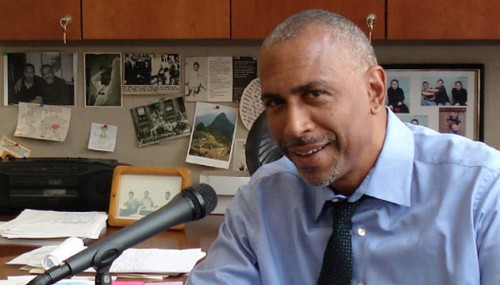 Such allegiance to NEA and AFT thinking has paid off well for Schott Foundation. As Dropout Nation has previously reported, the outfit and its Opportunity to Learn Action Fund collected $480,000 from NEA and AFT in 2013-2014. If Schott’s revenue of $2.3 million in 2012-2013 (the latest year available) remained constant, NEA and AFT funding would account for 16.6 percent of the its funding. Given that Schott has ran a deficit of $4.3 million over the previous two fiscal years — and has drawn down its assets by 31 percent over that period (from $11.3 million to $7.8 million) — it is especially dependent on Big Two cash.

In turn, Schott has poured money into the Big Two’s key vassals. In 2012-2013, Schott gave a $35,000 grant to Economic Policy Institute, a longtime NEA and AFT dependent; $115,000 to Institute for America’s Future (whose political action wing is also financed by the two unions); $10,000 to the Progressive States Network (which gets plenty of teachers’ union cash); and a $10,000 grant to NEA beneficiary FairTest, which has long fought against No Child accountability and the standardized tests that are critical to holding states, school operators, teachers, and school leaders to account for improving student achievement of poor and minority children.

But Schott isn’t the only outfit with strong incentive, financial and otherwise, to do NEA’s and AFT’s bidding. There’s Noguera, the New York University professor who waffles between occasionally supporting systemic reform efforts and giving comfort to his traditionalist allies (especially when they call him out for being an apostate to their cause). Very little of his professed concern for building brighter futures for young black men ever shines through in his work. As co-chair of Economic Policy Institute’s Broader Bolder Approach effort, he must also be concerned about keeping NEA and AFT happy.

Economic Policy collected $1.2 million from the two unions between 2011-2012 and 2013-2014 alone, according to a Dropout Nation analysis of union spending. Based on the think tank’s 2012-2013 filing with the Internal Revenue Service, NEA and AFT contributions of $625,000 that year accounted for 11.2 percent of its revenue. Noguera surely must keep EPI’s fiscal concerns (and that of Broader Bolder) in mind whenever he puts pen to paper. After all, EPI’s efforts also bolster his profile in education policy and advocacy.

But what about Advancement Project? Certainly it collected $75,000 from NEA in 2013-2014. But that would be a rounding error in its $11.3 million in revenue (as of 2012-2013, the most-recent year available); there’s also the fact that one of its key players is Molly Munger, the daughter of the Berkshire Hathaway billionaire (and Warren Buffet’s longtime investing partner), so it isn’t exactly dependent on traditionalist largesse. In fact, Munger ran afoul of NEA’s and AFT’s affiliates in California three years ago when she tried to torpedo the eventually-successful tax increase contained in Prop. 30 in order to bolster support for a similar measure she backed.

The tie between Advancement Project and the Big Two lies with Browne Dianis, a former NAACP staffer who is the outfit’s top staffer inside the Beltway. She is vice chairman of FairTest, which is heavily dependent on teachers’ union funding. In 2013-2014, the organization collected $40,000 from NEA; as a result, the union accounted for 26 percent of its revenue of $154,332 (most of which went into the pockets of its executives, Monty Neill and Robert Schaeffer, even though they only work a total of 60 hours a week).

With FairTest having never shown a surplus within the last two years, Browne Dianis must also work with Neill and Schaeffer to keep the outfit afloat. That means NEA and AFT money — along with the strings their cash entail.

Certainly for Jackson, Noguera and Browne Dianis, doing the bidding of the Big Two is yielding significant benefits for their organizations as well as themselves. That it means pushing for a rollback of federal education policy that have helped black and brown children  as well as a return to the bad old days when states and districts were allowed to ignore their obligations to poor and minority children doesn’t factor into any of their thinking. But given that there are black school leaders and politicians who have been willing to oversee educational abuse and neglect of children who share their same skin color, Jackson, Noguera and Browne Dianis are keeping, well, bad company.

Featured photo: Under the leadership of John Jackson, the Schott Foundation has become a key supporter of NEA’s and AFT’s agenda.

Testing is Key to Civil Rights

The Power of Presence