You can never trust the recommendations from any group who has American Federation of Teachers President Randi Weingarten on its board, much less takes money from the nation’s second-largest teachers’ union. This is even more true when the group is recommending “accountability” for public charter schools, the bane of the AFT’s existence, especially when the mismanagement of its Big Apple local in managing a running such a school (which Weingarten helped launch during her tenure running the unit) is the source of its most-recent embarrassment.

These are just two of the many reasons why your editor has few good words for the so-called Charter School Accountability Agenda launched yesterday by Center for Popular Democracy and In the Public Interest (and even fewer for the shoddy poll it released). While a couple of the recommendations offered by the two groups offer have some merit, the entire exercise merely serves as a front for the AFT’s effort (and that of other traditionalists) to oppose the expansion of school choice and advancement of systemic reform our children need and deserve.

Certainly the charter school movement needs to be concerned about bad operators whose financial and academic malfeasance (along with mere incompetence in improving student achievement) can cast the entire sector and the school reform movement as whole in a bad light. This includes shutting down authorizers who are allowing failing charter operators and their schools to remain in business long after it is clear that they’re not making the grade. So on this front, Popular Democracy and In the Public Interest don’t have it absolutely wrong. The demand from the groups that charter school operators provide financial disclosure to families and taxpayers deserve serious consideration and support.

The problem is that the rest of their recommendations all have to do with serving the interest of their patron, AFT, to restrict the expansion of choice and deny high-quality schools to children, especially those from poor and minority households who need it most.

Popular Democracy’s and In the Public Interest’s demand that states require impact analysis on how the opening of new charters will affect traditional district schools is absurd. Essentially what the groups are arguing is that charters shouldn’t be allowed to open unless districts can keep their monopolies on education within their communities. As it is in most states, districts are in charge of deciding whether charters can open at all, which is akin to allowing McDonald’s to decide whether a Five Guys can open next door. But the problem goes beyond competition. By arguing against the expansion of charters and other forms of choice, Popular Democracy and In the Public Interest are essentially saying that families, especially those in the poorest communities they proclaim concern, shouldn’t be able to be lead decision-makers in education, especially on behalf of the kids they love.

This is especially important because many charters are operating in big-city distrricts where children are served by failure mills and dropout factories. As researchers such as Stanford’s Center for Research on Educational Outcomes, and Rand Corp., have determined in their studies, charters do better than traditional districts in improving student achievement as well as in helping kids graduate from high school and move on to higher education. This is borne out in data from the Knowledge is Power Program, whose schools serve mostly poor and minority children; 44 percent of its alumni have completed higher education, five times greater than the average completion rate for kids from low-income backgrounds. This isn’t to say that all charters are serving all children properly. But restrictions on their expansion won’t lead to higher-quality traditional district schools at all.

Then there’s Popular Democracy’s and In the Public Interest’s demand that states safeguard districts from losing per-pupil funding when charters open. It is also ridiculous. Why should any district be entitled to receive dollars for kids they are no longer serving? More importantly, by allowing districts to receive same levels of funding regardless of the number of kids they are serving, states would simply be aiding and abetting educational malpractice and neglect. If anything, the threat of losing the dollars can help spur failing districts to undertake much-needed overhauls. And if those districts cannot shape up, they deserve to lose kids and ultimately shut down.

The argument made by the two outfits is especially silly when you keep in mind that the districts whose revenue they are defending have spent decades subjecting poor and minority children to educational abuse and neglect. This includes districts such as Detroit, Philadelphia, Milwaukee, and Baltimore — operations in which AFT locals are the exclusive bargaining agents for teachers (most of whom were never around when the union was given that role) — whose failures have been chronicled by Dropout Nation since it first began publication. These districts are not only failing to provide kids with high-quality education, their inability to manage their financial affairs (even with plenty of additional funding) makes them questionable as going concerns. Even if charters no longer existed these districts would not do well financially or economically.

The silliest of the demands made by Popular Democracy and In the Public Interest? That charters should condemn as many kids to special ed ghettos as traditional districts. As Dropout Nation has noted over the past few years, the reason why charters tend to serve fewer numbers of kids in special ed is because they are less-likely to overlabel struggling students. This is important because in traditional districts, children condemned to special ed ghettos are often put there based on rather subjective diagnoses that can often mistaken real learning issues such a illiteracy for developmental delays, mental retardation, and other cognitive issues.

By focusing on those learning issues — and ditching the beliefs of so many adults in traditional districts that poor and minority kids, along with young white men, are destined to be special ed cases — charters are keeping kids from falling onto the path to dropping out into poverty and prison. All things considered, Popular Democracy and In the Public Interest should be applauding charters, not asking them to take on the failed practices that allow districts to ignore children they don’t think are deserving of high-quality education.

But none of this sophistry is shocking. As I mentioned at the beginning, Popular Democracy and In the Public Interest are AFT vassals. In the Public Interest, a unit of the Partnership for Working Families, collected $25,000 from the union in 2013-2104. Popular Democracy, which is staffed by ex-executives of Make the Road New York and whose board includes veterans of the now-defunct ACORN, is particularly tied to AFT’s hip. Not only did its Action Fund collect $60,000 in AFT largesse, Weingarten also serves on its board. These ties explain why AFT issued a press release yesterday lauding their claptrap. 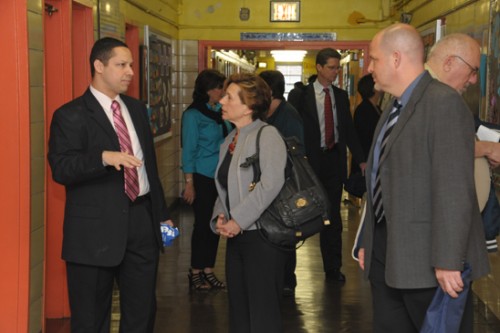 Considering how charters, including those run by outfits such as Green Dot (which serve Latino children) have demonstrably benefited children from poor, minority, and immigrant households as well as the communities in which they live, both groups are betraying their proclaimed concern for both. But in light of their co-opting by the union, no one can possibly expect either to deal honestly on any issues related to systemic reform. Calling Popular Democracy and In the Public Interest progressive groups is an insult to those in school reform who are truly progressive as well as to Webster’s dictionary.

Just last week, its New York City local, United Federation of Teachers, partially shut down its charter school after a decade of shoddy performance. This is a school, by the way, that Randi Weingarten (who led the initiative while serving as head of the AFT unit) harrumphed would prove that the failed practices it defends can work. By the time UFT announced that the charter would stop serving kids in elementary- and middle-school grades, the school met just one of 38 goals set for it by the State University of New York, which authorized the school and allowed it to stay open for two years in spite of its failures. The school also was rated a failure mill by the New York City Department of Education, according to the Big Apple edition of Chalkbeat.

As NY 1 anchor and Daily News columnist Errol Louis detailed yesterday, the failures of UFT’s charter lie squarely with the union itself. On UFT’s watch, the school burned through five principals within its first decade of existence — including a union flunkie put into the job by Weingarten when she ran the local. The fact that an AFT unit was running the show didn’t stop the kinds of clashes between management and teachers typical in a traditional district.

Meanwhile UFT took no advantage of the opportunities offered by the charter school model to take different approaches to building school cultures — especially when it came to kids condemned to special ed ghettos. UFT Charter meted out-of-school suspensions to 17.8 percent of special ed students in 2011-2012 and in-school suspensions to another 20 percent of them, according to data submitted by the school to the U.S. Department of Education. This is higher than the out-of-school and in-school suspension rates of  1.5 percent and 6.5 percent for kids in regular classrooms.

Even worse, UFT charter meted out corporal punishment to 4.4 percent of special ed students. Given that special ed kids accounted for just nine percent of UFT Charter’s students (which, by the way, is lower than the 13.1 percent average for Big Apple charters and 16.5 percent for the traditional district), the damage meted out by the school and the union to the special ed kids who were enrolled in its schools is just plain inexcusable.

Yet UFT did all it can to avoid accountability. Back in 2013, it managed to keep the charter open in part by moving the school into one of the traditional district’s half-empty school buildings; essentially, if not for the city’s practice of allowing charters to share space with its traditional schools (a practice the AFT local opposes when it comes to other schools), SUNY would have likely condemned the school to closure. Three years earlier, UFT successfully lobbied SUNY to allow the school to stay open. But the school was such as failure mill that SUNY only gave it a three-year extension.

By demanding accountability for other charter operators while evading such scrutiny for its own operation, AFT and its local essentially declare that they could care less about anything related to holding anyone accountable. The fact that the union couldn’t successfully run a charter demonstrates that the policies and practices it defends don’t work for children in any kind of school. In light of AFT’s failure in New York City, methinks the union is opposed to charters in part because it has had no success in running one. [Again, not shocking: There are plenty of traditionalists opposing reform because they have failed so miserably at operating schools. Projection, I guess.]

Once again, AFT has demonstrated in dollar and deed that providing children with high-quality education — including those in a school it is operating — is not of the foremost concern. Neither the views of the union nor those of its vassals deserve much consideration in any discussion about anything regarding education.

Beyond Apology: Education Next Edition

Will Hillary Dance to AFT's Tune?