Yet when it comes to the goal of preparing children for success in higher education, the most-critical goal in this second era of systemic reform, Tennessee is doing poorly on this front. This is clear from a Dropout Nation analysis of data submitted by the Volunteer State to the U.S. Department of Education. With far too few kids regardless of background taking college-preparatory courses, Gov. Bill Haslam and state legislators need to recommit to implementing Common Core and helping every child for whom they claim concern gain the learning they need in an increasingly knowledge-based world.

Within the past year, Tennessee has gone from being a promising bellwether for reform to an cautionary tale of what happens when politicians back away from doing the right thing for children.  Some Volunteer State Republicans in the legislature, taking marching orders from movement conservatives generally uninterested in reform and opposed to Common Core (as well as angered by Democrat Kevin Huffman’s hard-charging tenure as Haslam’s education commissioner), began agitating to halt the state’s so-far successful implementation of the standards.

But the effort to stop Common Core implementation gained momentum late last year when Haslam announced that he was convening a review of the standards even though he was assured of winning re-election. This signaled to Common Core foes that they could get their way. With Haslam backing away from the standards and their bete noire, Huffman, departing from the top education job last November, Common Core foes have gotten legislators to introduce legislation to halt the standards.

Now the fighting is less about whether the standards will remain in place than about how will they be eviscerated. With help from a group organized by his former campaign manager, Jeremy Harrell, Haslam is pushing back against the array of proposed legislation, especially House Bill 3 (which comes from State Rep. Billy Spivey). While the state’s district superintendents, along with reformers, are pushing to keep Common Core in place, movement conservatives and the National Education Association affiliate there are looking to put Common Core out to the proverbial pasture.

Yet amid all the effort to eviscerate Common Core, the question remains: Is Tennessee providing the college-preparatory curricula children need to successfully graduate from traditional colleges, technical schools, community colleges, and apprenticeships that make up American higher education. This is a discussion avoided by Haslam and his new education commissioner, Candice McQueen, as well as by Common Core foes in and out of the state legislature. Thanks to the U.S. Department of Education’s Civil Rights Data Collection the most-comprehensive database on college-preparation, Dropout Nation has the answer. It isn’t good at all.

Few Middle-Schoolers Take Algebra 1: Over the past couple of weeks, Dropout Nation has discussed how taking introductory algebra in middle school (along with strong support and acceleration of math curricula in the early grades) is critical to helping children gain the knowledge they need for success later in high school, in higher ed, and in their careers. Yet few states provide Algebra 1 to all or even half of their seventh- and eighth graders.

Tennessee is an especially atrocious example of states failing their middle-schoolers on this front. Just 6.5 percent of all seventh- and eighth-graders took Algebra 1 in 2011-2012, according to data submitted by the state to the federal government. Put simply, nine out of 10 Volunteer State middle-schoolers missed out on this key college prep course. Those levels are lower than the 29 percent average for California, Florida, Massachusetts, Minnesota, Pennsylvania, Virginia, and Washington, which have spent the past two decades mandating middle-school algebra, as well as the 29 percent rate for Maryland, which like Tennessee, has made little effort on that front.

One out of every five Asian and Native Hawaiian children took introductory algebra — levels lower than in the eight states reviewed earlier this month by Dropout Nation. The levels are even worse for black and Latino middle-schoolers; just five percent of black seventh- and eighth-graders along with 4.3 percent of Latino peers took Algebra 1 in 2011-2012. A mere 2.3 percent of middle-schoolers considered burdened by Limited English Proficiency also took introductory algebra. But the levels are not much better for white middle-schoolers; just 6.8 percent of these children took Algebra 1.

Some Common Core foes will try to argue that the levels won’t improve because the standards technically don’t call for introductory algebra to be taught until high school. But as your editor noted earlier this month, none of the five states surveyed in the Algebra 1 implementation report that are executing Common Core’s math standards experienced declines in the percentage of seventh- and eighth-graders taking Algebra 1. In fact, Massachusetts and Washington State adjusted the standards to continue the requirement. The problem in Tennessee on this front has nothing to do with Common Core and all to do with the lack of will among school leaders and politicians to do well by the state’s children.

Advanced Placement Coursework is Rarely Provided: Taking A.P. coursework, especially in math and history, is critical for all children — especially those from poor and minority households, in gaining preparation for success in higher education. Yet in Tennessee, few high school students are likely to be provided those courses. 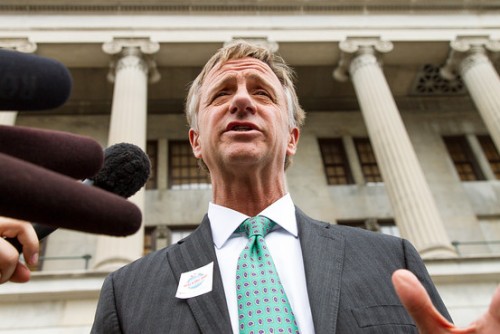 Tennessee Gov. Bill Haslam has been cowardly on the school reform front at a time the Volunteer State needs bold action.

Just one out of every 10 Volunteer State high-schoolers took A.P. courses of any kind in 2011-2012, a level half of those for Virginia and Maryland (which have been criticized on these pages for failing to provide our children in those states with college-prep curricula). Thirty-two percent of Asian high school students and one out of every five Native Hawaiian peers took A.P. courses, levels far above the statewide average, but lower than that for peers in the Old Line State and the Old Dominion (and likely lower than the national average).

The kids least likely to take A.P. courses are black and Latino children, who often come from households where families have never attended higher ed, and thus, need even more preparation than white or Asian peers. A mere 5.6 percent of black high-schoolers and nine percent of Latino peers were provided A.P. courses in 2011-2012, both below the statewide average; 5.2 percent of LEP students took A.P. as well. But white children fare little better; only 10.6 percent of white high-schoolers took A.P. coursework during the school year.

Not Enough Kids Are Given Advanced Math Classes: As you already know, trigonometry, statistics and other forms of advanced mathematics are key courses for children in order to take on middle class wage-paying blue- and white-collar jobs such as welding and marketing. But in order to learn those subjects, children must be provided those courses. This isn’t happening in Tennessee.

Only 11.3 percent of Volunteer State high school students were provided advanced math in 2011-2012. This means that nine out of every 10 kids in the late stages of secondary schooling were provided much-needed math instruction and curricula. To put in context, this is lower than the 18 percent average for Maryland and Virginia, the subject of this week’s This is Dropout Nation analysis.

When broken down by subgroup, this becomes clear: Not one subgroup in Tennessee has an advanced math course-taking rate greater than the 20 percent for Asian students. Just one out of every 10 white high-schoolers took advanced math, while a mere 8.2 percent of black counterparts and 7.5 percent of Latino peers took such coursework. No matter how one slices it, the Volunteer State is failing badly on the college-prep front.

Physics Course-Taking Rarely Happens: Careers in science, technology, engineering, and medicine are the gateways into the middle class. So high schoolers should be taking physics and other science courses — especially if they want to be successful in taking those courses when they enter higher ed and begin working toward STEM careers. But as you can already figure out, this doesn’t happen in the Volunteer State in any meaningful way.

For high school students in Memphis and the rest of Tennessee, Common Core implementation means college-prep curricula they haven’t been getting for years.

These low levels in physics may not be so bad if there were high levels of course-providing in other subjects. It isn’t. Just one out of every four Volunteer State high-schoolers were provided biology, another key college prep course that is what nearly every student in the nation is expected to take at some point. A mere one-in-five were provided chemistry. Chemistry. Add in the fact that few high-schoolers in Tennessee took A.P. science courses (or any science course at all), and it is clear that the state is committing educational neglect and malpractice.

What is clear from the data is that Tennessee is doing a terrible job in preparing children for higher ed and career success. But this isn’t shocking when you look at other data.

Twenty-one percent of Volunteer State community college students aged 17-to-19 (you know, college freshmen) took remedial math classes — and two out of every five failed to successfully complete them, according to Complete College America in its 2011 report. [Tennessee didn’t provide Complete College America with remediation rates for baccalaureate students.] There’s also the fact that the state’s math standards (before being replaced by Common Core) were rated D by the Thomas B. Fordham Institute in its 2010 study; this was better than the F rating given to them by Fordham a decade earlier.

With so many teens (especially those from poor and minority households) struggling to take on college-level work, preparing kids for the demands of higher ed while they are in elementary and secondary schools is of paramount importance. Yet the debate over halting Common Core implementation shows, neither Haslam nor legislators take these matters (or their obligation to children and taxpayers in the state) seriously. The governor, who has plenty of political capital to spend, shouldn’t have even indulged this discussion. Instead,Haslam should stand up strongly for Common Core implementation as counterparts such as Ohio’s John Kasich and Georgia’s Nathan Deal have done.

But Tennessee’s failures on the college prep front are even more embarrassing for the state because its senior U.S. Senator (and former governor), Lamar Alexander, is leading the charge to eviscerate the No Child Left Behind Act’s accountability provisions and has opposed the Obama Administration’s support for implementing Common Core. Given the shameful numbers in his home state (as well as the damage he is doing to his once-laudable legacy on advancing reform as governor and U.S. Secretary of Education), Alexander should be supporting implementation of the standards in his state as well as leading the charge for a stronger federal role in holding states accountable for preparing kids for future success.

Halting Common Core implementation now will do nothing more than stop the gains children in the early and middle grades are likely starting to make. So the state should continue putting the standards into place. At the same time, Tennessee needs to take other serious steps on the college prep front. This includes partnering with the National Math and Science Initiative on expanding A.P. courses to all students, as well as working with districts on accelerating math instruction with support (including providing Algebra 1 to middle-schoolers).

For reformers in the Volunteer State, as well as their counterparts in the rest of the nation, it is time to remind Haslam and the state legislature of their obligation to our children. This means continue implementing Common Core — or be held accountable for damaging the futures of kids who deserve better.

Build Up Our Black Sons

At the State LevelSchool Reform in the Empire State