Minneapolis’ Next Step on Oversuspensions

RiShawn Biddle
2 Comments on Minneapolis’ Next Step on Oversuspensions

Back in September, Dropout Nation took a hard look at Minneapolis Public Schools’ overuse of suspensions and other forms of harsh school discipline, detailing how Supt. Bernadeia Johnson’s move to halt the overuse of suspensions and expulsions on kids in its early childhood education, kindergarten, and first grade classes only scratched the surface of the district’s problem. Your editor called upon Johnson to go further and address the underlying instructional, leadership, curricula and diagnosis issues that were the underlying reasons why so many kids were suspended in the first place.

Some good news came from Johnson last week when she announced that her central office staff would review any suspensions of black, American Indian, and other minority children for nonviolent offenses recommended by school leaders on the ground. This can be a sensible interim step in overhauling Minneapolis’ school discipline practices if done properly. Your editor would have recommend that the district also review suspension recommendations for white kids as well because it is both the right thing to do — no child, regardless of their background, should be subjected to harsh discipline that is inappropriate for the behavioral issue at hand — and because it would allay any concerns from white families about reverse discrimination. But it does make sense for the district to monitor what school leaders and teachers are doing on the ground on this front.

Johnson deserves credit for taking another step. Of course, she’s not doing this just of her own accord. Thanks to an investigation by the Obama Administration as part of its efforts to halt overuse of suspensions and other harsh discipline — one that has been senselessly criticized by conservative reformers such as Michael Petrilli of the Thomas B. Fordham Institute (who doesn’t think that the disparate impact of overusing suspensions is a civil rights issue) as well as movement conservatives opposed to anything done by the administration on everything — the district is now being forced to deal with a problem it has long swept under the proverbial rug. [One of Petrilli’s staffers at Fordham, Jessica Poiner, rightfully chastised him for his less-than-thoughtful position.] Johnson’s move is an important validation of the Obama Administration’s sensible decision to address a civil rights issue (as it is constitutionally required to do) that is also a culprit of the nation’s education crisis.

But as your editor noted two months ago with the moratorium on suspensions of kids in the early grades, the review process isn’t enough. For one, the review will likely involve staffers who have been as much a culprit in the overuse of suspensions and expulsions in the first place; unless Johnson launches a division staffed by outsiders who can take a fresh look at how school leaders and teachers mete out discipline, the review process will just be a rubber stamp of status quo actions.

There’s also the fact that the review process doesn’t deal with another aspect of school discipline that is also a problem in Minneapolis: High numbers of referrals of black and Native kids to Hennepin County’s juvenile justice system, along with arrests by law enforcement. Two-point-six percent of Native kids attending the Twin City district’s schools, along with 1.3 percent of black peers, were either referred to juvenile courts or arrested, according to data submitted by the district to the U.S. Department of Education. That’s higher than the two-tenths of one percent of white kids, four-tenths of one percent of Asian and white schoolmates either referred or arrested. The good news is that none of these kids were arrested. 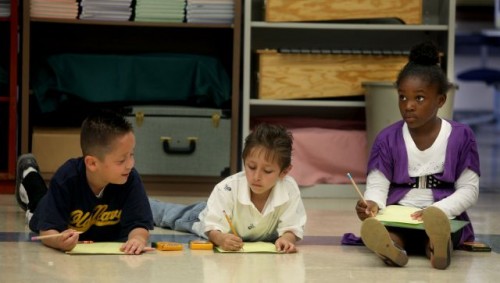 Photo courtesy of the Minneapolis Star-Tribune.

The more-important reason why the suspension reviews aren’t enough lies with the fact that the review process doesn’t address the cultural problems at the heart of Minneapolis’ problem in the first place. As Dropout Nation noted back in September, the district is dealing miserably with the underlying illiteracy that is the key culprit for student misbehavior. As Deborah Stipek and Sarah Miles of Stanford University determined in a 2006 study, kids who are functionally illiterate in third grade end up becoming discipline problems by fifth. With only 47 percent of black third-graders and 45 percent of Native peers in Minneapolis reaching the North Star State’s (rather lowly-set) level of reading proficiency according to its 2012 exams, it is no surprise that those kids are acting out in school; they know that the schools that they attend will never provide them the reading remediation they desperately seek.

Certainly this is a problem resulting from shoddy reading curricula. But it is also a problem of low-quality teaching. As your editor continually argues, the consequences of laggard instruction are borne both in the struggles of kids in academics, in their perceptions (as well as that of school leaders) of the potential of black and Native children, and how their learning issues are dealt with through overuse of harsh school discipline. Johnson herself made light of this last week when she revealed that 13 of the district’s schools — all of whom serve mostly poor and minority kids — were staffed by the highest levels of laggard teachers. This included Bethune Elementary, where one or more suspensions were meted out to 20.6 percent of black kids attending the school, nearly double the district’s already high 13.1 percent average, as well as Anishinabe Academy, where 13.6 percent of Native students were suspended one or more times, slightly higher than the district average of 12.6 percent.

For Johnson and the district to end overuse of suspensions and other harsh school discipline, they will have to address literacy and instruction. This means intensive reading remediation, especially in the early grades when discipline issues can be headed off, as well as leveraging approaches such as Response to Intervention to identify kids struggling with literacy. The district will also have to push hard, especially at the state capital as well as at the bargaining table with the American Federation of Teachers’ local (which has defended overuse of school discipline) in order to undertake steps to address low-quality teaching. Systemic reform, in short, is key to reducing overuse of suspensions for the long haul.

Johnson (along with the Obama Administration) deserves praise for tackling this problem head-on. But more needs to be done beyond suspension reviews to address discipline practices that condemn far too many Twin Cities children to the abyss.

Ed Schools Are Too Easy

A Teacher on the Shame of the Beltway