Apparently, American Federation of Teachers President Randi Weingarten is mad at Arne Duncan. Why? Because he dared to offer measured praise for the California Superior Court’s ruling in Vergara v. California that effectively put an end to the near-lifetime employment and teacher dismissal rules at the heart of the influence of her union and that of the National Education Association.

As far as Weingarten is concerned, Duncan was wrong to declare that the Vergara ruling offered California an opportunity to “build a new framework” for teacher compensation and evaluation that “protects students’ rights to equal educational opportunities” as well as provide “teachers the support, respect and rewarding careers they deserve”. As far as she was concerned, Duncan’s statement “added to the polarization” of debates over the reform of American public education, and “erodes” public confidence in the teachers for which the union claims to speak. Declares Weingarten (or, more accurately, her mouthpiece, Michael Powell): “teachers across the country are wondering why the secretary of education thinks that stripping them of their due process is the way to help all children succeed.”

For Weingarten, it is clearly frustrating that Duncan fact didn’t mimic the AFT’s talking points, as California Supt. Tom Torlakson has done, especially the argument that granting near-lifetime employment to teachers does no damage to the futures of children. The fact that Duncan even dared to disagree with the union was especially maddening. After all, Weingarten fears what will happen next to public education as she knows it. Writes Weingarten: “My fear is that the Vergara decision will set us back in our effort to help all kids succeed.”

As you would expect, Randi fails to mention a few inconvenient realities.

The first? That Vergara does little to lower public esteem toward teachers. If anything, by eviscerating state laws and practices that allow for even the most-incompetent teacher to gain near-lifetime employment, Vergara helps to elevate the profession itself. In particular, the abolition of California’s teacher dismissal law now makes it easier for districts and other school operators to sack laggards. Particularly the end of the Golden State’s overly-burdensome teacher dismissal makes it easier for districts to toss out criminally abusive teachers such as former Miramonte Elementary School teacher Mark Berndt (now facing charges of abusing children at the L.A. Unified school), who escaped scrutiny for so long because of the difficulties that came with sacking him.

This, in turn, helps our good and great teachers, who shouldn’t be forced to clean up the mess made by low-quality counterparts (in the form of children struggling in school because of shoddy instruction), or have to work alongside those being paid the same compensation in spite of subpar work. 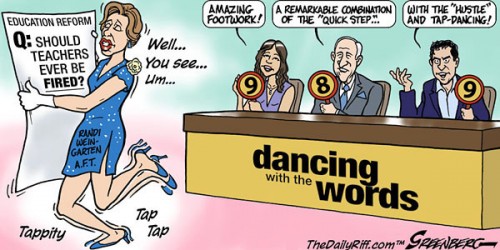 Just as importantly, the Vergara ruling even benefits struggling-yet-improving teachers who are emerging from poor performance during their first year in classrooms. As California Superior Court Judge Rolf Treu pointed out in his ruling, a perverse consequence of the Golden State’s tenure law is that districts can end up denying near-lifetime employment to such teachers because of the risk that they can end up with an incompetent who will never improve.

Given that, as Dan Goldhaber and Michael Hansen pointed out in their 2010 study on teacher quality, the average teacher working in their 25th year is no better than an instructor in their fourth, expecting districts to grant tenure to teachers in such a short time frame is ridiculous. By ending tenure, Vergara offers struggling-yet-improving teachers reasonable opportunities to become good and great.

Secondly, what Weingarten fails to mention is that Vergara helps children, especially those from poor and minority backgrounds, who need and deserve teachers with strong subject-matter competency, self-starter leadership ability, and empathy for every child. The end of reverse-seniority (or last in-first out) layoff rules, in particular, makes it easier for districts to strategically reduce payrolls during tough times by getting rid of those teachers who belong in classrooms.

As the Los Angeles Times pointed out in its 2010 report on the impact of L.A. Unified’s layoffs on student and school achievement, a fifth of the 1,000 young elementary and middle school teachers laid off were among the top fifth in improving student achievement; schools in the City of Angel’s poorest communities took the hardest hit because younger teachers usually start their careers working in those classrooms. This is borne out in nearly every study on the impact of last in-first out. 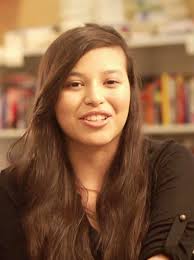 Apparently, based on Weigarten’s thinking, teenager Beatriz Vergara, the name plaintiff for the suit, is helping to erode public confidence in teachers. Right. (Photo courtesy of L.A. School Report.)

Given that there is no correlation between seniority and student achievement, it makes no sense to keep in place quality-blind policies that hurt the futures of children. Duncan is correct in stating that Vergara offers another step toward crafting moral and intellectually justifiable policies that improve the opportunities for children to be taught by good and great teachers.

Simply put, Weingarten’s arguments against Vergara and against Duncan’s statement hardly have merit. If anything, the fact that Weingarten fails to mention “tenure” and “near-lifetime employment” and “seniority” serves to remind all of us that she, and her union, are being intellectually and even morally dishonest about the damage to children wrought by the policies and practices they defend.

Randi’s problem has nothing to do with Duncan’s statement. It is that Vergara is another weakening of the AFT’s influence (and that of the National Education Association) over education policy — and a weakening that will extend from California to the rest of the nation as reformers mount legal suits and legislative efforts to end seniority-based privileges.

Randi’s issue has nothing to do with polarization. It is that after decades of defending morally repugnant policies that have kept even criminally abusive teachers in their jobs at the expense of children, the AFT’s (and NEA’s) can no longer make credible arguments that they have the best interests of children at heart.

Randi’s dilemma isn’t that public confidence in teachers is being eroded. It is that for the AFT’s coffers, the ruling again reminds teachers that the grand (and costly) bargain they struck with the union is no longer of any benefit to them. Particularly for Baby Boomers and hardcore progressives within the rank-and-file, the ruling is a reminder of how weak the AFT has become, and Weingarten’s unsuccessful triangulating has, in their minds, contributed to problem.

And Randi doesn’t fear a setback in kids succeeding. What she fears is that younger teachers long dismayed by the AFT’s defense of seniority-based privileges such as last in-first out that impede their career progress (as well as the rigging of AFT local elections that favor retirees over teachers still in classroom) will leave the union for professional associations that focus on elevating professionalism instead of on old school unionized that doesn’t befit teaching.

Weingarten shouldn’t get mad at Duncan for saying what needs to be said about the failed policies she defends. She should look herself in the mirror instead, and stop defending the indefensible.

A Step Toward BIE Reform?