A Step Toward BIE Reform?

RiShawn Biddle
Comments Off on A Step Toward BIE Reform?

When it comes to providing children with the worst American public education has to offer, few operators are as woeful as the U.S. Bureau of Indian Education the federal agency that is a hybrid traditional district, state education agency, and charter school authorizer serving 48,000 native children. Fifty-nine percent of BIE eighth-graders scored Below Basic in 2013, double the 26 percent national average, according to results from the National Assessment of Educational Progress; the average BIE eighth-grader’s math performance is three grade levels below the national average for all middle-schoolers heading into high school. If it were a traditional district, BIE would rank as the second-worst in the nation after Detroit Public Schools.

Thanks to the federal government’s spectacular mismanagement of BIE — including five leadership changes since 2007 — the agency’s operations are in shambles. As the U.S. Government Accountability Office pointed out in a report released last year, the logic-defying decision by the U.S. Department of the Interior to deny BIE control of its operations has resulted in bureaucratic dysfunction. The fact that BIE has failed to replace or repair many of the 65 school buildings identified back in 2009 as being dilapidated, hazardous, and unsafe — in some schools, exposed asbestos fibers, the presence of lead and other toxic materials, and water leaks near electrical outlets are the norm and not the exception — borders on the criminal. The shoddiness of BIE’s operations is especially horrific when compared to how well the federal government runs schools serving children of the nation’s military. All the while, the Obama Administration, which has been charged with running BIE for the past five years, has done little to address its woes.

Simply put, BIE needs an overhaul. So it is good news that the Obama Administration is finally announcing plans today to revamp its operations. But the initiatives won’t mean much if both the administration and Congress doesn’t make them a reality.

At the heart of the Obama Administration’s proposed overhaul of BIE is a move to fully transform the agency into a state education agency. Over the next two years, the 58 remaining schools BIE operates will be handed off to American Indian tribes. One hundred fifteen of the BIE’s schools are already run by tribes while another nine off-reservation boarding schools are privately-run. This move will certainly please tribes and Native activists who believe that Native communities are the ones best-fit to operate schools serving their own kids.

While BIE spins off its remaining schools, it is also revamping its operations to become a “school improvement organization” for the entire education system (including 115 schools already operated by tribes, along with the nine privately-run off-reservation boarding schools still in operation), helping tribes overhaul failing schools and address their teacher quality woes. This includes the creation of a “School Improvement Solutions Team” charged with helping tribes overhaul failing schools and developing comprehensive college-preparatory curricula that also appropriate to Native cultures. BIE will also develop of School Support Solutions Teams to help with operations.

BIE will also focus on improving teacher quality throughout the system. This includes providing professional development to teachers already on the job. But it also likely means that BIE will work with teacher quality outfits, most-likely organizations such as TNTP and Teach for America (the latter of which already does plenty of work in providing teachers to schools serving Native children), to recruit talented collegians into classrooms.

Meanwhile BIE will now directly oversee construction and maintenance of school buildings, taking the work out of the hands of its former direct parent, the Bureau of Indian Affairs. It is likely a key step to drafting a six-year plan to spend $1.3 billion on replacing and repairing BIE’s dilapidated schools. Interior is also reversing it made last year to shift BIE’s administrative operations from one Indian Affairs division — the Deputy Assistant Secretary for Management — to the agency’s regional directors without fully informing BIE’s bureaucracy.

Even bigger plans may become reality in the near-future. One of them: Embarking on its long-stalled plan to develop a unified accountability and school data system monitoring the performance of all of the schools BIE operates and oversees in 23 states throughout the nation. The proposal was developed two years ago as part of its No Child waiver request. Such a move would mean that BIE’s schools would no longer be monitored by a patchwork of state education departments. It would also pave the way for BIE to embark on other possible efforts, including developing its own teacher certification process that the schools it oversees would follow instead of that of individual states.

Another is the launch its competitive grant programs similar to those such as Race to the Top championed by the Obama Administration throughout the rest of American public education. Through the move, BIE would spur reform by rewarding tribes and schools implementing such reforms as developing new teacher evaluation systems using objective student test score growth data. Such a move is critical because BIE is not allowed by law to require tribes to improve teacher evaluations. BIE could also end being granted full status as a state education agency, giving it the ability to fully participate in Race to the Top and other existing competitive and formula-based grants. 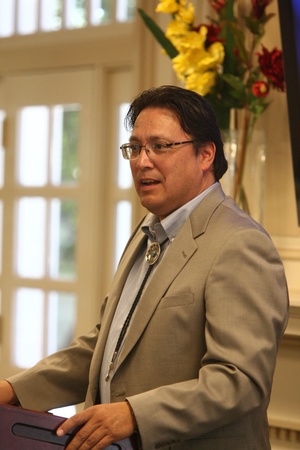 All of this is good news. By fully ditching its role as school operator, BIE gets out of a business that it has proven long ago it is too incompetent to do. By becoming a state education agency, BIE can also help tribes develop their own capacity to operate schools; this, in turn, helps Native communities take important steps toward providing their own children with the high-quality education they deserve. By giving BIE full control of its capital maintenance and administrative functions, it ends the fragmentation of operations that has made it difficult for it to engage in smart strategic planning needed to undertake reforms and handle such basic activities as supplying textbooks.

For reformers, BIE also offers an opportunity to advance systemic reform and build cultures of geniuses for Native students on a New Orleans-level of scale. BIE would be among the nation’s smallest state education departments, yet at the same time, covers a wider geographic scale than any of them. Addressing the underlying causes of the education crisis on a large scale will both yield important lessons for reform throughout the nation, and help some of our most-vulnerable children gain high-quality education they need to help preserve their cultures as well as build up their communities.

The biggest benefit of all lies in the federal government taking an important step towards making amends for subjecting generations of Native children to what can best be called educational genocide. Starting with the launch of the notorious Carlisle Indian Boarding School in 1879, the federal government focused its schools on assimilating Native children into American culture. By the mid-20th century, what is now the BIE opened 26 boarding schools (along with overseeing 450 others operated by missionaries) that subjected Native children to physical abuse, molestation, and educational abuse. As a Brookings Institution panel declared in the 1928 Meriam Report, the average Native child left school “poorly adjusted to conditions that confront him”.

By the 1970s, the federal government had abandoned the assimilationist approach to schooling Native children. But the damage done can be seen, not only in the high levels of young Native men and women dropping out into poverty and prison, but even in the high levels of unemployment that have helped perpetuate poverty in many Native communities (especially those without casinos). The continued mismanagement of BIE remains a moral stain, both on the Obama Administration’s checkered-yet-otherwise admirable record on school reform as well as on the nation as a whole.

Yet it remains to be seen whether any of the plans will become a reality.

For one, as I detailed last September, the Obama Administration hasn’t exactly done well when it comes to actually helping BIE make its reform initiatives a reality. The proposal to develop the unified accountability and school data system have been stalled since former Director Keith Moore left the agency in July 2012; the U.S. Department of Education still has not moved on the BIE’s No Child waiver proposal even as it has approved waivers (and made a mess of its entire gambit) in that time. Last year, Interior declined to allow BIE to launch its own battery of tests, a key step towards making accountability a reality.

Secondly, the Obama Administration hasn’t shown much in the way of commitment to providing BIE with stable leadership. It took nearly two years for the administration to appoint Moore as permanent director; after he left, the job was held by placeholders until current Director Charles Roussel (one of the interim bosses) was given the spot permanently. Considering the instability of BIE leadership, it can’t be helped that some Native education activists are skeptical that the new reform effort will become reality.

Thirdly, you must remember that BIE’s struggles as a school operator are matched by its failures as an oversight agency. Schools weren’t informed by BIE about whether or not they made Adequate Yearly Progress during the 2011-2012 school year until April 2013, seven months after the new school year began. During 2012-2013, BIE allowed schools in Arizona, Mississippi, and South Dakota to use NWEA’s assessments instead of those in the respective states in which they are located, then changed its mind and told those schools to use state assessments, forcing them to scramble for the test materials.

These problems are compounded by the reality that BIE staffers don’t fully understand the increasingly complex roles state education departments are now being asked to play in education governance, a consequence of the Obama Administration’s reform efforts (along with the impact of No Child and three decades of reform). BIE will need plenty of help, especially from reformers, to make any of its plans a success. Whether it will be accepted, especially given the skepticism of Natives to anything proposed by mostly-white school reformers (and even black and Latino reform activists, who are not always welcomed in Native circles) is an open question.

The biggest problem of all lies with the one group with which the Obama Administration hasn’t worked well at all: Congress. As the administration admits, some of the future plans on the table (including requiring tribe-operated schools to utilize new teacher evaluations) will require both Senate Democrats and House Republicans to pass a new version of the Tribally Controlled Schools Act. Given the preoccupation of the former on holding on to its slim majority, the unwillingness of the latter to give President Barack Obama a legislative victory, and the ire among both over Obama’s penchant for using executive orders to get around their opposition, let’s just say that any BIE reform plan that needs congressional approval is a no go for sure.
But the good news is that Obama Administration is finally taking steps to help Native children in the schools the federal government directly operates. Not only will this help end the nation’s education crisis, it will make amends for a legacy of near-genocidal practices that have damaged the communities of Native children deserving better.