Diane Ravitch Has No Shame

RiShawn Biddle
2 Comments on Diane Ravitch Has No Shame

It’s been long ago proven that Diane Ravitch no longer deserves to be taken seriously. Over the past few years, the once-respectable education historian has discredited herself with factual inaccuracies and and logical misfires in her sophistry. At the same time, she has disgraced her own legacy with incidents such as the attempt two years ago to politicize the massacre of 23 teachers and children at an elementary school in Newtown, Conn., as well as wrongly tarring former energy trader and school reform philanthropist John Arnold as a participant in the frauds committed by executives at the now-defunct Enron. [To Arnold, she did apologize — a month later.]

So it isn’t shocking that Ravitch engaged in what can best be called cynical race-baiting (and, at worse, craven bigotry) with a piece she wrote on her eponymous blog bemoaning school reform advocate 50CAN’s hiring of new generation civil rights activist Derrell Bradford as head of its New York branch. After declaring in the original version of the piece that 50CAN was just “another of those fake “reform” groups”, Ravitch wrote that she wished Bradford would have gone into lines of work that some people would say is more-befitting a black man. Wrote Ravitch: “my fondest hope is that you find a different field, say, sports or finance or broadcasting, where your talents are needed.” 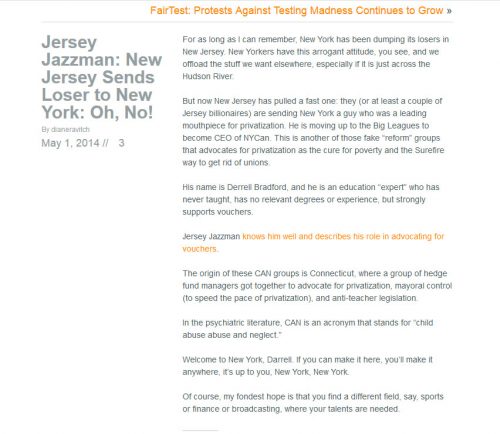 Apparently realizing that such a line may not go over too well with other people in this day and age, especially among some of the less-hardcore traditionalists and the progressives that make up part of her fan club, Ravitch revised the piece. But not before Michael Petrilli of the Thomas B. Fordham Institute, who has defended Ravitch in spite of her past misbehavior, called her out on the carpet for engaging in race-baiting. Ravitch has attempted to defend her statement by declaring that “I do not consider “sports” racist.” Her allies also attempted to white-wash her remarks. But Petrilli didn’t buy that statement. Wrote Petrilli: “You told a black man he should consider a job in sports. It’s OK to apologize.” [American Federation of Teachers President Randi Weingarten said she would do so if it was her who wrote it.] Bradford considered Ravitch’s words “unfortunate”. He’s a better person than Ravitch is.

Your editor would be disappointed in Ravitch — and yet, at the same time, forgiving — if this was the first time she engaged in such nastiness. To err is human and we will all make mistakes. But Ravitch has continuously engaged in intellectual charlatanism and rhetorical chicanery. So I’m not shocked at all that she did this. In fact, from her, I expect nothing less.

[Update: As you would expect, more of Ravitch’s fans, most-notably the teacher-writer whose piece led to Ravitch’s original commentary, are playing down and dismissing her remarks. Not exactly shocking. The most-hardcore of traditionalists are willing to embrace demagoguery, even racialism they declare that they claim to oppose, in order to sustain their ideology. Which, in turn, makes you wonder what they think about people of color, especially those with whom they disagree. And since many of Ravitch’s defenders also teach black and Latino children, makes you fear for the futures of our kids.]