The American Federation of Fat Cats

RiShawn Biddle
4 Comments on The American Federation of Fat Cats

Just before the shutdown, the American Federation of Teachers filed its latest Department of Labor report. And once again, there is more information on how much the nation’s second-largest teachers’ union spends to preserve its declining influence over education decision-making. For 2012-2013, the AFT spent $32 million on political lobbying activities and contributions to what should be like-minded groups; this, by the way, doesn’t include politically-driven spending that can often find its way under so-called “representational activities”. This is a 19 percent increase over spending by the union during the 2011-2012 fiscal year.

Among the recipients of the AFT’s largesse: The Clinton Global Initiative, the outfit founded by former President Bill Clinton which has been as pilloried for alleged pay-to-play tactics as it has been rightfully lauded for its otherwise noteworthy social reform efforts. A new recipient of AFT funds, Clinton Global Initiative collected $400,000 from the union during 2012-2013. [By the way, the consulting outfit run by former Clinton Administration honcho Harold Ickes, was paid $90,000 for its work.] Al Sharpton’s National Action Network received $300,000 from the AFT in spite of the civil rights leader’s support for the charter schools the AFT opposes. The Atlantic Monthly also received $75,000 from the AFT in the form of a sponsorship. [The magazine also picked up $275,000 from the union for ad buys and other activities.] The Rockwood Leadership Institute, which trains community leaders, got $33,000 from the union, while New York Times columnist Charles M. Blow picked up $7,500 for appearing at last year’s AFT convention.

Looking to win backing from black and minority outfits, the AFT gave $80,000 to the Congressional Black Caucus Foundation, the nonprofit arm of the power group within congressional and Democratic Party politics, and tossed $30,000 to the Congressional Hispanic Caucus Institute; the National Black Caucus of State Legislators got a mere $5,000 in union funds. As you would expect, the National Association for the Advancement of Colored People picked up $27,500 in AFT largesse in exchange for supporting union policies that damage the futures of black children, while the National Coalition on Black Civic Participation garnered $12,500, and the National Alliance of Black School Educators received $25,000.

Reaching out to churches, the AFT gave $15,000 to Catholics United, handed $5,000 to the Progressive National Baptist Convention, which represents black Baptist churches, and doled out $5,000 to Chicago’s Christian Community Development Association. The AFT also paid $96,000 to Clergy Strategy Alliance (now known as CSA Strategies), an outfit run by Huffington Post contributor Romal Tune which has been the union’s longtime partner in trying to win over faith-based groups. Dallas Area Interfaith, a Texas-based outfit, picked up $5,000 in AFT cash.

The AFT also stepped up its efforts to co-opt progressive outfits. It gave $25,000 to the Nation Institute, a wing of the left-leaning magazine, for one of its events; it also handed out $10,000 to the Center for Popular Democracy, an outfit that has campaigned against the expansion of charter schools and so-called “privatization” of American public education. Another $15,000 was given to the Netroots Foundation for a “member-related legislative meetings”; the parent Netroots Nation received $28,400 for the year. Policy Matters Ohio received a $25,000 donation from the AFT. The union also played upon last year’s massacre of 21 teachers and children at an elementary school in Newtown, Conn., that has fueled a national conversation about gun control; it handed $10,000 to the Brady Campaign, the outfit founded by the wife of the press secretary for Ronald Reagan paralyzed after the attempt on the former president’s life three decades ago. 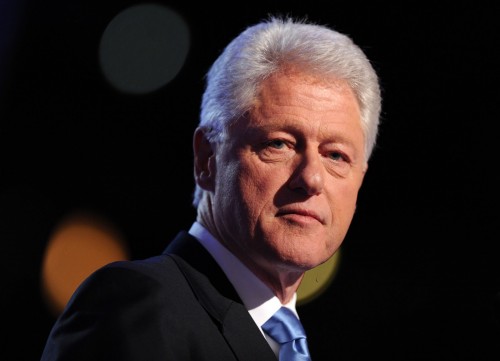 Former President Bill Clinton’s charity is among the beneficiaries of AFT largesse.

There’s also the work the AFT is doing to play off its defeat (and that of other public-sector unions) in Wisconsin as a result of Gov. Scott Walker’s successful effort to abolish its ability to force teachers to pay dues into its coffers in order to rally opposition to similar efforts in other states; that defeat (along with the lost dollars) led to the AFT affiliate agreeing last year to explore merging with the National Education Association Affiliate, WEAC, which has been weakened even more by the loss of dollars and members. The AFT doled out $388,301 to the Recommit Wisconsin Project, an Illinois-based outfit which produced a film decrying Walker’s efforts. Another effort targeting Wisconsin that’s based out of the Land of Lincoln, the Wisconsin Higher Education Project, picked up a $60,000 donation from the union. And the AFT put $60,061 into the AFT Wisconsin’s solidarity fund.

As for the usual suspects: The Economic Policy Institute, whose education policy studies (and that of the affiliated Broader Bolder Approach) dovetail AFT talking points (along with that of the National Education Association), picked up $150,000 from AFT coffers. The American Prospect magazine, which shares with EPI the same cofounders, received $100,000 from the union. The National Council for Accreditation of Teacher Education, which oversees the certification of the nation’s ed schools, received $89,585, while the National Public Pension Coalition (which defends the defined-benefit pensions at the heart of AFT influence) picked up $135,000 in union cash. And through the University of Colorado Foundation, the AFT poured $50,000 into the National Education Policy Center, the group run by Kevin Welner that has been a reliable mouthpiece for AFT and NEA positions against systemic reform.

Editor’s Note: Dropout Nation thanks Jeremy Lott of RealClearReligion for the new headline.

More on the AFT's Clout Buying