And Ken Cuccinelli’s Failure to Lead on School Reform

No one can ever call outgoing Virginia Gov. Bob McDonnell a strong and effective leader for systemic reform. After all, his four years in office has been one of missed opportunities and failures to use his considerable political capital to expand school choice, advance teacher quality reforms, and force the Old Dominion to deal realistically with how poorly children — especially those from poor and minority backgrounds — are being educated in the state. But it was good to see McDonnell step up to the plate this year to back the successful passage of House Bill 2096, which now allows the state to take over dropout factories and failure mills such as the Jefferson-Houston School in Alexandria (where only 22 percent of fourth-graders passed the state’s reading exam this year) and put them into a school turnaround district similar to the successful effort undertaken in New Orleans with the Recovery School District as well as similar efforts in Detroit and Connecticut. And the fact that McDonnell is facing down traditional districts in the Old Dominion looking to fight fiercely in court against the new law is a clear sign, if late, sign of leadership at a time when it is sorely lacking.

Which makes the decision by Attorney General Ken Cuccinelli, who hopes to succeed McDonnell as governor (and facing a tough election battle against former Clinton Administration mastermind Terry McAuliffe) to not back HB 2096 all so disappointing. It is apparent that the otherwise tough-talking politician has neither learned from McDonnell’s failures or from the successes of reform-minded governors (including fellow Republicans such as former governors Mitch Daniels and Jeb Bush, as well as Louisiana’s current governor, Bobby Jindal) in standing strong for building brighter futures for children.

Sure, Cuccinelli has talked a good game about reform. The Republican nominee’s platform does include plans to expand charters and pass a Parent Trigger law. But Cuccinelli has also been silent on the efforts he has undertaken so far in his role as attorney general. As Jay Mathews, one of the deans of education reporting, noted earlier this month in a Washington Post column, Cuccinelli ruled that an effort by Fairfax County to charge fees to children and families for taking Advanced Placement and International Baccalaureate courses violated the Old Dominion’s constitution. Through that action alone, Cuccinelli once again highlighted the reality that the overrated school district has done little to provide poor and minority children with comprehensive college-preparatory curricula they need for lifelong success.

So Cuccinelli had an opportunity to prove his bona fides last month after the Norfolk district, which has several schools that could end up being taken over by the state though its new Opportunity Education Institution district, declared that it would file a suit against the state over the new law. It would have been easy for Cuccinelli to do. Contrary to the declarations of Norfolk and other districts, HB 2096 doesn’t violate the Old Dominion’s constitution. In fact, under Article I, Section 15 of the law, the state is clearly charged with developing “an effective system of education throughout the Commonwealth”, while Article VIII, Section 1 requires the state to “provide for a system of free public elementary and secondary schools for all children of school age” and “ensure that an educational program of high quality is established and continually maintained”. Add in the U.S. Supreme Court’s ruling in Hunter v. Pittsburgh that districts, like all local governments, are merely arms of the state that have no authority beyond what state governments allow (along with the No Child Left Behind Act and even the waiver from the law granted to the state by the Obama Administration as part of its counterproductive gambit to eviscerate it) and it is clear that Virginia can take control of failing schools, and in fact, seize control of failing districts if it so chooses. 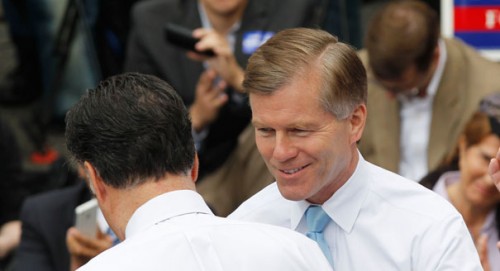 Cuccinelli misses on an opportunity to be a stronger leader on school reform than outgoing Gov. Bob McDonnell. Photo courtesy of Politico.

But Cuccinelli, likely fearful of losing more ground in his general election campaign against McAuliffe, said that the attorney general’s office would not represent the state in any lawsuit filed by Norfolk against implementation of HB 2096 because he felt the law was unconstitutional. In making that statement, Cuccinelli failed to actually do the job that a lawyer is supposed to do: Read and interpret the law, which would have led him to come to a different and correct conclusion. Just as importantly, Cuccinelli has essentially declared that he would not do the job he was elected to do as the Old Dominion’s chief legal officer: Represent the state in all legal matters. No citizen of any common sense, much less a reformer, can have confidence that Cuccinelli will do the job properly as governor because he’s not doing his job correctly right now.

Meanwhile Cuccinelli’s decision also shows that he cannot be expected to show strong leadership in advancing reform in the Old Dominion at a time when it is much-needed. As the state education department announced yesterday, 37 schools — including the aforementioned Jefferson-Houston and six of Norfolk’s elementary schools — have been identified as persistently failing; two schools, including Norfolk’s Lafayette-Winona Middle, along with the district’s Ruffner Middle (which managed to get off the list of “Priority” or failing schools) may end up being taken over by the state by next year. Helping children in those schools escape educational neglect and malpractice is high priority because each additional day they spend in those classrooms means coming closer to falling into the economic and social abyss. And with one out of every two Old Dominion fourth-graders on free- and reduced lunch reading Below Basic, according to the 2011 National Assessment of Educational Progress — along with a fifth of middle-class fourth-graders struggling with literacy — no governor can argue morally or logically against doing what is legal, sensible, and moral to help those children escape academic failure.

This isn’t to say that there aren’t concerns about the state taking over schools or districts. As Dropout Nation has noted over the past few years, school turnarounds, like those in Corporate America, are unlikely to yield real results. Just eight percent of laggard traditional district schools and nine percent of failing charter counterparts identified in 2003-2004 were successfully turned around six years later, according to the Thomas B. Fordham Institute in its seminal tome on transforming failing schools. A mere 11 percent of California elementary schools forced by state officials to undergo turnarounds made “exemplary progress” three years later, according to Bellwether Education Partners’ Andy Smarick in his famed text on school turnarounds. Cuccinelli’s support for passing a Parent Trigger law is sensible because families are more-likely to succeed in overhauling schools than either traditional districts that already control the districts or states. Yet the success of New Orleans’ Recovery School District, which focused on turning traditional district schools into charters (as well as authorizing new ones) is an example that Virginia should follow. And HB 2096 offers that opportunity to replicate this successful model in a state that sorely needs both more high-quality schools for poor and minority kids, as well as the expansion of school choice and Parent Power for all families regardless of background.

Cuccinelli could still pass the test if he reverses his decision and strongly defends HB 2096 in the courts. He will likely win too. But the clock is ticking. And if Cuccinelli doesn’t step up, he doesn’t deserve to win higher office.

Jerry Brown's Opportunity to Act Like a Leader for Children...

Another School Pension Mess Michael Bloomberg is Leaving Behind