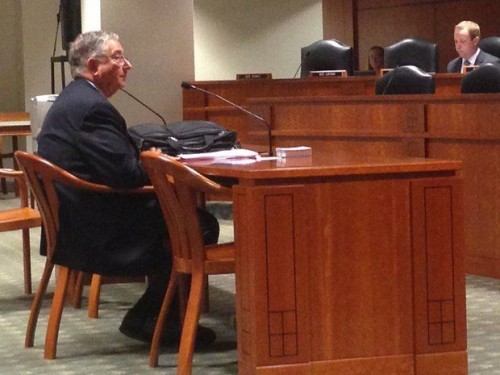 When it comes to the battle over the implementation of Common Core reading and math standards, one thing is clear: The coterie of movement conservatives, hardcore progressives among traditionalists, and once-sensible conservative reformers will use any kind of conspiracy-theorizing, mudslinging, and class warfare rhetoric to advance their cause. Particular among their spin is that the efforts of the Bill & Melinda Gates Foundation to support development and implementation of Common Core — including its funding of think tanks and other organizations (along with the National Governors Association and Council of Chief State School Officers, the two groups representing the nation’s governors and state school leaders which developed the standards) is some sort of stealth conspiracy against the American democracy and the visions of American public education to which they hold dear.

The spin job, which plays on the rather laughable belief that private-sector players (including wealthy philanthropists) cannot possibly have anything more than a nefarious interest in using their resources, financial and otherwise, in advancing systemic reform, has also been used by Common Core opponents to also impugn the credibility of the organizations and players who advocate strongly for the standards. For the conservative reformers opposed to Common Core such as University of Arkansas Professor Jay P. Greene and Pioneer Institute’s Jim Stergios, the Gates Foundation conspiracy-theorizing proves to be particularly useful in their bitter battles with fellow-travelers such as Thomas B. Fordham Institute’s Chester Finn and Mike Petrilli, who are also their competitors for financial resources and political clout in both the school reform and conservative movements.

So it isn’t shocking that Stergios’ underling at Pioneer, Jamie Gass, along with Greene and Oakland teacher (and Education Week columnist) Anthony Cody, have played upon the move by one Michigan state senator, Tom McMillin to question Finn about Fordham’s financial ties to Gates Foundation — including $6 million in grants — during a hearing held by a state legislative panel reviewing the standards, and essentially accusing the think tank of being too conflicted to provide credible analysis of whether Common Core is better than other state and international standards. [Considering that most state legislators, like their congressional counterparts, rarely do any kind of leg work for themselves, you can easily bet that either Pioneer Institute or one of the other think tanks arguing against Common Core implementation likely encouraged Sen. McMillin and his staff to take up that line of questioning.]

As a result of McMillin’s questioning, Common Core foes are slyly implying that Fordham has failed to disclose the role Gates Foundation has in funding its review of the standards– and are trying to argue that the think tank can’t offer any legitimate praise or criticism of them. Cody declared that the discussions about Gates Foundation’s funding of Fordham shows that the think tank has “a real conflict of interest, and his organization cannot be considered a legitimate source of independent expertise on matters such as the Common Core”. Greene proudly harrumphed on his eponymous blog that “Over $6 million can buy some really good grades”; Greene later attempted a Randi Weingarten-style non-apology apology, likely after getting flak from fellow reformers for the rather sleazy statement. [The well-practiced Weingarten does it better.]

[Engaging in a bit of the illogical arguments that typifies the usually-sensible Greene’s anti-Common Core commentary these days, he also tried to put former Gates Foundation education czar Tom Vander Ark into the middle of his anti-Common Core arguments by mentioning a recent study on New York City’s implementation of the small high schools undertaken by Gates Foundation during his tenure; Greene fails to mention how well or poorly the small high schools strategy has worked out in other districts, including Indianapolis Public Schools, where, unlike New York City, the principals who ran the original failing large high schools were still overlords of the smaller high schools being operated; Greene also fails to mention that Vander Ark is a leading Common Core supporter. Typical.]

The fact that Fordham has been quite upfront about Gates Foundation’s funding of its work makes the arguments of Greene, Cody, and Pioneer Institute about its supposed lack of disclosure rather spurious. Given the disclosure — as well as Fordham’s own thoughtful reviews of Common Core — the conflict of interest arguments don’t stand up either. The latter, in particular, fails to keep in mind the reality that organizations can already have an interest in pursuing a set of policies long before a philanthropy comes to fund it. This is especially true in the case of Fordham, which has long been among the leading players among standards-and-accountability activists within the school reform movement. By the way: One can raise questions about Greene’s and Pioneer’s respective conflicts of interests when it comes to their own advocacy. After all, Greene’s University of Arkansas receives through its own foundation funding from the Walton Family Foundation, a champion of school choice, for education policy activities (including $329,125 in 2012 alone), while Pioneer Institute (whose fervent opposition to Common Core is matched by its championing of choice) also received money from Walton Family and from the American Principles Project, the latter of which is also a Common Core foe.

[Before anyone asks: Your editor’s communications consultancy, which operates separately from RiShawn Biddle Communications, the parent company of Dropout Nation, has worked with a number of organizations which have been backed by Gates Foundation, including Fordham, the National Council on Teacher Quality, and Black Alliance for Educational Options. None of these past and present associations has ever stopped this publication or yours truly from calling out these and other organizations, most-notably Fordham, when they engage in faulty thinking.]

There accusation by Greene that Gates Foundation has bought Fordham’s integrity is especially indefensible — especially when one actually looks at Fordham’s review of Common Core’s reading and math standards in 2009 (before it received Gates Foundation funding) and 2010 (after it was funded). Fordham’s preliminary review of Common Core both pointed out its flaws — including the fact that the math standards gave equal weight both to those aspects that are key to higher ed success and those that were mere fodder — as well as its strengths; the fact that Fordham rated Common Core a B — just a rating below that of TIMSS and higher than that of PISA itself — shows that the think tank behaved with integrity on this front. That Fordham has consistently noted that Common Core’s reading standards were not superior to that of California, the District of Columbia, and Indiana (and that 11 states had math standards that were equal to that of Common Core) also validates Fordham’s credibility.

Meanwhile Common Core foes have to admit that Fordham’s point — and that of other supporters — that the standards are better than those of all but a few states; this, by the way, is conceded by two Common Core foes, Greene’s University of Arkansas colleague and Pioneer Institute’s resident “expert” Sandra Stotsky (when she’s not engaging in her ego-driven opposition to the standards), and Stanford’s James Milgram. If Fordham just willing to sell its integrity for money, then it would have ranked the Next Generation Science Standards more-highly than the mediocre rating it gave the standards in its review released this past June; after all, Fordham’s review is funded by the General Electric Foundation, which also funds the science standards effort. Greene, in particular, should offer a genuine apology to Finn and Petrilli for engaging in such nastiness. But I wouldn’t hold my breath waiting for that to happen.

The bigger problem with the Fordham-bashing, along with the overall Gates Foundation conspiracy-theorizing, is the implicit statement that those of us in the private sector have no place in shaping the policies and practices that shape American public education. This argument, usually advanced by traditionalists is absolutely anti-intellectual.

After all, it is companies and individuals in the private sector — including the founders of the Gates Foundation and the tech giant from which they derived their fortune — from which traditional districts and other super-clusters in education derive their funding. The private sector also bears the full consequences of the nation’s education crisis, especially through the high taxes they must pay to provide welfare to high school dropouts who are on unemployment lines as well as those who are in the nation’s prisons and jails. So it is natural that those of us with means, especially a wealthy entrepreneur and his foundation should have a healthy interest in improving the world in which he lives, a sensible concern for how the taxes he pays is spent in education, and a legitimate self-interest in leaving his mark. This is no different than what any of us or any of the organizations for which we toil or own do on a daily basis, albeit with less money.

More importantly, it will take all hands to transform American public education in order to provide all children, especially kids from poor and minority backgrounds, the high-quality education they need and deserve. This includes those who are in the private sector, who have legitimately concerned about the fact that so many children are not being provided the comprehensive, college-preparatory curricula they need and deserve in order to succeed in an increasingly knowledge-based economy. Tackling all the underlying causes of the nation’s education crisis will also require learning from how companies and organizations outside of public education have successfully dealt with similar issues, especially in the areas of recruiting and rewarding high-quality talent. No one can legitimately expect the private sector to stay on the sidelines, especially given that the so-called experts within American public education have failed our children so miserably especially in condemning so many they don’t want to teach to special ed ghettos and alternative school way stations to dropping out.

One wouldn’t expect Cody to get this. After all, he is a traditionalists and a hardcore progressive type at that; such anti-intellectualism, hypocritical as it is given the role of teachers’ unions in shaping education, is coin for the realm. But Greene (whose education research and polemics during his days at the private-sector Manhattan Institute have helped lead to states reporting more-accurate graduation rates and expanding school choice), and Pioneer Institute (a private-sector institution which helped advance school reform in Massachusetts) have no such excuse whatsoever. In fact, if the thinking in which Greene and Pioneer’s staffers now engage were applied to their own efforts, then they too shouldn’t be engaged in systemic reform. But let’s be clear: Greene or Pioneer’s staffers don’t truly oppose any form of private-sector involvement. Particularly in the case of Greene, the real issue is as much about the decision by Gates Foundation to focus its resources on a number of reforms with which he has philosophical disagreement — and not on his silver bullet of expanding school choice — as about some of the real concerns he does have about the philanthropy’s research practices.

Greene and Pioneer Institute certainly have right to disagree with the Gates Foundation’s decisions and philanthropic choices. But the foundation’s support for advancing Common Core is perfectly defensible and respectable, especially in light of the fact that it will take myriad solutions to help all kids succeed. And those who are working with Gates Foundation to support those solutions also deserve respect. After all, like Greene and Pioneer Institute, they are school reformers too. This isn’t to say that reformers shouldn’t disagree with each other; conflict is how we can develop solutions and sharpen rhetoric against traditionalist thinking. But when the school reform movement gets into battles over silver bullets, it will fail in its mission for all children.

At this rate, Common Core foes will have an even harder time convincing thoughtful people of the validity of their positions.