Virginia is Still Dishonest About How Poorly It is Serving Kids 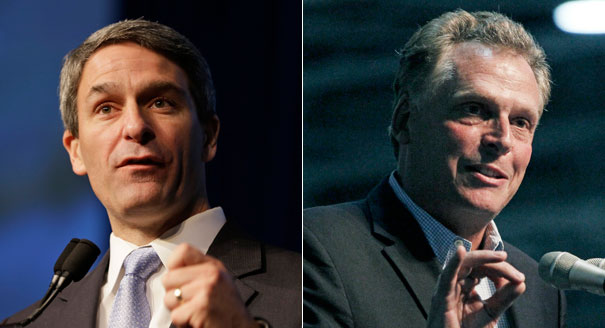 Don’t hold your breath hoping for any of Virginia’s leaders — including gubernatorial candidates Ken Cuccinelli and Terry McAuliffe — to embrace systemic reform.

When it comes to proficiency, Virginia’s education officials have long attempted to argue that its districts are all above average. Yet this thinking doesn’t stand scrutiny when you compare the percentage of children scoring at the highest levels on the Old Dominion’s battery of exams to the percentage of kids passing the National Assessment of Educational Progress, the federal exam of student achievement. And this lack of candor about the performance of districts and other school operators in improving student achievement is another example of the state’s longstanding unwillingness to embrace much-needed systemic reform.

Forty-one point four percent of Virginia’s fourth graders scored Pass Advanced (the highest level of proficiency on a three point scale that also features “Pass Proficient — the equivalent to Basic and Proficient levels on NAEP– and Fail Proficient, or equivalent to NAEP’s Below Basic), on the reading portion of the state’s test. Sounds good at first, but that is four times higher than the 11 percent of Old Dominion fourth-graders reading Advanced on NAEP’s 2011 edition. This inflation of school performance by the state has been happening for years. Back in 2007, a year after the state launched a new version of its tests, 46.4 percent of Virginia’s fourth graders scored Pass Advanced, five times higher than the nine percent of fourth-graders scoring Advanced on NAEP; in fact, more fourth-graders scored Pass Advanced on the Old Dominion’s reading test than Pass Proficient (which was reached by 40.7 percent of fourth-graders in the state). Such egregious overstating of how well schools in the Old Dominion is one reason why Education Next ranked it among the worst states in setting test score proficiency targets and cut scores, dinging the state with a D+ in reading; only six other states — Georgia, Alabama, Texas, Michigan, Idaho, and Illinois — are so brazen in being deceptive about what proficiency means.

Simply put, Virginia refuses to be honest with families, taxpayers, and children about the rather mediocre performance of its districts in helping all students gain the knowledge they need for lifelong success. This low rate of improvement –especially among fourth-graders, whose success or struggle in reading and math is harder to improve once they move on to the latter grades — stands in contrast to the improvements both nationwide and in Florida, a southern state peer of Virginia that has been more-aggressive in systemic reform. Between 2003 and 2011, the percentage of Old Dominion fourth-graders reading Below Basic declined by just one percentage point (from 29 percent to 28 percent), a lower rate of improvement than the six percentage point decline in early grade illiteracy experienced nationally in that period (from 39 percent to 33 percent), and the 11 point decline in illiteracy experienced Florida (from 40 percent to 29 percent). The Old Dominion also trailed both the nation and the Sunshine State in boosting the percentage of fourth-graders reading at Proficient and Advanced levels, with just a two percentage point increase in kids reading at those levels (from 37 percent to 39 percent) versus the three percentage point increase nationally (from 31 percent to 34 percent) and the eight percentage point increase by Florida (from 27 percent to 35 percent).  The average Virginia fourth grader reads half a grade level better than a similar student did nine years ago, staying apace of the nation as a whole, but the average Florida fourth-grader, for example, reads almost a full grade level higher than a similar student nine years ago.

Certainly NAEP isn’t fine-tuned enough to provide specifics on why Virginia is trailing the nation in improving student achievement. But the data does point to the consequences of the self-satisfaction with the status quo among Virginia’s education and state leaders. The state continues to stand pat on reading and math standards even as 45 other states and D.C.  improve their own by enacting Common Core. While Virginia’s reading standards are still on par with Common Core, according to the Thomas B. Fordham Institute in its report released three years ago, the math standards were considered “clearly inferior” than that being undertaken by other states. The state’s fourth grade math standards wouldn’t have met the standards set by Singapore and the six other top-performing nations in that subject, according to the American Institutes for Research’s own analysis of American curricula standards. By standing pat, Virginia has all but assured that its children, especially those from poor and minority backgrounds, will continue getting an education unfit for their futures.

The state also allowed districts such as Fairfax County to evade their responsibilities toward preparing all children for success in higher education and life. The Old Dominion’s new accountability system, approved by the Obama Administration as part of the state’s successful request to evade the No Child Left Behind Act, only triggers consequences for districts for failing to serve children if they lose accreditation; considering that accreditation is as atrocious for elementary and secondary education as it is for higher ed institutions, it likely means that a district can get away with poor performance for years before the state steps in. Virginia’s overall proficiency targets, also approved by the administration, would have allowed districts to get away with ensuring that 57 percent of black students (and 65 percent of Latino peers) are proficient in math by 2016-2017, compared to higher targets for white and Asian peers. It was only after outrage from groups such as the National Association for the Advancement of Colored People’s Old Dominion branch, which laudably pushed back against those low expectations, that Virginia (at the behest of an embarrassed Obama Administration) moved away from its Plessy v. Ferguson-like targets. And through its Virginia Grade Level Alternative assessment regime,  the state allowed districts such as Fairfax County to offer low-quality curricula to kids they didn’t want to work hard to education. Only in 2011, after reports about the cheating of kids from reporters and opinionists such as Barbara Hollingsworth of the now-defunct Washington Examiner, did state officials finally put the kibosh on the gamesmanship.

Meanwhile the lack of leadership on the education front from outgoing Virginia Gov. Bob McDonnell has been as embarrassing to both him and the state as the scandal involving a campaign donor that has tarred his legacy. Since taking office nearly four years ago, McDonnell has been reluctant to aggressively leverage his political capital (and general popularity) to advance systemic reform. Despite the fact that his party had control of both legislative houses for most of the past two years, the most McDonnell managed to do was to pass the voucher-like tax credit plan (which has been criticized for only allowing those providing scholarships to poor kids to write off a mere 65 cents of every dollar spent, or less than similar plans) and a weak charter school expansion that has only allowed four new charters to be opened this past school year. Only this year did McDonnell managed to make real headway on reform with the passage of House Bill 2096, which now allows the state to take over dropout factories and failure mills such as the Jefferson-Houston School in Alexandria (where only 22 percent of fourth-graders passed the state’s reading exam this year) and put them into a school turnaround district similar to the successful effort undertaken in New Orleans with the Recovery School District as well as similar efforts in Detroit and Connecticut. But McDonnell’s lack of real effort on school reform, along with his unwillingness to support those he has charged with leading his reform efforts (including former Black Alliance for Educational Options boss Gerard Robinson, who left as Secretary of Education left the job after a year of getting little done) is absolutely shameful and unacceptable.

Whether or not McDonnell’s potential successors as governor will do better is an open question. Republican Ken Cuccinelli finally took some time last week from  to unveil an education reform agenda that includes expanding charters and passing a Parent Trigger law. The agenda of his Democrat opponent, former Clinton Administration official Terry McAulffe, is merely a shoddy collection of platitudes that includes such themes as “Letting Teachers Teach” while offering little in the way of concrete policies he would try to pass. Neither candidate proposes to do the one thing that could help spur systemic reform: Sacking Supt. Patricia Wright, whose regime of defending the status quo from any real changes is one reason why the Old Dominion is doing so poorly by its children. Considering that neither candidate has a real advantage in the polls, it’s hard to know whether this year’s election will lead to any end to complacency on the education front. So it will take reformers — especially Beltway policy types who live in the Old Dominion’s suburbs surrounding D.C. who have been unwilling so far to do anything — civil rights groups, and business leaders to finally force whoever succeeds McDonnell and the state legislature to finally take its obligations to children seriously.

Your editor isn’t exactly holding his breath waiting for that to ever happen.

Voices of the Dropout Nation in Quotes: Embracing High Quality Schools No Matter What They Are