Dropout Nation Editorial Board
Comments Off on Voices of the Dropout Nation in Quotes: When We Provide Children Worthless Learning 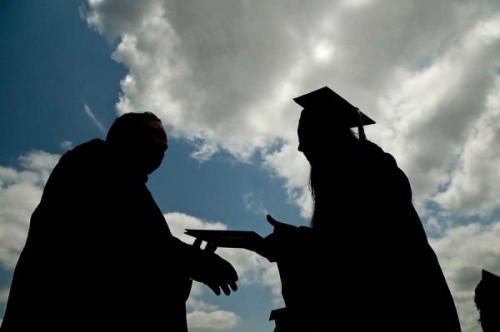 “Congratulations, you have graduated from one of the most terrible, substandard school systems in the entire world. You have just spent the last…12 years receiving one of the worst educations on earth. You are at least four, five steps behind people in other countries that are younger than you.

Hip-hop artist Lupe Fiasco, offering to young black men at the 2013 Mass Black Male Graduation And Transition To Manhood Ceremony — and to all of us — another reason why we must transform American public education.

In Detroit, a reckoning is near. A recent report from the city’s emergency manager on its deteriorating finances reads like a municipal adaptation of the Book of Revelation. The city’s population has dropped by about a quarter since 2000. Its rate of violent crime is five times the national average. Fires are rampant. Streetlights don’t work. The budget deficit is nearly $380 million, while long-term liabilities may total more than $17 billion. Detroit’s emergency manager, Kevyn Orr, has even considered selling the city’s art collection. Orr is now negotiating a reorganization plan with unions, creditors and bond insurers. If those talks fail, Detroit could become the largest city in U.S. history to file for Chapter 9 bankruptcy protection. The unions should strive to make a deal before that happens, even if it means forcing retirees to take substantial pension and benefit cuts. State taxpayers should recognize that it’s in their best interests to help those retirees out. And Orr must avoid unduly violating bondholders’ trust. The consequences of failure could reach well beyond Detroit…

It sounds deeply unfair to privilege investors over retirees. But because retirees were promised the most — Orr estimates the city has some $3.5 billion in unfunded pension liabilities alone — they will have to give up the most. It’s not an issue of fairness so much as arithmetic. And the dangers of forcing bondholders to take outsized losses are clear. Michigan Governor Rick Snyder indicated last week that he would support a reorganization plan for Detroit in which unlimited-tax general-obligation bonds would be treated on par with pension and health-care liabilities. Such a plan would not only ensure that Detroit will have a hard time getting access to capital markets anytime soon, it could make investors less likely to fund public projects across the state at reasonable terms… they make up only about $369 million of Detroit’s liabilities. Even a complete repudiation wouldn’t much reduce the $17 billion the city is on the hook for. It would, however, further impair the city’s ability to borrow — mostly to make a point. The emergency manager wasn’t appointed to make a point. He was appointed to get Detroit back on the path toward solvency.

Bloomberg News’ editorial board, pointing out the realities that are being faced now by Detroit — and will confront traditional districts and states struggling with more than $1.1 trillion in defined-benefit pension liabilities and unfunded retired teacher healthcare costs.

More than 80 percent of Michigan schools have opted to become school-of-choice districts since 1996, when they were first allowed under state law. Districts may open themselves to non-resident students, who arrive with backpacks full of cash – the per-pupil allotment from the state. Schools of choice have expanded the options for parents dissatisfied with their local schools, and have provided a financial boost to districts; it’s also one of the eight “best practices” districts can pursue for a $52-per-pupil funding boost in the most recent iteration of Gov. Rick Snyder’s education policy.

But some districts have resisted opening their doors to non-resident students. The law requires an annual vote by the board on the question, and in Grosse Pointe no one can remember a single vote – not one, not ever – in favor of it. School board candidates pledge their loyalty to the status quo, and the issue is only discussed in terms of how fiercely it will be resisted by administrators, parents and trustees. In Grosse Pointe, school choice is like Communism in the 1950s: You can’t stand too strongly against it.

Once Again, It's Time to Break Up L.A. Unified