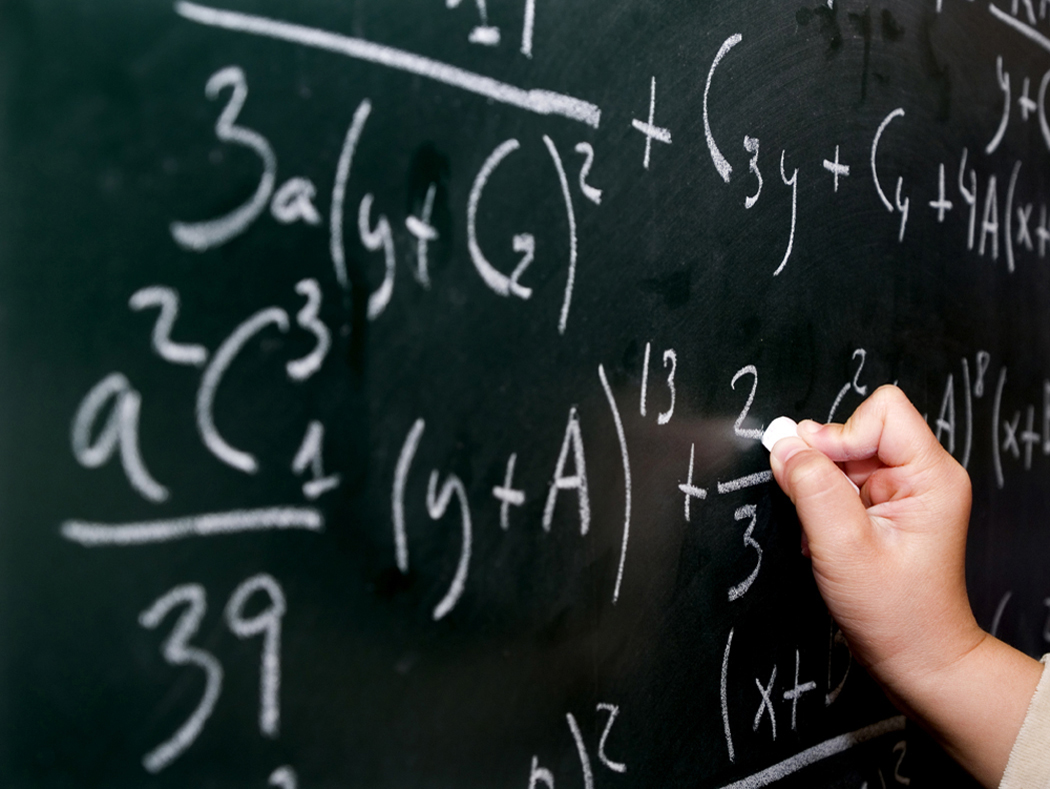 All kids can learn. It’s up to the adults to provide them the knowledge they need.

Just one out of every five middle-school students in seven states — California, Florida, Massachusetts, Minnesota, Pennsylvania, Virginia, and Washington State — was provided Algebra 1 courses during the 2009-2010 school year. The woefulness of that statistic becomes even more so when you realize that these states have been the most-aggressive in pursuing the goal of providing all middle-school students with this important building block for success later at the traditional colleges, technical schools, and apprenticeship programs that make up higher education.

But as Dropout Nation dug deeper into the data culled from the U.S. Department of Education’s civil rights database, it is especially clear that children from poor and minority backgrounds are being deprived of the college-preparatory curricula they need for future success.

A mere 13 percent of American Indian and Alaska Native students in these seven states took Algebra 1 in 2009-2010, the lowest percentage among all racial and ethnic groups. Just three states –California, Florida, and Virginia — have 15 percent or more of Native students learning about introductory algebra. Black and Latino middle school students are also less likely to gain access to Algebra 1. On average, just 16.8 percent of Latino middle-schoolers and 17.2 percent of black peers took Algebra 1 in 2009-2010. This is versus 28.5 percent of Asian students and 22.3 percent of white children in the middle grades in each state.

Only in two states — California and Virginia — was Algebra 1 provided to more than 15 percent of all middle-schoolers regardless of background. In fact, California has higher percentages of black, Latino, and American Indian-Alaska Native middle school students taking introductory algebra than any of the seven states analyzed for this report, with 28.5 percent of Latino seventh- and eighth-graders, 27.2 percent of black middle-school peers, and 23 percent of Native students taking introductory algebra. Unfortunately, the gains may be wiped out thanks to the decision by the Golden State’s board of education earlier this year to no longer require Algebra 1 in middle school, a decision that came after a decade of battles between reformers and traditionalists — including districts — which had long opposed being required to provide middle-schoolers with college preparatory math.

Meanwhile Washington State had the lowest percentages of Native, Latino, black, and white middle-schoolers taking the college-preparatory coursework among its peer states. Just 14.5 percent of white seventh- and eighth-graders, 10.5 percent of black peers, 8.6 percent of Latino middle-schoolers, and 7.3 percent of Native middle school students took Algebra 1 in 2009-2010. One does have to keep in mind that the Evergreen State only began requiring Algebra 1 to be provided to middle-schoolers in 2008, so the numbers may have since improved.

It isn’t as if many of these children cannot do the work. Twenty-three percent of Massachusetts’ eighth-grade black students scored at Proficient and Advanced levels on the 2009 National Assessment of Educational Progress. Given the low levels of black middle-schoolers taking Algebra 1 the year after NAEP was given to the previous year’s students, it is quite likely that half of black students with the demonstrated ability to take on introductory algebra didn’t get the chance to do so; even the 39 percent of Bay State black students who scored at just Basic proficiency could have benefited from the challenge of taking introductory algebra with just a little extra help if districts in the state offered it to them. This is a typical story. Twenty-three percent of Native eighth-graders scored at Proficient and Advanced levels on NAEP in 2009; in Florida, 22 percent of Latino eighth-graders scored at Proficient and Advanced levels.

Preparing kids for success in adulthood must start early. But in many states, many kids aren’t even taking Algebra 1 — or getting the building blocks for math in earlier grades.

As Dropout Nation noted back in April — and as made clear in this week’s Podcast — the fact that states that have aggressively pushed for Algebra 1 to be taught all kids have not done nearly as well as expected in actually providing it isn’t shocking. Far too many kids — especially those from poor and minority backgrounds — are not being provided college-preparatory curricula. Some 614,445 poor and minority high school students did not take Advanced Placement courses in 2009-2010, according to a report released this month by the Education Trust. The College Board also found 72 percent of black high school graduates from the nation’s Class of 2012, along with 75 percent of Native peers, and 66 percent of Latino graduates with the capacity to take on AP math courses (as measured by the Preliminary Scholastic Aptitude Test) never took those courses. Simply put, there are plenty of kids who had the capacity to take on challenging math who were never provided the opportunity to do so.

One underlying reason for this lies with the fact that many school districts segment their most-comprehensive courses for just those kids who they consider gifted. This particularly impacts poor and minority families – including those from first-generation middle class households – who don’t understand how to game those systems and approval from the teachers and guidance counselors who serve as gatekeepers to those programs. This gatekeeping, along with the use of faulty I. Q. tests (and other Zip Code Education policies), explains why 3.4 million children from poor backgrounds — many of which came from homes where parents were either dropouts or merely received high school diplomas — were among the top-performers in their schools, but never were placed in college track coursework, according to a 2007 study by the Jack Kent Cooke Foundation.

Behind all this gatekeeping is the view among many traditionalists that there are some kids who just aren’t capable of high-level work. This is especially true when it comes to math, which many of them think is too hard for most kids who, in their minds, won’t even use anything more than addition and subtraction in their daily lives. As Dropout Nation Contributing Editor Steve Peha has pointed out, teachers seem to think that “reading… is an aptitude” while “math is an attitude.” This is a legacy of the racialist 20th century thinking about the capacity of poor, black, and immigrant children that led to the nation’s education crisis — including ability tracking and the comprehensive high school model.

There is also the matter of low-quality math curricula — and that starts early. Kindergarten teachers often don’t focus on instructing kids on understanding that numbers represent quantities. Because math is linear, a child who doesn’t learn one math concept will struggle with the tougher coursework to come. Middle schoolers can tackle Algebra 1 — but only if the building blocks of strong math curricula and instruction are in place to help them master previous math knowledge. This also points to the reality that many teachers lack the subject-matter competency needed to teach math properly in the first place.

It will take many steps to help all of our kids get the comprehensive college preparatory curricula they need to succeed once they head to higher education and the adult world. As reformers have learned all too well in the effort to provide algebra to all middle-schoolers, simply mandating districts to provide it to all kids isn’t enough.

The effort to implement Common Core reading and math standards in 45 states and the District of Columbia is a key step to giving all kids the knowledge they deserve. Expanding AP and International Baccalaureate programs at the high school (and even middle school levels) would also help.

At the same time, ending the gatekeeping of gifted-and-talented programs, along with expanding high-quality school options (including intra-district and interdistrict options as well as charter schools and vouchers) would also help. States must also continue revamping school data systems so that families can be informed about the array of coursework their kids need; reformers also need to launch and support outfits such as GreatSchools.org as well as launch parent data centers similar to initiatives such as the Connecticut Parents Union’s Parent Express Bus.

Meanwhile we must change mindsets about the capacity of our poor and minority children to succeed. As Andrew Hacker demonstrated last year, there are still too many people — especially those within districts and schools — who think that only some kids need and deserve comprehensive college-preparatory curricula. Forget the fact that economic and social prospects are bleak for high school dropouts and even those high school graduates without some form of college education –and the communities in which they live — especially in an age in their low levels of reading, math, and science proficiency renders them unfit to take on high-paying knowledge-based white- and blue-collar jobs. The reality is that when all children are provided college-preparatory curricula, they gain the nurturing challenge they need and want. As California State University, Fullerton psychologist Allen W. Gottfried has noted, the earlier children get into math courses and succeed in mastering computations and equations, the more-likely they will take on new challenges in other subjects.

All children should be provided Algebra 1. And they deserve the high-quality education that builds them up to be adults who can write their own stories.

The Dropout Nation Podcast: Be Fathers for School Reform