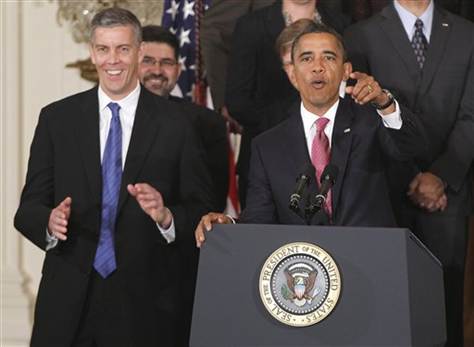 Barack Obama and Arne Duncan keep up a gambit that hurts the futures of children.

As Dropout Nation readers know by now, there are myriad problems with the Obama Administration’s effort to eviscerate the No Child Left Behind Act and its accountability provisions. One of them is that the administration approves waiver requests in spite of concerns raised by the very peer review panels it has put into place to vet the plans. Since it began the effort two years ago, the Obama Administration has approved waivers for states such as New York in spite of concerns from reviewers that the state didn’t show that it consulted with American Indian tribes and communities; granted the District of Columbia a waiver in spite of concerns that its transition plan to embrace Common Core math and reading standards was not “realistic and of high quality” (as well as lacked a “high-quality plan” for ensuring that English Language Learners and special ed students could get strong, comprehensive, college-preparatory curricula); and approved Georgia’s waiver requests in spite of complaints that it didn’t incorporate graduation rates for poor and minority students into its new accountability system (and thus allowing for a school to “earn a high CCRPI with low graduation rates for some subgroups”). This issue, along with the overall sloppiness of the administration’s effort and the fact that the entire gambit eviscerates the very tools that have helped launch a decade of successful reforms, should be more than enough for both Republicans and Democrats in Congress to shut down this thoughtless bit of policymaking that hurts the futures of children.

So it isn’t shocking that the Obama Administration moved last week to approve waiver requests from Alaska, Hawaii, and West Virginia without addressing concerns from peer review panels about aspects of their plans. School reformers, especially centrist Democrats (whose impatience with the long-delayed reauthorization of No Child led to this gambit in the first place) should call out President Barack Obama and U.S. Secretary of Education Arne Duncan for this latest episode of shoddy policymaking.

Take Alaska’s waiver plan. Peer reviewers were concerned that the state education department didn’t provide “sufficient evidence” that it vetted its plan with families, teachers, and others; one Webinar on the proposed waiver request held by the state last year, was only attended by 25 participants “and it is not clear how many were educators”. Despite the concerns, the administration apparently didn’t ask Alaska to either provide additional evidence that it sought input or actually hold new meetings to meet peer reviewers’ demands. The administration also didn’t deal with concerns from peer reviewers that West Virginia offered no evidence that it modified any aspect of its plans based on public concerns. Certainly it is possible that families, teachers, and the Mountaineer State’s National Education Association and American Federation of Teachers affiliates wholeheartedly supported all aspects of the state’s plan. But the state didn’t demonstrate it in its waiver plan, and the Obama Administration seems to have not bothered to deal with the matter.

Another concern from peer reviewers ignored the Obama Administration was with how each state was implementing the college- and career-ready curricula standards that it promised to provide all children. This was especially problematic in the case of Alaska, whose previous reading, math, and science standards were lowly-rated by the Thomas B. Fordham Institute (and were among the nation’s lowest to boot). Peer reviewers were concerned that Alaska didn’t have a clear timeline for implementing its standards; while it is likely that the effort would be completed by 2015-2016 — or just when the waiver expires — it may be completed even later than that. More importantly, the peer review panel were rightfully skeptical that the standards, which the state argues is based on Common Core reading and math standards being implemented in 45 other states along with D.C., actually meet the high bar set by the latter standards; while the University of Alaska is reviewing the state standards, the vetting wasn’t completed at the time the waiver request was submitted. The fact that the Obama Administration approved the Last Frontier’s waiver request in spite of those concerns once again hits upon another problem with the entire waiver gambit: That a state can call any sort of standards “college and career-ready” and the administration can’t do anything about it because it is prohibited by law from doing so.

Then there were concerns from peer reviewers that West Virginia’s implementation of Common Core involved plenty of activity, but no “strategic implementation and/or theory of action”. This was especially problematic in the area of professional development for teachers — many of whom are unlikely to have the subject-matter competency needed to do the job of teaching kids to the new standards in the first place — which the peer review noted involved plenty of “opportunities”, but was not exactly a “coherent approach”. The Mountaineer State didn’t address those concerns in its approved waiver, likely because Obama Administration officials didn’t press it to do so.

Meanwhile the Obama Administration didn’t force Alaska, Hawaii, or West Virginia to address peer review concerns about the new accountability systems each is putting into place. For example, peer reviewers complained that West Virginia’s accountability index used a multiplier that can make a school or district appear to be better-performing than it really is; in particular, a school could boost its rating by one-quarter of a standard deviation just by improving its performance from the 49th percentile to the 53rd percentile, could get a multiplier that boosts its rating by one quarter of a standard deviation. Wrote the reviewers: “[West Virginia] does not provide a rationale for awarding large changes in the multiplier.” West Virginia also didn’t make clear whether it included graduation rates for poor and minority students as part of its measurement of school and district performance. None of those concerns were addressed by the state in its approved waiver; the Obama Administration apparently didn’t press West Virginia on concerns from peer reviewers that its annual measurable objectives were not geared toward holding districts and schools accountable for improving student proficiency.

Meanwhile peer reviewers were also concerned that Hawaii’s move to give equal waiting to middle-class students and those lumped into its “high-needs subgroup” — a version of the super-subgroup subterfuge used by other states that includes English Language Learners, children condemned to special ed ghettos, and poor students — could obscure how poorly districts and schools are doing in helping the latter achieve success; a school in Maui could do poorly in improving achievement of poor kids in its classrooms and still get a high rating. Based on Dropout Nation‘s review of the approved waiver, the concerns were not addressed.

Simply put, it appears once again that the Obama Administration merely rubber-stamped the waiver plans. It also appears that the administration didn’t bother learning from past failings, including its approval last year of Virginia’s Plessy v. Ferguson-like proficiency targets for poor and minority kids (which embarrassed the administration right in the midst of President Obama’s re-election campaign). This isn’t surprising. As Duncan made clear during his appearance this past March before the Senate Health Education Labor and Pensions Committee, the administration would rather spin the administration’s efforts as a solution for No Child’s supposedly “broken” accountability measures than to admit that the entire effort allows states to ignore poor and minority kids, rendering them invisible altogether. The fact that the administration admits its granting waivers to states such as Oregon even when they haven’t put promised teacher evaluation reforms in place (and knowing that those plans could be scuttled by opposition from NEA and AFT affiliates) also shows how it conducts its policymaking in an irresponsible manner.

The administration’s failings, in turn, have been aided and abetted by reformers — especially centrist Democrats who have championed the waiver gambit — who have largely been silent about the flaws with the process and unwilling to admit to the consequences. Especially among reformers working out of the Beltway, there has been a rather inexcusable failure to remember that education policymaking is more than about setting laws and targets. It is also about a clear communication in action of the expectations we have for our society to ensure that every child is provided high-quality education. How the Obama administration and Congress engage in such policymaking is as important to these goals as the actual results themselves. When one looks at the No Child waiver process in full, it is clear that the Obama administration has engaged in the kind of inexcusable policymaking reformers would never tolerate from traditionalists. And now, as states such as New York are struggling to implement the teacher evaluation reforms promised under the waiver, and more evidence accrues about the negative impacts of the waiver gambit on efforts to systemically reform American public education, the silence among reformers is just plain cowardice.

Reformers still have time to step up and demand that the Obama Administration ends this reckless policymaking activity. It should have either leave No Child alone or just focus on reauthorizing a more-comprehensive version of No Child, as it should have been doing in the first place. Given that Senate Health Education Labor and Pensions Committee Chairman Tom Harkin is unveiling his proposed reauthorization plan next week, Duncan should reach out and do the latter.