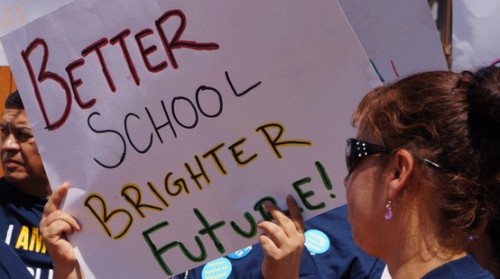 Certainly by now, there is no question that once-respectable education historian Diane Ravitch no longer deserves to be taken seriously. From her factual inaccuracies and logical misfires in her sophistry, to her effort this past December to politicize the massacre of 23 teachers and children at an elementary school in Connecticut, Ravitch continually discredits herself with every tweet and blog post. What has been questionable is how conservative reformers who were once her comrades in arms continue to give her any credence. The Thomas B. Fordham Institute, for example, gave Ravitch a prominent spot in its recent video on the 30th anniversary of the Reagan Administration’s release of A Nation at Risk, while leaving out others from poor and minority backgrounds who could give broader perspective on the issues brought to light by the report that remain today. Some rallied to Ravitch’s side two years ago, criticizing Kevin Carey for rightfully exposing her charlatanism  and honestly questioning whether her change of heart was related to her anger with former New York City chancellor Joel Klein over his decision to not hire partner, Mary Butz, for a post in the city’s department of education. As a result of their willingness to give her sophistry cover, Ravitch continues to be treated as if she deserves to be among more-respectable commentators on education policy issues. Too much credibility and respect is given to someone who has long ago lost both.

So it is nice to see that Rick Hess of the American Enterprise Institute finally offered some strong criticism of Ravitch for her latest bit of demagoguery, this time criticizing the families of children attending Los Angeles Unified School District’s Weigand Avenue Elementary School for successfully using California’s Parent Trigger law to oust Irma Cobian, the school’s principal, with the help of Parent Revolution. [Don’t worry: I will criticize Hess’ argument for a moratorium on implementing Common Core tests later this week.] From where Ravitch stood, the Weigand families and Parent Revolution wrongfully removed “an excellent principal” who was supposedly turning the school around; the families were, as far as Ravitch is concerned, dupes who helped the outfit “destroy schools and fine educators like Irma Cobian”. As you would expect, Ravitch had particular ire for Parent Revolution, which she called a “malevolent organization” which deserves “a special place in hell” for daring to help families become lead decision-makers in the schools their children attend; in another bit of demagoguery, Ravitch accused the outfit’s honcho, Ben Austin, of being a “loathsome”  person who “ruined the life of a good person for filthy lucre”.

As you would expect, Ravitch doesn’t get her facts straight. Between 2009-2010 and 2011-2012 — the bulk of Cobian’s four year-tenure running Weigand — the school only once met federal and state requirements for improving student achievement  — including those from black and Latino  backgrounds who make up the majority of enrollment. In fact the percentage of all Weigand students proficient in math declined from 61.6 percent in 2009-2010 to 43.7 percent in 2011-2012, according to data from the California Department of Education, while the percentage of all students proficient in reading declined from 38 percent to 35.4 percent in that same period. [Data for 2012-2013 is not yet available.] The fact that many of Weigand’s parents found Cobian to be rude and dismissive of them makes clear that there were clearly concerns about the tenor and effectiveness of her leadership style. It’s hard for anyone to be considered a high-quality teacher or school leader if they are unable to work respectfully with the mothers and fathers whose children you are entrusted with educating.

Hess rightfully calls Ravitch on the carpet for engaging in “vicious, Dante-esque hyperbole” that doesn’t actually address the underlying reasons for the decision the Weigand families made. As far as he is concerned, Ravitch’s “tirade” essentially stands in contrast to the fairly good-mannered approach Parent Revolution has undertaken in helping Weigand’s parents and other families looking to overhaul the failing schools their kids are forced to attend. From where he sits, Weigand’s families are perfectly within their rights to engage in the same kind of leadership hiring and firing that boards and shareholders in other organizations inside and out of education do every day in order to turn things around.

Meanwhile Hess actually shows respect for the decisions made by Weigand’s families when he complains that Ravitch didn’t take the opportunity to offer an honest and thoughtful critique of whether they were taking the right approach to turning the school around in the first place. Given what Ravitch has displayed over the past couple of years, it’s rather vain to expect her to undertake such an endeavor. But Hess is right in arguing that Ravitch should have at least attempted to address what is a legitimate question. Sure, one can argue as I do that the Weigand families would have been better off petitioning to take full control of the school from L.A. Unified instead of merely choosing to fire Cobian; after all, it is the district’s failures on the teacher quality, school leadership, and curricula delivery fronts that are the long-term culprits of Weigand’s problems. At the same time, one must also admit as I do that this is a situation in which the Weigand families may have been making the decision they think makes sense given the issues on the ground.

For Ravitch to engage in such an exercise, she would first have to actually believe that families have the right to make educational decisions for their children as well as for the school communities their kids must attend. It also means trusting and accepting that families are making the best decisions for their kids and schools in light of the challenges they surmise. It means allowing families to take the responsibility for the consequences of their decisions that are implicit in undertaking Parent Trigger efforts in particular (as well as for Parent Power efforts in general). Finally, it means being willing to offer advise and guidance to those families so that they can make their decisions as well as learn from mistakes they (along with all of us) will inevitably make. Simply put, Ravitch would have to abandon the disdain she has expressed since her first book,he Great School Wars: A history of New York City schools, for families playing powerful roles in education. And that’s not going to happen.

The good news is that at least one conservative reformer has finally given Ravitch the business for her shoddy sophistry. It would be nice to see others do the same.