The Chicago School Closings: A Time to Move Beyond the Traditional District Model

RiShawn Biddle
Comments Off on The Chicago School Closings: A Time to Move Beyond the Traditional District Model 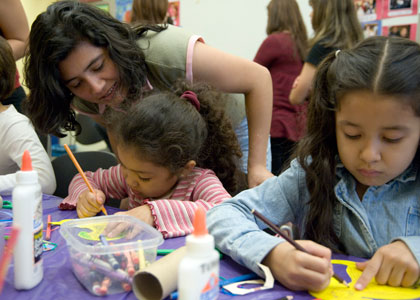 What Chicago’s children need now is the expansion of high-quality school choices.

As you would expect, the American Federation of Teachers’ Chicago local and other traditionalists are none too pleased by Chicago Public Schools’ decision to formally shut down 49 of its underutilized schools. Karen Lewis, the notoriously bellicose head of the AFT local, the Chicago Teachers Union, declared in a press released earlier this afternoon that the decision has led to a ” day of mourning for the children of Chicago” and promises to follow up on her threat to recruit someone to run against Mayor Rahm Emanuel when he comes up for re-election two years from now. Others such as national AFT President Randi Weingarten and MSNBC commentator Jeff Johnson have embraced the Chicago AFT’s talking point that the Second City district’s school shutdowns will lead to more children being murdered and endangered because some will have to go through more-dangerous neighborhoods in the city just to attend new schools. Meanwhile traditionalists in the Second City continue to grasp upon an analysis by public radio outlet WBEZ-FM that shows that black children account for 88 percent of the schools that were targeted back in March for closure (despite making up two-fifths of enrollment) to declare that the district is essentially engaged in racial bigotry. The Chicago AFT, in particular, attempted to argue this in two federal lawsuits it is financing aimed at stopping the district from closing the schools. [For some inexplicable reason, a hearing on both suits will be held in July.]

Of course, Lewis, Weingarten and others fail to mention a few things. The first? That keeping schools open in itself won’t do anything immediately to address crime and violence outside its doors. The two decade long overhaul of the district undertaken by Mayor Rahm Emanuel and predecessor Richard M. Daley is slowly working to address the dropout crisis that is a long-term culprit in spurring crime in the city; schools can also play a role in economic renewal. But it cannot immediately address problems that are largely due to the Second City’s failures to embrace the Broken Windows approach to fighting crime that has made even New York City a much-safer place to live — a failing for which Emanuel should be held accountable (and one his predecessor never did as much as he could have to address) — and the gang activity fueled by the nation’s longstanding (and failed) prohibition on narcotics and marijuana. [Let’s also keep in mind that even with Emanuel and Daley fils not embracing more-aggressive crime-fighting tactics, the Second City is far less violent than it was two decades ago; the number of reported homicides declined by 53 percent between 1999 and 2010, according to Dropout Nation‘s analysis of U.S. Bureau of Justice Statistics data.]

Meanwhile the argument that children attending soon-to-be closed may end up attending schools in more-violent areas fails to consider this fact: Some of the schools being closed are in some of Chicago’s most-violent neighborhoods, which means that children who attend school there are already endangered before and after they leave school buildings.  Seventy-nine incidents — including battery, assault, and burglary — were reported between May 2012 and May 2013 in the neighborhood home to the soon-to-be shuttered Yale Elementary School on Princeton Avenue and West 70th Street, according to Dropout Nation‘s analysis of crime data provided by the city. Around Attucks Elementary on East 51st and South State Street, there were 37 incidents within the past year — including nine incidents around the school building itself. One would take the arguments of Lewis and others seriously if they were calling upon Emanuel to revamp how the city addresses crime and other quality of life issues — including hiring more police officers to patrol neighborhoods on the South Side of town. But then, such demands from the Chicago AFT would mean that the city would not provide raises to its rank-and-file, which then means less money and influence for the union and its national parent.

As for the matter of race? The inconvenient fact is that black students are the ones most-affected by the shutdowns because they live in neighborhoods that have been contracting for some time. The fact that the district mostly serves black and Latino children, with white children making up just 9 percent of enrollment, doesn’t factor into traditionalist thinking. More importantly, black families — especially those in the middle class — are walking away from Chicago schools. Just 173,173 black children attended Chicago’s schools in 2010-2011, a 26 percent decline over enrollment for black students in 1991-1992, and according to data from the U.S. Department of Education; in fact, that decline — along with a 56 percent increase in the number of Latino kids attending Chicago schools in that same period — means that black children no longer make up the majority of enrollment.

Chicago can’t keep open 50 school buildings if there aren’t enough kids attending them — and it definitely can’t keep 280 additional underutilized buildings open for long. It definitely can’t do so when it also faces a budget deficit of at least $600 million for the current fiscal year, which, along with a looming deficit of $1 billion, is forcing the district to finally take action to shut down half-empty schools. There’s also its defined-benefit pension deficit, which is officially reported as being $8 billion for 2012, but more-likely to be $11 billion, according to Dropout Nation‘s analysis of financial data using a formula developed by Moody’s Investors Service. The Chicago AFT, along with its allies, shares in the blame for these woes. After all, the union continues to embrace an old-school industrial union model that ignores both its consequences to children, younger teachers, and taxpayers alike; since the union also controls seats on the pension, it is also responsible for its fiscal mess.

Meanwhile all the carping over the school closings ignore the fact that Chicago, like its counterparts in Philadelphia and Washington, D.C.,  is struggling with the same problems of overemphasis on scale over quality and choice that is inextricably linked with the traditional district model. Certainly Chicago is a better-performing district academically than it was two decades ago; the percentage of functionally illiterate fourth-graders declined from 60 percent to 52 percent between 2003 and 2011, according to the National Assessment of Educational Progress, while the percentage of students reading at Proficient and Advanced levels increased from 14 percent to 18 percent during that time. But middle class families of all backgrounds are no longer willing to wait for the district to improve further and are willing to leave for suburbia in the hopes of sending their kids to district schools that turn out to be merely mediocre. It is why two out of every five kids born in the city in 2005 did not attend kindergarten in traditional district schools five years later.

For poor and lower middle class families — including those from Latino backgrounds who are increasingly becoming the face of the Second City — the district’s struggles with underutilized buildings and battles with the bellicose Chicago AFT — also makes it difficult for them to access any options, much less those of high quality. The school closings, necessary as they may be, force these families to send their kids to schools outside of their neighborhoods. The district’s Zip Code Education policies — which lead to 37,000 seats in the district’s best-performing schools to go unfilled — are especially galling. Meanwhile last year’s strike by the Chicago AFT was a particularly nasty reminder to them that they are beholden to the union’s antics unless they are one of the few who send their kids to the 119 charter schools in the city (or can access enough money to send their kids to private or parochial schools).The fact that the Chicago AFT has engaged in rank demagoguery against charter school operators meeting the needs of families even as its rank-and-file enthusiastically embraces choice (39 percent of Chicago teachers sent their kids to private schools, according to the Thomas B. Fordham Institute in a 2004 report, a number that has likely increased since then), is especially blood boiling.

What all of Chicago’s families need now is a wide array of high-quality school options both within and outside their neighborhoods. This is where Emanuel must step up on their behalf. He should immediately move to eliminate the district’s school zones, which would open up those 37,000 seats. Emanuel should also build upon predecessor Daley’s Renaissance 2010 initiative to launch new charter schools in the city. This includes teaming with major charter school operators such as KIPP, as well as teaming up with outfits such as the Black Star Project (which already provides tutoring to kids in the city) to launch new charters in the neighborhoods affected by the school closings; the current plan to authorize 17 new charters is not even close to enough, but either for the affected neighborhoods or for those in the city’s North Side, where overcrowded schools (and the district’s inability to meet demand) is the norm.

Chicago should also lease space in the soon-to-be-shuttered district schools, embracing the space sharing approach pioneered by New York City in bringing charters to Harlem and other communities. Enacting a Parent Trigger rule that would allow families to take control of — and overhaul — failing schools that remain open is also an important step to expanding choice within neighborhoods.

Emanuel can go even further by fostering the development of blended learning by outfits such as Rocketship Education, and DIY education efforts by families, churches, and community groups in the city. The latter, in particular, would help Emanuel build bridges with those who legitimately feel that the city hasn’t fully considered the impact of the shutdowns on their neighborhoods. It would also put the Chicago AFT on the defensive; after all, it will be harder for Lewis to claim that her union is engaged in social change when the union opposed the expansion of school operations by the very people she claims she cares about.

The time is now for Chicago to move beyond school shutdowns — and away from the traditional district model. It is the only way all of our kids in the Second City will have the good and great schools they deserve.

AEI's No Child Report: Not Nearly As Helpful As It Could Be for Informing Systemic Reform