Andres Alonso’s Departure: An Opportunity for Baltimore to Move Beyond the Traditional District

RiShawn Biddle
3 Comments on Andres Alonso’s Departure: An Opportunity for Baltimore to Move Beyond the Traditional District 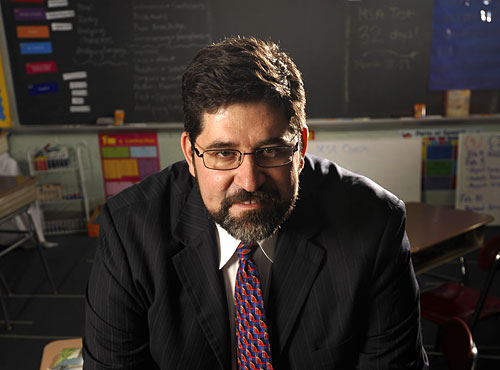 School reformers in Baltimore, along with those in the city looking to keep the city from becoming the next Detroit, can’t help but be pensive about yesterday’s news that Andres Alonso is departing as chief executive officer of its traditional district to take a gig at Harvard University’s education school. For most of the past six years, the former special ed teacher and protégé of former New York City chancellor Joe Klein has won national acclaim for his efforts to overhaul the district. This has included successfully pushing the American Federation of Teachers local to agree on including student performance data in teacher evaluations, reduce the overuse of suspensions and expulsions that help put far too many kids on the path to dropping out (and fail to address the illiteracy and academic struggles that lead kids to act out in the first place), firing three-quarters of the principals who were on staff when he took the job in 2007, and launching an intra-district school choice effort for middle schoolers and high school students.

Alonso has also garnered acclaim for his efforts to improve how Baltimore serves the young black and Latino men who make up 44 percent of its enrollment. Over the past few years, the district launched two all-male schools as well as garnered support from George Soros’ Open Society Foundations for a project that used art to address the effects of low-quality education on young black men. He also proved to be the rare school leader willing to publicly expose test-cheating by three schools and hold principals accountable for the fraud. He particularly showed backbone last year when he proceeded to fire two principals whose schools were engaged in test cheating over the objection of the the American Federation of School Administrators affiliate. And Alonso managed to achieve some decentralization through his Fair Student Funding weighted student finance effort, which put 80 percent of the district’s budget into the hands of principals on the ground. Although the district has been criticized by Maryland’s Office of Legislative Audits for problems such as failing to collect $1.9 million in debts owed to it since 2009, Alonso has generally managed the district’s operations well.

Given the woes still facing the Baltimore district —  and the possibility of Maryland Gov. Martin O’Malley handing back majority control of the state-controlled school system to the generally inept city government — one can’t be blamed for fearing that Alonso will be succeeded by someone who can’t keep the overhaul going. Yet the worries about who will replace Alonso ignore the fact that Baltimore hasn’t made nearly as much progress in improving the quality of teaching and curricula under his watch as publicly perceived. More importantly, Alonso’s Departure — and the work he has done in decentralizing district operations – – offers reformers an opportunity to finally move away from a traditional district model that would be ineffective in helping students succeed no matter who sits in the top executive’s seat.

Certainly in some respects, Alonso’s work has reaped promising results. Baltimore’s five-year promoting power rate (based on eighth-grade enrollment) increased from 70 percent for the Class of 2007 to 80 percent for the Class of 2011, according to Dropout Nation‘s analysis of data from the U.S. Department of Education. The percentage of Baltimore fourth-graders performing Below Basic in math (as measured on the National Assessment of Educational Progress) declined from 36 percent to 32 percent between 2009 and 2011. Out of school suspensions declined by 27 percent between 2006 and 2009 (the most recent years available), based on DN analysis of civil rights data collected by the U.S. Department of Data. The number of high school students taking Advanced Placement, courses, still abysmal by any measure, doubled between 2007-2008 and 2010-2011.

Baltimore has done an especially poor job in improving academic achievement of young black men in its care. Sixty-nine percent of young black male fourth-graders eligible for subsidized school lunch read Below Basic in 20011, a two percentage point increase over 2009; it keeps its place as the seventh-worst big city district in literacy for young black men in fourth-grade (after Cleveland, Milwaukee, Detroit, D.C. Public Schools, Fresno, Philadelphia, and Los Angeles). It only managed to bring down the number of eighth-grade young black men reading Below Basic declined by two percentage points between 2009 and 2011, a level of decline lower than that for six other cities, including Detroit (which decreased the percentage of eighth-grade young men who were functionally illiterate by 10 percentage points). Baltimore can’t claim any real success until it improves literacy instruction for young black men.

So Alonso didn’t accomplish nearly as much as he could have in improving student achievement. But given the straits Baltimore was in when he arrived six years ago (including having embarrassed itself by submitting an error-ridden budget), he couldn’t get to everything. More importantly, it is hard to believe that he could accomplish more given the changes in the political landscape he was facing. It isn’t just about upcoming negotiations with the AFT local over the current contract, which expires this year. The district’s board, criticized for bending to Alonso’s will far too often, would likely have pushed to weaken his hand in order to keep up appearances. Baltimore Mayor Stephanie Rawlings-Blake, looking to bring control of the district into city hands (and gain some of the authority over education gained this year by Prince George’s County Executive Rushern Baker), would have likely pushed the board members she appoints to make Alonso’s life a lot less charmed. While Rawlings-Blake and Alonso have worked well in the past, her own ambitions (which likely include running for governor) and penchant for power grabs probably factored as much into Alonso’s decisions as the likely peace that will come with a Harvard faculty spot.

These realities are reminders of another reason why it is so hard to overhaul districts — and why the traditional district model has become obsolete: The inherent instability that comes with being a chief executive of a traditional district. Big city district bosses wear out their welcome after three or four years largely because they lack the political constituencies within districts to sustain their tenures. [Top bosses in smaller suburbia and rural districts tend to hold their jobs a couple of years longer.] This fact, along with the challenges that come with confronting the toxic cultures that often pervade failing districts, explains why district turnarounds are so difficult to sustain. That Alonso managed to last as Baltimore’s top boss for so long is a testament to the structure of the district’s board (which, because Maryland’s governor and the city’s mayor appoint all but one of the board seats) is more akin to the mayoral control arrangement that has made overhauls of New York City, Boston, Chicago go more successfully than to that of traditional districts, whose boards are elected, and thus, are under the influence of AFT and National Education Association affiliates. But based on O’Malley’s comments as of late, it may not last long enough for Alonso’s successor.

This is a particular problem because Baltimore’s main city government is a mess. Rawlings-Blake has garnered well-deserved praise for tackling the city’s long-term economic woes — including the roll-out last month of a modest pension reform plan that features moving new civil servants to hybrid retirement plans that feature aspects of defined-contribution accounts. [Your editor suggests that districts and states do something similar and yet, more radical, on this week’s Dropout Nation Podcast.] But she has also criticized for such moves as refusing to hand over the e-mails of Rico Singleton, the city’s former information technology director who resigned last year after it was revealed that he had helped a girlfriend get a job for a vendor while he was a top official with New York City’s IT office. Rawlings-Blakes’ support for continuing the city’s three decades-long giveaways of tax abatements to developers for real estate projects that rarely work out  — an underlying reason why Baltimore is in such dire fiscal straits — doesn’t help matters either. Meanwhile the city’s municipal leaders have not been attentive to the quality-of-life issues most prominent on the minds of residents; unlike other big cities, Baltimore’s homicide rate has increased by 30 percent over the past five years. Considering how poorly the Baltimore district fared under mayoral control, merging it back into the rest of city government doesn’t make sense.

What does make sense is for Baltimore to abandon the traditional district model altogether. Alonso already started on that path with his push to hand over school budget decisions to principals. School funding is already voucherized in a way through the district in the form of its weighted student funding plan, which allots a base amount of funds for each student, then adds more dollars for each kid depending on their learning needs. Spinning off existing Baltimore district schools to communities, Parent Power groups, and charter school operators would be the sensible thing to do. The district can simply serve as a provider of services to the schools, including leasing buildings — of which it will have plenty thanks to the efforts of Alonso to get $1 billion in funding to renovate existing schools and replace aging buildings with new ones.

Another key step would be to provide families in B’more with high-quality school choices. This starts with expanding the number of charter schools in the city. The number of children attending Baltimore’s charter schools increased by 45 percent between 2010-2011 and 2012-2013, according to the National Alliance for Public Charter Schools in its annual report on market share. Still, just 15 percent of children attend charters largely because the district is charged with deciding whether charters can open within the city limits. This is akin to allowing McDonald’s decide whether a Wendy’s or Five Guys can open next door, restricting the growth of high-quality options. Maryland should hand over charter school authorizing either in the hands of an independent agency at the state level or grant authorizing power to independent organizations in the city, including Johns Hopkins University and the University of Maryland. A school voucher program should also be launched; but given that Maryland is a Democrat-dominated state, this isn’t likely.

As the Andres Alonso era comes to an end in Baltimore, it is also time to close the chapter on the traditional district model. The city’s children would be better for it.