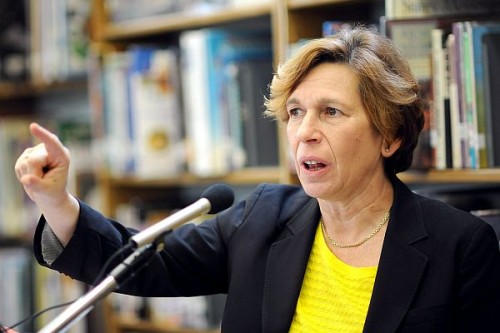 Photo courtesy of the Daily News.

There are plenty of reasons why it is time to ditch defined-benefit pensions (as well as the rest of traditional teacher compensation) — and not just because of the at least $1.1 trillion in long-term deficits (including unfunded retired healthcare benefits often handled by state pension systems) that are being borne by taxpayers and the nation as a whole. One of them lies with the fact that the political power inherent in pension systems (including the ability to sway boards of publicly-held companies, as well as the role they play in picking money managers) allow for those who sit on their boards to engage in mischief that hurts markets and taxpayers alike; this includes requiring pensions to invest funds in alternative energy schemes that won’t ever pan out. This is especially true when board seats are held by leaders of National Education Association and American Federation of Teachers affiliates looking for any way to defend their ever-declining influence in education policy.

So your editor wasn’t surprised when the national AFT released what it called a “Retirement Security Report” earlier this week targeting money managers who happen to also be among key players in the school reform movement. Among the targets: Index fund investing pioneer Dimensional Fund Advisers (because one of its cofounders — who no longer runs the organization’s day-to-day operations — heads up Missouri’s Show-Me State Institute, a key player in advancing systemic reform in the Midwest); the investment firm Gilder, Gagnon, whose cofounder is chairman emeritus of the Manhattan Institute, a longstanding critic of the AFT and education traditionalists in general; and SLX Capital, whose foundation also donated to the conservative think tank. And, of course, Eagle Capital Management, whose boss, Ravenel Boykin Curry, is on the board of Manhattan Institute as well; his son, R. Boykin Curry Jr., cofounded (with Kevin Chavous and Whitney Tilson) Democrats for Education Reform, which has helped reduce the AFT’s and NEA’s influence over Democratic Party politics at the national level.

But many of the firms that are the targets of the AFT’s ire are those whose top executives are donors to StudentsFirst, the school reform outfit founded by Michelle Rhee, a longtime foe of Rhonda Weingarten, the AFT’s clever and often disingenuous national president. There’s Appaloosa Management, whose boss, David Tepper, has helped fund StudentsFirst as well as Better Education for Kids, the New Jersey-based outfit run by new generation civil rights activist Derrell Bradford; and Third Point Capital, whose founder, Dan Loeb, has garnered ire from the AFT and progressives the union has co-opted for serving as a board member of StudentsFirst’s New York State affiliate. Legendary investor Paul Tudor Jones’ semi-eponymous outfit is also on the list because of his role in supporting StudentsFirst, as is the famed SAC Capital, whose managing director, Michael Sullivan, is also a StudentsFirst supporter. And let’s not forget Tiger Management, whose renowned founder, Julian Robinson, is one of the foremost financiers of the school reform movement (and whose son is a charter school operator); Tiger is on the list because of Robinson’s support for Rhee’s outfit.

Then there’s Elliott Management, which ended up on the list because the firm employs Dan Senor, the longtime Republican political strategist who also serves on StudentsFirst’s New York branch. [Elliott’s chief executive, Paul Singer, also happens to chair the board of the Manhattan Institute; boy, is Weingarten obsessed.] Senor has apparently found a special place on Weingarten’s enemy list. For good reason. Senor’s wife, Campbell Brown, was the target of Weingarten’s ire (as well as the “blood libel” slur” by one of Weingarten’s henchmen, Albert Shanker Institute Executive Director Leo Casey, for which he has never apologized directly to Brown) after Brown criticized the union for aiding and abetting criminally abusive teachers within the union’s rank-and-file. The entire episode once again proved lie to Weingarten’s effort to co-opt school reformers by portraying the union as being more-willing to accede on some aspects of reform. And Randi doesn’t take kindly to public embarrassment.

The argument the AFT advances for putting together this list is that these money managers endanger the futures of “working families’ by supporting the very systemic reforms that will help them — including overhauling how we fund retirements for good and great teachers who deserve better than hoping against hope that they will earn annuities from busted pensions — that also happen to be counter to the AFT’s own interests. Yet the report itself leaves out outfits such as Caxton Associates (whose cofounder, Bruce Kovner, sits on the board of the American Enterprise Institute, home to Rick Hess and his team of reformers), or a number of other reform philanthropists who run money management firms.

The reality is that donors to StudentsFirst account for 13 of the 33 names on the list; Manhattan Institute donors accounts for another 17. It seems like Randi has been keeping a handwritten list of longstanding enemies on her desk since her days heading up the AFT’s Big Apple Affiliate, then handed off to one of the AFTs public relations staffers when she thought it was time to get revenge. Lovely. You have to thank the Wall Street Journal for making this entire list publicly available. At the very least, reformers looking for more cash now have a list of potential donors to hit up. Among other things.

The AFT’s effort to advise (or, more appropriately, give marching orders to) pension board members — especially those who report directly to the union’s state affiliates — would be useful if it at least attempted to serve as a warning to pension systems about the consequences of using inflated rates of returns on their investments of as much as eight percent when actual rates of return of the Standard & Poor’s 500 index was only around four percent during the last decade (and often, even lower for many pensions). It would have also been somewhat useful if it attempted to steer pensions away from risky hedge fund investments whose risks can prove to be too great for either taxpayers or teachers to bear.

The report could have at least mentioned the new formula developed by Moody’s Investors Service for uncovering the true level of teachers’ pension (and other defined-benefit pension) underfunding — which Dropout Nation has used to reveal that pensions such as those of Chicago are in worse shape than admitted. [The board of Chicago’s teachers’ pension, by the way, is dominated by the AFT; the pension’s board president, Jay Rehak and number two Lois Ashford are members of the C.O.R.E coalition led by Chicago AFT boss Karen Lewis.] The union could have even suggested that states move toward a defined-contribution system with states and districts paying a guaranteed rate of contribution so that younger teachers, who now make up the majority of teachers in its rank-and-file, are no longer taking the proverbial hit because they may not stay in the profession long enough to reap the full retirement benefits for which they have worked.

Given that the AFT, along with the NEA, have been complicit in perpetuating pension deficits, both through the roles played by their leaders in running pensions as well as in negotiating deals with states and districts that led to teachers not paying enough toward their own retirements (and have allowed states and districts to offer overly generous benefits they couldn’t ever fully fund), one can’t expect the union to do anything that actually does well by the teachers they claim to represent and by children for which the union proclaims its care. But at least Weingarten could been cleverer in developing her enemies list. At least this can be said: Weingarten has given reformers more reason to continue pushing for the overhaul of traditional teacher compensation systems that no longer work for anyone other than herself and her fellow union leaders.

The Dropout Nation Podcast: Build Civilizations of Love for Our Children