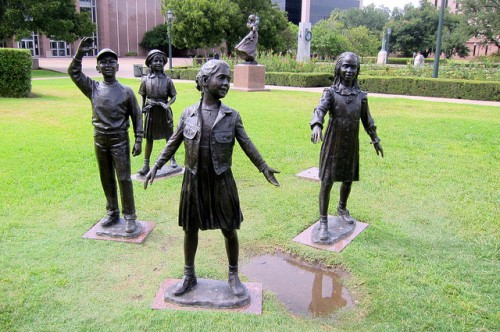 Thanks to the work of governors, business leaders, and others, Texas has become a model of how to embrace — and largely succeed — in systemic reform. But within the past year, complaints about a new battery of end-of-course tests geared toward helping more kids succeed in school and life — including stemming achievement gaps — along with other issues, has led the state legislature to take up House Bill 5, which would essentially weaken those efforts. The likely consequences of the proposed law — including the weakening of standards for high school graduation and the creation of alternative diplomas not worth the paper upon which they would be written — will be borne by children, especially those from the very minority households who already make up the majority of students in Lone Star State schools. Simply put, H.B. 5 brings back the soft bigotry of low expectations that the Lone Star State has long fought against.

In this Voices of the Dropout Nation, Bill Hammond, President and CEO of the Texas Association of Businesses, explains why the Lone Star State’s legislature (along with traditionalists and others) are embracing policies that will damage both the futures of children — especially those from poor and minority backgrounds — as well as hurt the state’s long term economic growth. Read, consider, and take action.

Why is the Texas House of Representatives determined to weaken high school graduation requirements? The Foundation Diploma, which allows students to select one of four paths to graduation that is being created in H.B. 5, not only weakens graduation requirements, no longer making students take Algebra II or advanced science courses. Simply stated it will erase the progress we have made in Texas closing the gaps between student groups.

From the time that Texas created its current graduation requirements, called the Recommended Plan, high school graduation rates have increased and the performance gap between white students, minority students and the economically disadvantaged has shrunk. How can the argument be made that tougher standards lead to higher dropout rates? Since Texas started requiring students take tougher classes to graduate, dropout rates have gone down. Yet, in light of this fact, during the debate on the House floor, Representatives actually said that pushing our students will actually cause them to give up. While that argument may sound reasonable and valid, the numbers just don’t back it up.

A letter sent to lawmakers from the National Council of La Raza and The Education Trust begged them not to weaken standards, saying that the Texas’ economy needs high-level workers to stay strong. It also points out that the changes set forth in H.B. 5 will hurt low income and minority students. That letter also pointed out the fact that too many of Texas’ students, especially African-American, Hispanic and low income students, will graduate unprepared for the future if this bill becomes law.

Low income and minority students are thriving in the current system, with those students making bigger gains than any other groups in graduating career and college ready. Can we do better? Yes, but we should not kill a system that is moving us in the direction that we want to go and replace it with a system that will throw us in the wrong direction.

Given the choice, will your children choose to take harder courses if those courses are no longer required to be considered for college admission? Currently, students must take the recommended curriculum to be considered for state college admission, but that will no longer be required under H.B. 5. If those tougher courses are no longer required, and parents aren’t encouraged to step in, it is likely that students will opt not to take them.

What about parental involvement? Parent groups support the changes in this bill even though it will mean less say for them in the classes that their children take. Right now, in order to get out of taking the recommended curriculum parents have to give their students permission, as current law requires them to be involved in that decision process. State Rep. Mark Strama tried to add an amendment to H.B. 5 that would have kept the current requirement in place and it was shot down by almost two-thirds of the House. Parents are being sold a bill of goods by the groups that supposedly represent their interests. Since when was less parental involvement in education a good thing for students?

There is also a big problem with the movement to eliminate almost every end of course exam at the high school level. Under our old system the exit level test was taken in a student’s junior year of high school. Under our current system end of course exams are required through a student’s entire high school career. Under the proposed system the final test a high school student would have to take would be in their sophomore year. Are we just going to throw away the last two years of high school and just hope students learn something? We must, at the very least, require standardized testing as a diagnostic tool past the tenth grade to ensure that our students are learning what they need to learn to be successful in the next phase of their lives.

Texas’ reputation for having the best business environment in this country is in danger. Severely weakening our graduation requirements and reducing the number of career or college ready graduates does nothing to create a skilled and educated workforce. While other states are raising the bar to equal what Texas has done for years, the Texas House is trying to move us in the wrong direction. Can you imagine what is going through the minds of leaders in other states as they salivate over the fact that Texas is giving them the perfect argument for businesses not to move here.