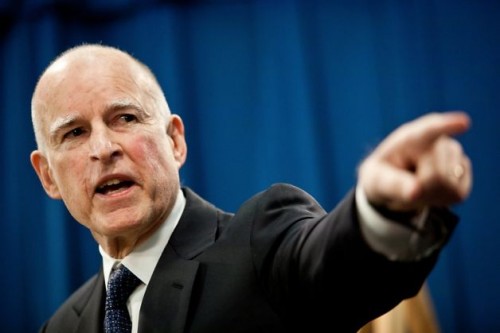 One thing can be said about the California Legislative Analyst’s Office recommendations on Wednesday to the legislature and once-and-future Gov. Jerry Brown that they finally face up to the virtual insolvency of the state’s Teachers Retirement System: At least it is actually trying to push a conversation that needs to be had. While Brown and Golden State legislators have spent the past two years nibbling around the edges of the problem — including the passage of Chapter 296, Statutes of 2012, which ends the ability of teachers to buy service credits used to bolster annuity payouts — neither have either meaningfully addressed the gargantuan teachers’ pension deficit or have been willing to fight with the National Education Association and American Federation of Teachers affiliates who have rendered both servile to their interests. This year, in fact, state officials have been engaged in a rather feckless conversation over whether to pick a plan offered by CalSTRS to whittle down the underfunding within the next 30 years or try to do so over the next three quarters of a century. None of the scenarios deals with the underlying causes of the pension deficit nor admit the reality that CalSTRS’ virtual insolvency is wrecking havoc both on the state’s fiscal condition and on the futures of children.

Yet in going with the official pension deficit numbers provided to it by CalSTRS, the LAO has ignored reports by Dropout Nation and others that the actual level of underfunding is likely far greater than reported. As your editor noted last month, CalSTRS’ official pension deficit of $64 billion (as of 2011, the latest year available) is based on an assumed rate of return of 7.5 percent, which is not only far higher than the growth in the Standard & Poor’s 500, but greater than the three-tenths of one percent rate of return that CalSTRS has actually experienced over the past five years. Even if one looks out over a decade, CalSTRS 10-year actual rate of return of 6.5 percent is still a percentage point lower than actuarial expected gains. Using the formula for analyzing pension underfunding developed by Moody’s Investors Service, which assumes a more-realistic 5.5 percent rate of return, CalSTRS’ pension deficit is $87 billion, or 36 percent higher than officially reported. This means that taxpayers would have to pay an additional $5.1 billion a year for the next 17 years just to make up the underfunding. This would be a near two-fold increase over the $5.8 billion taxpayers (through the state and districts, as well as the salaries they pay out to teachers) poured into the system in 2012. It is also more than the greater than the $4.5 billion CalSTRS says it needs to stay afloat.

This is one time LAO should have used the Moody’s formula and offered its own analysis. Why? Because it would provide to legislators as well as Brown a starker and clearer picture of how bad things truly are both for CalSTRS and the state as a whole. Without honest, transparent numbers, state officials can’t adequately tackle the underlying causes of the pension deficit — or overhaul teacher compensation in ways that benefit high-quality teachers and children alike — with smart solutions. And the woes of CalSTRS illustrate the need for thoughtful problem-solving.

\Certainly the generous benefits paid out by CalSTRS — including six-figure payouts to 6,609 teachers and school leaders, according to the California Foundation for Fiscal Responsibility’s database — is one underlying cause of the pension’s massive deficit. The average California teacher retiring last year could receive benefits equal to 60 percent of final year’s salary; 29 percent of CalSTRS 230,278 beneficiaries receive monthly benefits of $4,000 or more. Such generous deals is one reason why CalSTRS’ annuity payouts have more than doubled between 2003 and 2012. While Brown and the legislature moved last year to make it slightly harder for teachers and school leaders to attain such generous payouts, they haven’t taken tougher stances on reducing payouts. Some of this certainly has to do with NEA and AFT affiliates, which have worked hard to beat back any efforts at systemic reform especially in the area of overhauling teacher quality. Another problem lies with the fact that both the state government and districts have been able to increase teacher salaries (by 8.4 percent between 1999-2000 and 2011-2012, according to the U.S. Department of Education) without being forced to contribute more into the system in order to stem pension deficits. CalSTRS has no ability under state law to increase the amount districts and the state must pay in to reduce new insolvencies (or to address current ones).

The level of contributions, especially by the state and teachers, matters because it is another culprit in the pension’s virtual insolvency. As the LAO notes, Golden State officials, betting wrongly that equities would continually increase by double-digit clips during the late 1990s bull markets, reduced its contributions to the pension even as it bolstered annuity payouts to current and future teachers. Currently, the state provides just 24 percent of contributions into CalSTRS; it will ah  As for teachers? The 39 percent they contribute to CalSTRS is far lower than the 50-50 match required of private-sector counterparts into their own defined-contribution pensions. But as the LAO notes, requiring current teachers to contribute more to CalSTRS will be much harder to do because of court rulings that require the state government to provide current employees with higher pay and other benefits in exchange for such paying more toward its pension. While this fact provides legislators and Gov. Brown with an opportunity to ditch traditional teacher compensation by allowing them to develop alternatives to traditional degree- and seniority-based pay scales that they could label as better benefits, it is unlikely they will do so because it means confronting NEA and AFT affiliates that have rendered them servile.

These problems are compounded by CalSTRS’ own unwillingness to deal smartly with the insolvency. While it did move to reduce its assumed rate of return by a quarter of a percentage point, the 7.5 percent rate is still inflated, unrealistic, and hides the extent of its insolvency. But it is even worse than that. Because CalSTRS assumes a rate of return that isn’t even close to reality, it must pursue the kind of investing strategies that expose it to investment losses that cannot be overcome — and exposes taxpayers to unacceptable moral hazard. This already happened to CalSTRS with pension losses after the financial meltdown. But the pension still has too many many unacceptable investment vehicles in its portfolio. Investments in hedge funds and other forms of private equity funds — all of which are generally illiquid, or difficult to sell on the open market, unlike stocks and bonds — make up 15 percent of CalSTRS portfolio. When private equity funds do well, they do really well. But as seen in the financial meltdown, they can crap out just as easily, with the firms that run the funds often calling on the investors (including public pensions) to invest new money into the funds just to make up the difference. Certainly private equity investments make sense for sophisticated private-sector investors because their exposure to losses doesn’t damage the rest of the public (unless governments decide to bail them out). But CalSTRS and other teachers’ pensions have to be bailed out by taxpayers in such situations.

For Brown and the California legislature, it will take plenty of steps to finally move in the right direction on addressing CalSTRS’ fiscal morass. Requiring the pension to further adjust its assumed rate of return downward to 5.5 percent is a start; this may not make them happy because they will have to pay more into the pensions. But given that most of the tax increase garnered from last year’s passage of Prop. 30 is already geared toward the pension, there’s no point in avoiding the pain. Forcing CalSTRS to abandon private equity investments would also make sense, as would figuring out a way to legislatively require greater contributions by teachers, should also be done. And reducing generous payouts even to existing retirees just make sense. Certainly they will sue over the matter. But it no longer makes sense to offer generous payouts when the dollars aren’t there to provide them.

But in the long run, it is also time to overhaul traditional teacher compensation altogether. After all, the data has long ago shown that defined-benefit pensions and seniority-based pay scales do little in improving student achievement. More importantly, it is unfair to high-quality teachers, especially younger teachers, who don’t get immediate reward for their performance, have to wait 20 years or more to reap the full benefits, may not get the full benefits if they leave the profession (which is possible in an age in which one can change careers at least three times during their working lives), and must deal with laggard colleagues being paid equal pay for less-than-stellar work.

It is time for California state officials to address CalSTRS’ virtual insolvency in a thoughtful way. And their counterparts in other states should do the same.

Will Sequestration Keep Kids Out of Special Ed Ghettos? That Would Be a Good Thing