The Big Apple AFT’s Latest Disclosure: $72 Million in Pension and Other Retirement Deficits

Dropout Nation Editorial Board
2 Comments on The Big Apple AFT’s Latest Disclosure: $72 Million in Pension and Other Retirement Deficits 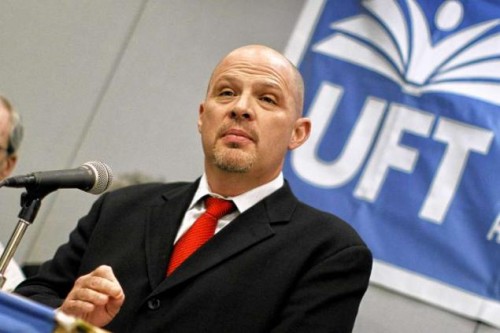 The New York City affiliate of the American Federation of Teachers, the United Federation of Teachers, has just filed its 2011-2012 financials with the U.S. Department of Labor. This past year, the nation’s largest teachers’ union local found itself dealing with growing pension and retirement burdens for its own employees.  The union’s pension deficit is now $42 million, a 14 percent increase over 2010-2011, while its unfunded post-retirement benefit obligations remain steady at $30 million. In total, the AFT affiliate must somehow pay down $72 million in pension and other post-retirement obligations. None of this is surprising. As Dropout Nation has reported in the past few months, AFT and NEA locals are struggling to fund the very defined-benefit pensions and other benefits they have long defended; the national AFT itself has to deal with $25 million in post-retirement benefits obligations.

As for influence-maintenance activities? The AFT affiliate poured $4.9 million into lobbying, contributions to supposedly like-minded groups, and other forms of political activity, barely budging from the 2010-2011 fiscal year. Another $24 million was poured into so-called representational activities which, while including arbitration costs, also include spending on political activities.; this is a 15 percent increase over 2010-2011. Among the recipients of the AFT affiliate’s largesse was the National Association for the Advancement of Colored People’s New York State and Big Apple units, both of which unsuccessfully teamed up with the AFT unit two years to oppose the expansion of charter schools; it received $44,200. Another $50,800 went to Al Sharpton’s National Action Network (in spite the activist’s support for charters). The union also tossed $10,000 over to the Hispanic Federation, and $5,000 to FairTest (whose opposition to standardized testing mirrors that of the AFT). The biggest recipient of AFT affiliate largesse: Progressive outfit New York Communities for Change, which received $376,881 from the affiliate in 2011-2012. The New York branch of Planned Parenthood also gained rank-and-file funds, receiving $125,000 during the fiscal year.

Meanwhile the UFT also spent plenty of money on its media campaign against outgoing New York City Mayor Michael Bloomberg’s school reform efforts. It spent $244,431 last fiscal year on so-called letters to parents and other media blitzes (including $123,000 in ads in the Daily News), while spent another $72,838 on polling efforts. It also contributed to the national AFT’s efforts to organize teachers working in charter schools, giving the parent union $62,699 for the effort.

Speaking of charters? The AFT unit also lent plenty of money to prop up its own charter, which faces possible shutdown after failing to make the grade. The union lent $12 million to the charter in 2011-2012, $2 million more than in the previous fiscal year. The union itself didn’t borrow heavily last fiscal year as it did in 2010-2011, when it tapped $22 million out of its line of credit with Amalgamated Bank (all of which was repaid last year). The union repaid a $1.4 million loan it took from its foundation in 2010-2011, while slightly paying down debt on the entities through which it owns buildings at 260 Park Avenue and 49 East 21st Street in Manhattan. Altogether, the AFT affiliate owes $50 million in long-term and short-term debt.

As for the salaries of top leaders: AFT local president Michael Mulgrew received $275,868 in 2011-2012, a slight decline from the $280,095 he made in the previous year, while the union’s notorious former mouthpiece, Leo Casey (now leading the AFT-controlled Albert Shanker Institute) picked up $71,781 in the most-recent fiscal year, a 15 percent increase over the previous year. The union’s secretary and treasurer, Michael Mandel and Melvin Aaronson, collected no compensation.

You can download the financials for your own reading pleasure.

Voices of the Dropout Nation in Quotes: Challenging Myths - and Boldly Fighting for Educational Freedom