Best of Dropout Nation: The Importance of Focusing on Achievement Gaps

Dropout Nation Editorial Board
1 Comment on Best of Dropout Nation: The Importance of Focusing on Achievement Gaps 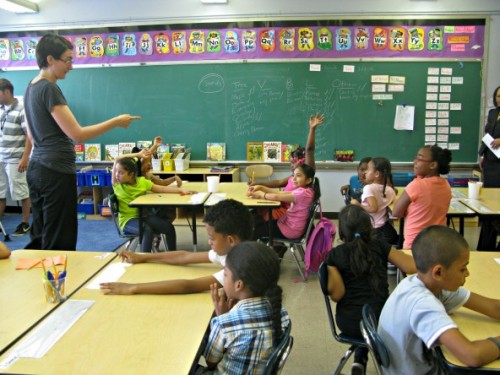 Even as we celebrate Christmas with our family and friends, we must also keep in mind the millions of young men and women who have been subjected to educational neglect and malpractice. Their struggles with literacy and numeracy are just the most-visible and yet, the most-ignored aspect, of the nation’s education crisis. And while some traditionalists attempt to use tragedy to justify their defense of failed policies and practices (and some reformers who should know better dismiss the needs to address achievement gaps), we must remember that these children, who are voiceless, are the reasons why we must remain strident in our efforts to transform American public education.

In this Best of Dropout Nation from October 2011, Editor RiShawn Biddle explains why the school reform movement should focus on helping struggling children stay off the path from poverty and prison. Read, consider, and take action by giving gifts of learning this season and into the New Year.

One-point-two million fourth-graders in 2009 – 33 percent of the nation’s students in that grade that year — were likely functionally illiterate. They were not reading at grade level, were struggling in other subjects that depend on reading such as math. And they are unlikely to ever graduate from high school eight years later. Another 948,193 students were likely reading at just basic levels; while they weren’t struggling as mightily as their functionally illiterate peers, they are barely at the academic Mendoza line, barely getting by.

Depending on their racial or ethnic background, whether their families are poor or wealthy, the zip code in which they lived at the time, or even if they are a boy or a girl, there are a lot of American fourth-graders who are not getting the education they need for success in school in life. Altogether, the majority of the nation’s fourth-graders were — and two years later — still are either on the path to dropping out or just graduating with a high school diploma in an age in which some form of higher education is necessary for attaining high-paying jobs as lawyers, accountants, elevator installers, and welders. Those who manage to find high-quality teachers (or, if they are in one of the few parts of the nation in which they can seek out high-quality alternatives to mediocre and failing traditional public schools) may be able to escape this path to economic and social despair. But for most of these kids — and for the millions of children in other grades — this is not likely at all.

These reality is why there is nothing wrong with what Rick Hess and others has deemed “achievement gap mania”. If anything, we need more of it than ever.

As Dropout Nation readers know by now, Hess has prompted a heated month-long discussion about whether school reformers should continue their focus on stemming achievement gaps as part of systemically reforming American public education. While Hess has certainly had some folks defending his positions, more evidence and commentary clearly shows that Hess’ argument is off-base. George W. Bush Institute scholar Matthew Ladner challenges much of Hess’ argument yesterday in his own analysis of data from the National Assessment of Educational Progress’ 2003 and 2009 exams.

As I’ve said in previous pieces, Hess has done a poor job of proving his argument that there are negative (and terrible) consequences that come out of focusing on stemming achievement gaps. Nor has he proven that the focus of reformers on stemming those gaps have has starved other topics of policymaking and philanthropic resources. As someone who has worked in — and with — a number of education-focused organizations, I can easily attest that there is just as much focus on such matters as school nutrition and bullying as on the problems of at-risk children.

But the biggest problem with Hess’ argument is this underlying assumption: That the problem of achievement gaps are limited only to poor kids of minority backgrounds attending schools in urban cities. This isn’t even close to reality. The fact that out of every four fourth-graders in a suburban school read Below Basic proficiency all but proves lie to assumptions of the contrary. The experiences of middle class black and Latino families in suburbia, who, along with white middle-class households whose kids suffer from autism, must often fight with principals and teachers to get their kids high-quality instruction and curricula, also attests to this fact. And don’t forget,  districts in rural communities — including areas of states perceived to be mostly-urban such as California and New York — account for one out of every five of the nation’s dropout factories.

Hess’ argument ignores the reality that, for the most part, American public education serves up mediocrity to many of the kids it serves — and abject malpractice to its poorest children, to black and Latino kids regardless of their levels of wealth, to children in foster care, and to the young men and women its teachers and administrators relegate to the academic ghettos of special education. This week, University of Houston researchers Sai Bui, Steven Craig and Scott Imberman offered one more example in their Education Next report on lack of progress among top-performing students attending gifted-and-talented classes. The low quality of teaching and curricula is not only endemic in classes for kids considered too black, too Latino, too poor (and thus, in the minds of those who serve as gatekeepers to gifted and talented courses) too incapable of taking what are supposed to be rigorous courses even in districts in which they make up the majority of enrollment, it is likely to be a problem for students who get into them. After all, those courses aren’t necessarily cordon solitaires from the systemic problems within K-12 education.

What Hess has proven are these undeniable facts: That our nation’s ed schools fail miserably in recruiting and training aspiring teachers. That school leadership generally remains more ideal than reality at nearly all levels of our districts. That there are folks in education who aren’t innovative in their use of curricula, instruction, or information (and lack sophistication in using data). That the lack of strong performance management and evaluation (along with tenure laws and seniority privileges that protect laggard teachers at the expense of children) have helped foster dysfunctional cultures in which there are no incentives to embrace new approaches to helping kids succeed. And that all our kids, regardless of who they are or where they come from, are not getting the instruction, curricula, and school cultures worthy of them.

Hess is right that the conversation about achievement gaps tends to be far too focused on the abject failures of big-city districts — and has allowed education traditionalists in suburbia to argue against reform. As Dropout Nation has consistently shown since its founding, the systemic problems within American public education that help foster and exacerbate achievement gaps extend beyond Detroit, Indianapolis and Los Angeles Unified. Reformers need to consistently remind Americans that the achievement gap is not just a problem of poor kids in the ‘hood.

But the solution isn’t to move away from focusing on stemming achievement gaps. In fact, it is impossible to solve the nation’s education crisis without it.

As a matter of simple mathematics, doing so makes sense. Young men make up three out of every five high school students who drop out every hour of every day; they also make up more than half of all students. Black and Latino students make up the majority of enrollment in western and southern states, the regions which account for 57 percent of the nation’s student population.

The achievement gap focus is also fiscally sensible. One of the biggest problems in American public education is that we spend $594 billion without any strategic focus whatsoever. We continually fund a system that, as Hess himself pointed out earlier this week at the Thomas B. Fordham Institute’s confab on student achievement, wasn’t built to provide them with high-quality learning. Even the No Child Left Behind Act’s laudable goal of forcing states and districts to focus on improving the achievement of poor and minority kids only touches a smattering of the dollars spent. Far more children would be helped if most of the $63 billion spent wastefully on school construction was focused instead on intensive reading remediation and expanding school choice.

As Ladner rightly pointed out yesterday, focusing on achievement gaps as a strategy for systemic reform is also absolutely and fundamentally the American thing to do. As a nation, we believe in providing all children with an equal opportunity to get the education they need so they can choose their own economic and social destinies. When the chances of a child getting high-quality instruction is as haphazard now as it was when my grandmother was attending school during the Great Depression, it insults the very idea of our nation as the shining city upon the hill. And we cannot compete in an increasingly global economy when one-third of our citizens can’t read while another quarter barely comprehend what’s written in The Huffington Post.

Finally, it is our moral and civic obligation. Whether you are a Methodist, a Humanist, a Buddhist, or a Benjamin Franklin-styled Deist, we should all be outraged that our tax dollars sustain a system in which 1.2 million children a year are condemned to poverty and system before they even have a chance to determine their own paths in life.  We should work furiously, unapologetically, to ensure that every child to have a good-to-great school at the center of their lives — and should shame anyone who defends practices that keep this from happening.

The solution isn’t to stop focusing on achievement gaps, but to expand that conversation, explaining how helping our kids served the least by American public education also helps all children and their families. You know, self interest. All children are helped when we overhaul how we recruit, train, and reward teachers, and when we replace laggard instructors with dedicated, high-quality teachers. Every child, be they in Detroit or in Grosse Pointe, benefits from high-quality school choices. And the fewer dropouts on the unemployment line, the more money will go into the pockets of those of us who pay nearly half of the nation’s taxes (and shoulder the burdens of a welfare state).

Such an expansive conversation would do more further school reform than a misguided misinterpretation of problems stemming from the nation’s education crisis.

The Dropout Nation Podcast: Give the Gift of Learning