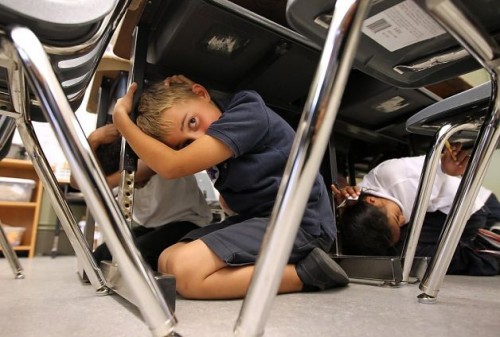 The average score gap between the average American fourth-grader and a Singapore peer on the 2011 Trends in International Mathematics and Science Study, which along with PISA and PIRLS, are the three main assessments of international student achievement. The between the two countries is 11 points lower than in 2003.

The rank of America’s fourth-graders in math. That’s one ranking higher than in 2003, when the U.S. was in 12th position. Meanwhile Singapore has remained  either the top-performing — or second place nation (after the Chinese province of Hong Kong) —  over that same period.

The average score gap between an American eighth-grader and his South Korean peer on TIMSS 2011. That’s three points greater than in 2003.

The rank of U.S. eighth-graders in math on TIMSS, a six rankings improvement over 2003, when the nation ranked 15th. South Korea improved its ranking from second place to first within that eight-year period.

The average score gain for American fourth-graders between 2003 and 2011. That is a four-percent increase in achievement in the eight-years in which the No Child Left Behind Act was implemented. That outpaces the 12 point average gain Singapore students achieved in that same period.

The average score gain for American eighth-graders between 2003 and 2011, less than a 1 percent increase in achievement. This is lower than the 16 point average gain for South Korean students in that same period.

The ranking for fourth-graders in North Carolina and Florida, two states that participated in benchmarking for TIMSS 2011, if each was a country. Students in both states scored, respectively, 13 and five points higher than the national average.

The ranking for eighth-graders in Massachusetts, North Carolina, and Florida on TIMSS if they were countries. Students in each state scored, respectively, 52, 28, and four points higher than the national average.

The percentage increase in math achievement for Massachusetts eighth-graders between 2007 (when the state began participating in benchmarking) and 2011, a three percent increase in achievement during that period; the U.S. overall increased math achievement by just one point in that time. This is better than the one-hundredth of a gain made by the United States in that same period.

The average gap by which American fourth-grade young men  trail their young women  peers in literacy on the 2011 PIRLS.

Plenty can be said about today’s TIMSS and PIRLS results. The good news is that the No Child Left Behind Act has been an imperfect, yet important first step in fostering systemic reform. The law brought accountability to American public education, forced revelations of inflated graduation rates, and showed the poor performance of suburban districts in improving student achievement for all kids (including those from poor and minority backgrounds). The law also spurred reforms in curricula and in instruction that have led to fewer American fourth-graders performing poorly in basic math compared to their peers around the world.

As seen with the 2011 data from the National Assessment of Educational Progress, the TIMSS results also offer some examples of the benefits that come from states engaging in aggressive systemic reform, and developing strong, comprehensive college-preparatory curricula standards. Given that not all states participated in TIMSS this go round (and that Florida and North Carolina are participating for the first time this year), one must be cautious in reading the results. But it is clear in the case of Massachusetts, that the work done on improving curricula and standards (as well as other reforms) have led to strong performance. And Florida’s strong performance in reading has shown the success of its literacy reform efforts.

Yet the country’s woeful performance compared to its peers serves as a reminder that we can’t afford to subject our children to educational neglect and malpractice, especially in an age in which what you know is more important than what you can do with your hands, and science and technology careers offer poor and minority children entry into the middle class. The woeful eighth-grade results show that while we have done well to improve basic numeracy, America isn’t doing well in providing kids with high-quality math instruction and comprehensive math curricula — especially algebra and trigonometry, the key skills needed for high-paying white- and blue-collar jobs — in the later grades. The fact that American eighth-graders score trail South Korean peers despite reportedly spending more time than their peers across the Pacific working on math problems under the direction of their teachers also shows the need to improve how we recruit, train, evaluate, and compensate teachers. And while the literacy gap between young men and their female peers has decreased in the early grades, the fact that young men still make three out of every five eighth-graders who drop out — and have levels of post-secondary attainment far lower than their female peers — once again points to the need to address gender-based achievement gaps, as well as provide poor and minority children with education befitting their futures.

This means we must build upon the first wave of reforms unleashed by No Child and continue the overhaul of American public education. As Dropout Nation Editor RiShawn Biddle mentioned today on the pages of the New York Times,  this includes providing all children with strong, comprehensive college preparatory curricula, and implementing Common Core standards to set the high floor for them. It also includes revamping how we recruit, train, evaluate, and reward teachers; develop stronger, more-entrepreneurial school leaders; expand the number of high-quality school options for all kids; provide all kids with strong college preparatory curricula; make parents the lead decision-makers in education and given them the tools they need to make smart decisions for their kids; and build cultures of genius in which the potential of all kids can be nurtured. And, contrary to the steps taken by the Obama administration with its arrogant and counterproductive effort to eviscerate No Child, we must also expand accountability, holding all the players in education accountable for doing right by our kids, no matter who they are or where they live.

Making those second round of reforms stick will take a lot of work. It will involve stronger challenges to traditionalist policies and practices — and upsetting Baby Boomers in the teaching and school leadership ranks who have embraced them. It also involves reformers of all stripes challenging their own thinking, as well as that of their counterparts across within their respective parties and political camps whose views on education are colored by their ideological views on other issues. Republicans and conservatives who support Common Core, for example, will have to take on colleagues who view the standards as the nationalization of education, while centrist and civil rights-oriented Democrats who support expanding school choice, Parent Power, and teacher quality reforms will have to do the same with progressive colleagues. This won’t be easy. But it never is.

An increasingly global economy and society isn’t waiting on America to get its educational act together. There’s no reason to slow down on systemic reform of a supercluster of failure.

The Top Eight Books of 2012 That School Reformers Should Read