Dropout Nation Editorial Board
Comments Off on Voices of the Dropout Nation in Quotes: Stop Institutionalizing Soft Bigotry of Low Expectations 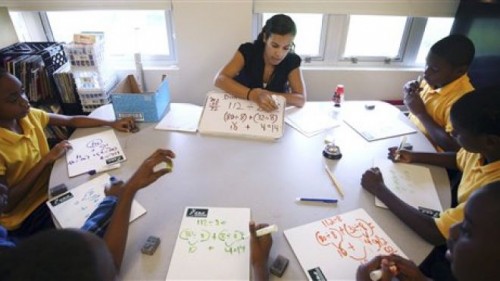 Closing the achievement gap in our schools is both a moral mandate and a national priority. We need all our children to meet high academic standards if we are to compete in the 21st Century global economy. This is why plans by Washington, D.C., and some states to lower academic standards for minority and low-income students are as puzzling as they are misdirected. By what calculation do you speed up learning by lowering expectations? This delivers a devastating message to African-American, Hispanic and low-income children that they are not as capable as other children….  more about taking the pressure off adults than boosting the learning gains of minority children… You don’t close an achievement gap by institutionalizing it…

As a nation, we have rejected police use of racial profiling on the streets. By what rationale do we now accept it from educators in the classroom?

Former Florida Gov. Jeb Bush decrying one consequence of the Obama Administration’s No Child waiver gambit : The move by states to embrace the soft bigotry of low expectations for poor and minority kids.

Many traditionalists campaign for a singular and uniform public school system, all children served by one entity. But, say reform advocates, a mature and high-functioning public school ecosystem should comprise various interacting layers that integrate governmental oversight and support for the students along with independently-minded alternatives, all bound together in service to student growth. One good example of this would be school choice, which  has a particular resonance in New Jersey because of the rhetoric that characterizes non-traditional schools as a detriment to suburban districts. But if we follow along with Brooks, our  school system should offer a variety of elements – traditional schools, charter schools, blended online schools – all linked together in service to students. In this utopia there’s no “battle between government and private sector,” no anti-choicers shrieking about corrupt hedge fund managers or drained school funds or intrusive governmental oversight. Just a healthy, harmonious ecosystem that respects its various layers.

Laura Waters, on NJ Left Behind, riffing off David Brooks’ latest New York Times column to explain the possibilities for all children when we move American public education from the traditional district model.

Nubia Baptiste had spent some 665 days at her Washington, D.C., public school by the time she walked into second period on March 27, 2012. She was an authority on McKinley Technology High School. She knew which security guards to befriend and where to hide out to skip class (try the bleachers). She knew which teachers stayed late to write college recommendation letters for students; she knew which ones patrolled the halls like guards in a prison yard, barking at kids to disperse. If someone had asked, she could have revealed things about her school that no adult could have known. Once Nubia got talking, she had plenty to say. But until that morning of her senior spring, no one had ever asked… In towns around the country this past school year, a quarter-­million students took a special survey designed to capture what they thought of their teachers and their classroom culture. Unlike the vast majority of surveys in human history, this one had been carefully field-tested. That research had shown something remarkable: if you asked kids the right questions, they could identify, with uncanny accuracy, their most—and least—effective teachers…

At McKinley, a magnet school for science, technology, engineering, and mathematics, Nubia Baptiste filled in bubbles in response to all 127 questions. Then she slipped the survey into the envelope provided and sealed it. Afterward, in the hallway, she tried to understand what had just happened. It didn’t fit with her previous experience. “No one asks about the adults,” she said. “It’s always the student.” A classmate standing next to her shook her head. “They should’ve done this since I was in the eighth grade… I lived the dynamic”

Amanda Ripley in the Atlantic Monthly,  pointing to a real-life example of Dropout Nation’s Familiarity Breeds Hypothesis that students know more about teachers than the adults who conduct unreliable classroom observations.

Both exams showed a strong correlation between high exam scores and completing a core curriculum in high school (four years of English and at least three years of math, natural science, and social science). This reinforces the need for more schools to adopt more rigorous standards, such as the Common Core. Despite a decline in mean scores, there were more high performers on the SAT than ever before. With 45 percent of test takers identifying as minority students, the Class of 2012 represented the most diverse class of SAT takers in history. ACT reported 41 percent of 2012 test takers identified as minority students, the highest percentage since 2008.

Sarah Jensen of National Math and Science Initiative’s Laying the Foundation effort, pointing out the need to provide all children with comprehensive college-preparatory curricula — and one of the benefits of efforts spurred by the No Child Left Behind Act to help poor and minority kids get on the path to higher education and better lives