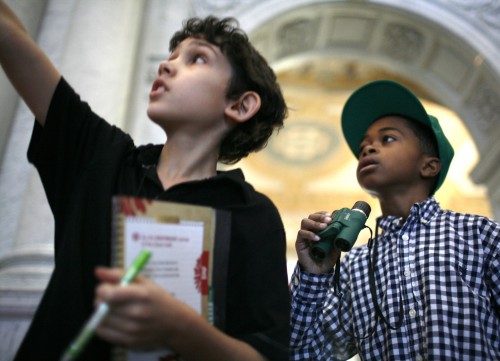 Photo courtesy of the Library of Congress

Certainly, maximizing the abilities of our most talented youngsters is also an important part of developing our human capital. And there is evidence that our schools are not doing as much as they could on this front–particularly for talented low-income and minority students who often are not identified for these programs… But the grim reality is that in practice the gifted and talented label–and special programs for youngsters who wear it–often has less to do with meeting specific and unique needs of especially bright youngsters than with rationing access to a limited supply of quality educational options. That’s why parents in places like New York City (where “gifted” children may gain access to specialized placements as early as in kindergarten) are spending exorbitant effort and money to get their kids identified as gifted. Implicit in many of Finn’s arguments seems to be the assumption that we can’t possibly provide academically demanding, safe, high-quality schools staffed by excellent teachers for all of our kids, so we’d best focus on those who are likely to amount to somethng some day. But a nation as rich and technologically advanced as ours should be able to provide quality educational options to all of our children, from those with significant cognitive needs to those with extraordinary abilities–not fighting about how to divvy up a limited supply of quality options.

Ultimately, debating whether or not or how many special schools we have for gifted and talented students obscures the larger picture here–We should strive for a day when all U.S. schools are capable of providing a good education to students with a range of abilities and when all kids have access to good schools. Today we do neither.

Sara Mead of Bellwether Education on her Education Week blog,  explaining why Thomas B. Fordham Institute’s Checker Finn is off-target in arguing for the kind of racialist rationing of education policies that have led to the nation’s education crisis (and does little for students in gifted programs to boot).

Critics of the traditional model of education–particularly math–argue that traditional methods worked only for the gifted kids (for whom it is assumed they will learn what they need to know no matter how it is taught). And the corollary to such thinking is that students not gifted are not good enough for the traditional method.. . It has come to the point now that students who have been forced through circumstances into non-honors tracks, and judged to not be able to handle the “traditional mode” of education (i.e., judged not to be gifted) are thus “protected” from it. And in being protected from learning they are therefore not presented with the choice to work hard… Which raises the question of whether higher expectations and more teacher-centered instruction yield better results. Vern Williams is a middle school math teacher in Virginia, who teaches gifted students and served as a member of the President’s National Math Advisory Panel. He relates a story about how he was recently assigned a tutorial class made up of students who had failed and barely passed Virginia’s sixth grade math exams. When he first started teaching the class they wanted to play games, but Williams challenged them and included material that he was teaching to his seventh grade (gifted) algebra classes. He reports “Many of the students wanted to ditch their regular ‘baby’ classes and just attend mine. They viewed my class as not only interesting but serious.”

Students who have been put on the protection-from-learning track fulfill the low expectations that have been conferred upon them… the view that so many students somehow are lacking in cognitive ability raises serious questions. Simply put, you no longer have to be a minority to be told you may not have cognitive ability. The education establishment in many areas has eliminated the achievement gap by eliminating achievement.

Can anyone argue with Barry Garelick on that?

We have to rethink our definition of public education, so it begins before kindergarten and goes beyond classroom walls. Schools are the centerpiece of our children’s academic life, but they are failing to inspire, educate, and develop millions in poverty. We need to radically reform a public education system that has been paralyzed for decades. The problem is not a lack of curricula and instructional tools, but a lack of perspective and political will…

Family life has a tremendous effect on a child’s educational prospects, and the early years essentially set the table for future learning. There, too, I agree with Heckman. But we cannot simply blame or ignore the parents… At the Harlem Children’s Zone… we have a parenting program, The Baby College, where we have learned that if parents are treated with respect, they are open to changing their assumptions about raising a baby. Where they might not have spoken to a baby who “can’t understand,” they learn to talk, read, and sing with them to encourage optimal brain development. And at our Harlem Gems pre-kindergarten program, we bring parents into the process, and most are excited to play such an active role in their child’s development…

We must—as a society and as educators—uphold our responsibility to help their children become self-sustaining adults. These children belong to all of us, but we are simply not acting that way. Once we accept that, we will have made the first step in changing the direction of their lives.

Geoffrey Canada, in Boston Review, on why pouring money into early childhood education isn’t enough to help all kids succeed. Overhauling the rest of American public education, and giving parents power and tools, must also be part of systemic reform.