Matt Barnum
1 Comment on One Lesson of the Chicago Strike: We Must Win Teachers Over 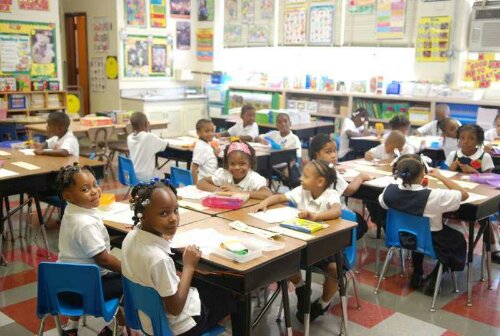 It’s obvious after the recently-suspended strike by the American Federation of Teachers’ Chicago local that the union affiliate’s boss, Karen Lewis, and Mayor Rahm Emmanuel don’t agree on much. But no doubt, both would affirm that they “support teachers.” Everyone in education and politics swears support for educators, but different sides have increasingly divergent ways of showing said backing. More so than ever perhaps, there is a sharp separation in reformers’ minds between teachers (good) and teachers unions (bad). New Jersey Gov. Chris Christie put it best at the RNC: “They believe in teachers unions; we believe in teachers.”

The problem is that distinctions between teachers and their unions are not easily made. Here in Chicago, nearly ninety percent of Chicago Public School teachers voted in favor of the strike. [Editor’s note: Given that in many cases, unions allow retired teachers to vote — and that retired teachers often make up half of votes in union leadership elections — even the Chicago vote must be taken with caution.] This shouldn’t be all that surprising. A teachers’ union is composed of teachers, its leaders are elected by teachers, and, in most cases, its policies are supported by teachers. If a union fails to represent its member, then presumably new leaders would be voted into place.

Indeed, the evidence suggests that union advocacy is fairly reflective of teachers’ perspectives.  Although organizations such as Education Sector have shown that there is strong support for school reform and teacher quality reform efforts, others surveys also show that there is still significant opposition to them. The vast majority of teachers still think that their NEA and AFT affiliates are necessary to protect what they consider to be abuses of power by school leaders. Only about a third of teachers favored bonuses or salary bumps for teachers based on their students’ standardized test data. And depending on the study (and length of time on the job), many teachers share the skepticism of NEA and AFT leaders about scrapping tenure, judging teachers based on student test scores, and making it easier to fire low-performing educators.

This skepticism is especially clear when it comes to questions about class size increases and reductions. The preponderance of evidence, along with my own views and that of reformers such as U.S. Secretary of Education Arne Duncan and Dropout Nation‘s editors is that class-size reductions are neither cost-effective or do much to improve student achievement. But there are plenty of  anecdotes suggesting that many teachers think otherwise.  It should be no surprise that the Chicago AFT has called for class-size caps.

Chicago has found it politically untenable to implement education policies without support from teachers. But even if reforms could be pushed through in spite of union opposition, would that be altogether desirable? After all, who will implement and experience these reforms? The teachers, of course – the same ones who think those policies are wrong. Education reform groups and school districts must convince teachers of the policies they’re advocating and implementing; otherwise, the implementation will likely fail. A different path could focus on the grassroots rather than the grasstops of schools. Reformers need to convert teachers to their side, because if educators change their views, the unions must follow.

The dialogue for this sort of persuasion to succeed is, of course, a two-way street. When I taught in a low-income public school, most teachers were at once wary and open to change. They wanted the schools to improve, but they’d been through too many “reforms” to trust that the latest round was here to stay. Only a small minority seemed to embody the stereotype of the veteran, burnt-out educator who opposes any change simply because it is change. To have an impact, reformers must appeal to the former group of teachers. Meanwhile, all teachers must challenge themselves to remain open-minded to potential reforms.

It’s obvious that the Chicago AFT was attempting to send a message to education reformers in Chicago and perhaps across the nation. But the real message – albeit one not approved by Karen Lewis – is not that current reform efforts should be abandoned. It is that teachers must be aggressively persuaded of the efficacy and necessity of these reforms. Otherwise, Chicago won’t serve as an outlier, but as an omen.