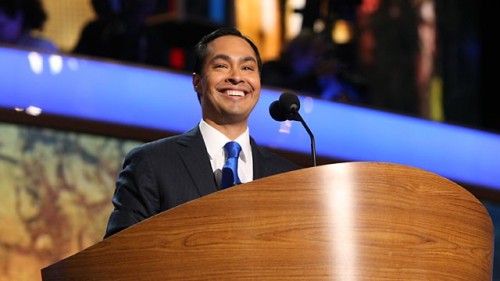 Dropout Nation readers weren’t surprised when San Antonio, Texas, Mayor Julian Castro discussed his efforts to reform education during his appearance at the Democratic National Convention earlier this week. After all, the Harvard grad was briefly profiled on these pages last year after he announced a series of plans, including supporting what became the successful campaign of former city councilwoman Patti Radle to the board of the largest of the 16 districts serving children and families within its limits. Since we last mentioned looked into Castro’s efforts, the mayor has stepped further into advancing reform, unsuccessfully backing another school board candidate, while taking aim at the Harlindale district on the city’s south side for ousting its superintendent after a little more than three years on the job; in the latter case, Castro even showed up at a Harlandale board meeting to give school leaders the business.  And most-recently, Castro managed to use his bully pulpit to put the kibosh on the San Antonio district’s plans to use bond money for converting one of its stadiums into an entertainment center.

Certainly Castro is doing more than just offering talk when it comes to systemic reform. He is also following a path paved by mayors past and present such as Richard Riordan in Los Angeles and his successor, Antonio Villaraigosa, as well as Stephen Goldsmith, Bart Peterson, and Greg Ballard in Indianapolis (which, like San Antonio, is served by several traditional districts). Yet at the same time, it isn’t enough to deal with the woeful conditions of education for land of the Alamo children. Just 58 percent of the eighth-graders in San Antonio Independent’s original Class of 2009 graduated on time while only 62 percent of South San Antonio’s eighth-graders and 72 percent of their peers in Harlandale graduated five years later. For the young Latino men who look like Castro when he was young, the prospects of graduation are especially dim. One-third of young Latino men who made up the San Antonio district’s Class of 2009 weren’t promoted to senior year of high school five years later, while the promoting power rate for young Latino men in South San Antonio and Harlandale were, respectively, 62 percent and 70 percent.

Meanwhile his fellow city leaders, notably on the seven-member council, seem far less-engaged in addressing the aspect of the nation’s education crisis affecting their municipality and its consequences on the growth prospects of what has been up to now, one of the nation’s fastest-growing metropolises. While Castro’s fellow councilmembers moved last month to approve his plan for the city to run early childhood programs, they haven’t been as engaged as the mayor in robust conversations about how to overhaul traditional districts or even in whether to move into the arena of authorizing public charter schools. This is understandable. Given that neither Castro nor the council oversee traditional districts, and the need for both to master the other aspects of their respective jobs (especially keeping crime low, managing city finances, and attending to other quality of life issues), it is hard to put more than scant attention to systemic reform.

Castro can’t simply use his bully pulpit alone in order to transform education in San Antonio and improve its long-term economic prospects (as well as that of the children and families in the city). So he (along with City Manager Sheryl Scully, who runs San Antonio’s day to day operations) needs to follow the path paved by current and former counterparts such as Michael Bloomberg in New York City, and Richard Daley in Chicago, and take full control of at least one of the district’s serving the nation’s seventh most-populous city.

As Dropout Nation has made clear over the past few years, mayoral control has largely proven to be a successful approach to advancing reform. Certainly the fact that citizens can hold one person responsible for the success or failure of a district instead of having to deal with often unaccountable school boards (which tend to be servile to National Education Association and American Federation of Teachers affiliates) is one reason why it works as a form of school governance. The bigger reason lies in the fact that putting the city’s too executive in charge of schools immediately engages city government in doing what it takes to overhaul schools. Mayors have to wisely pick school chief executives, who will have plenty of time (so long as the mayor remains in office), ensuring that those school leaders stay on the job for superintendents in traditional district arrangements. In New York City, for example, Joel Klein remained in charge of Bloomberg’s effort for eight years, while Tom Payzant in Boston held his job for 11 years.

But this focused attention on schools extends beyond the mayor. As any councilmember in the Big Apple can attest, district budgets, school closures, and even teacher quality issues can become important discussion points both within city hall chambers and in community meetings. This is because anything a mayor touches ultimately becomes a matter for city legislators to consider, shape, and approve. This engagement of city councilmembers extends to the wider community, with residents demanding that all city leaders do more to fix failure mills in their neighborhoods and expand school choice and Parent Power options throughout the community.

This can be seen in Washington, D.C., where the takeover of the school district overseen by former mayor Adrian Fenty during his only term in office has led members of the otherwise clownish city council to be more active on education policy. Before resigning his spot as council chairman after his fraud conviction this past July, Kwame Brown managed to generate robust discussion about rewarding high-quality teachers, spurring family engagement, and expanding the number of middle schools that serve the District’s student population. His predecessor, Vincent Gray, has gleaned the experiences he has had in dealing with the efforts undertaken under Fenty (whom he ousted from from the mayoral job two years ago) to continue the reforms — including the path-breaking IMPACT teacher evaluation system — Fenty and his schools czar, Michelle Rhee, had put together.

This isn’t to say that engaging city councilmembers in systemic reform has no adverse consequences. As seen in New York City, mayoral control means that affiliates of the NEA and AFT also become more-engaged in lobbying those city officials and using their vast war chests to preserve the decline in influence that comes with the end of school board control. The very intimidation the two unions use in beating back reform efforts in state legislatures also becomes an issue at the local legislative level. And given the prevalence of graft and corruption in many cities, one can expect city councilors to try to turn schools into their own nests for corruption.

Yet this stepped-up engagement is an important thing. For one, given the important economic and social role districts play in communities and municipalities, it makes sense for city councilmembers to be as concerned about schools as they are about potholes and sidewalks. When city councilors focus on revamping dropout factories, they are are addressing one of the most-critical culprits of rising crime and declining tax bases.

It also makes fiscal sense, especially for districts themselves. One of the reasons why traditional urban systems such as Philadelphia, Camden, N.J., and Bridgeport, Conn., generate so little in local tax dollars, even when their tax rates are higher than suburban counterparts, is because of the dysfunctional fiscal policies — including tax abatements given to developers for costly real estate schemes that siphon off dollars from district coffers. In those cities, politicians who run the rest of government can ignore the fiscal needs of the school district, whose operations they don’t oversee. This disconnect between district and city finances (along with the result of state governments taking over as much as 80 percent of annual district expenditures) results in city leaders failing to concern themselves with either school funding or with district operations.When city councilmembers must address school budgets, they are then forced to be more-thoughtful about whether they should hand off tax breaks to developers that do little to improve local economic profiles for the long haul, and actually end up damaging schools.

Ultimately, mayoral control can spur councilmembers to become the strong reformers needed to advance the transformation of American public education. If not for mayoral control in New York City, Eva Moskowitz likely wouldn’t have become an activist for advancing reform during her time on the city council, and certainly not bothered to play a more-active role in expanding school choice by launching the Success Academy chain of charter schools. Mayoral control can actually serve to breed even more reformers who have the political savvy and passion for helping all kids succeed needed to sustain reform. And, at the end of the day, it will take city legislators and strong mayors to overhaul failing urban districts.

For Castro and other reform-minded mayors, handing failing traditional districts into the hands of city leaders would certainly help bolster the city’s economic, social, and quality of life fabric. And it will lead other city leaders to take active roles in creating the conditions that help all kids succeed.

Voices of the Dropout Nation in Quotes: What Are You Doing to Help Kids Succeed?