Can Alabama’s Takeover of Birmingham Lead to the Hollywood Model?

RiShawn Biddle
Comments Off on Can Alabama’s Takeover of Birmingham Lead to the Hollywood Model? 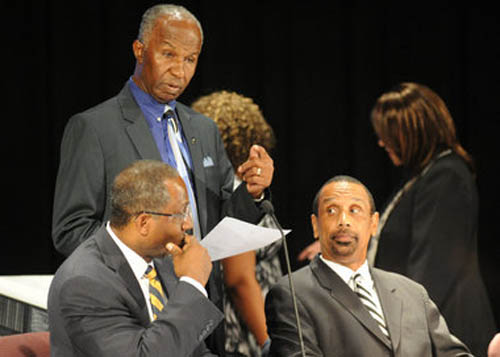 Photo courtesy of the Birmingham News

By any measure, the Birmingham, Ala. school district is a shambles. Despite a 28 percent decline in enrollment between 2000 and 2010, and the shutdown of 21 schools in that time, the district has failed to cut its headcount. The percentage of support staff has increased by 97 percent during that period, while 120 administrators still remain on staff. Birmingham also keeps 23 staffers more than $100,000 a year on the payroll. So it wasn’t shocking that district fell afoul of Alabama state education officials after it failed to meet state requirement to keep $17 million in reserves (equal to one month’s of expenses). In June, after rejecting a plan to lay off staffers, the state education department moved to take over the district’s fiscal controls.

This hasn’t sat well with the district, which has unsuccessfully challenged the state’s takeover, and has attempted (and failed) in its effort to fire the current superintendent, Craig Witherspoon. The board’s recalcitrance has gotten so ridiculous that state Superintendent Thomas Bice has decided that board meetings will only be held under his lead or that of new school czar. It also hasn’t sat well with supporters of the district’s status quo, especially the local branch of the National Association for the Advancement of Colored People (which has asked for an investigation into the state’s move to hire a former state superintendent to head up its fiscal overhaul and investigation into finances), and others, who failed to convince the city’s general government, which has no control over the district’s operations, to hand over $15 million in order for the district to meet the state’s reserve requirements. Add in questions about the future of Birmingham’s accreditation, and whether the district’s board president is even a full-time city resident (and thus, allowed to hold his seat), and it is clear that the district is just in wretched shape.

But while Birmingham’s fiscal malaise has gotten the most attention, it is its academic failures that are the most-disconcerting. Just 64 percent of the district’s eighth-graders who made up the original Class of 2010 made it to senior year of high school, a mere five percentage points better than a decade ago, according to Dropout Nation analysis of the latest data submitted to the U.S. Department of Education; the district’s graduation rate has declined by nearly two points (from 57 percent to 55 percent) in that same period. Young black men fare particularly poorly in the district, with just 58 percent of them being promoted from eighth-grade to senior year, compared to a 72 percent promoting power rate for young black women schoolmates. And although just 14 of the district’s 56 schools didn’t make Adequate Yearly Progress, this hints little at the low quality of education provided by the district to the children in its care. Just 6.2 percent of Birmingham’s high school students took at least one Advanced Placement course in 2009-2010, according to the U.S. Department of Education’s civil rights database, while only 12 percent of them are taking trigonometry, statistics, and other forms of advanced mathematics. For Birmingham’s students, nearly all of them black and plenty of them struggling economically, there is little likelihood that they are being prepared adequately for an age in which knowledge means more economically and socially than the ability to work with one’s hands.

State education officials can’t just sit pat with taking control of Birmingham’s fiscal operations. It is clear that the district’s status as both an academic and fiscal going concern is in question. While Birmingham isn’t necessarily in as bad shape as Detroit or Philadelphia, the district has continually ignored the need to provide all of its students with high-quality teaching and instruction. The district has struggled with its primary mission for at least a decade (and likely longer). And while Witherspoon deserves credit for pushing to provide all students with college-preparatory curricula (especially in expanding International Baccalaureate coursework in the district’s high schools), the reality is that he still hasn’t done a good enough job of taking on the dysfunctional central and school-level bureaucracies that are among the key reasons for Birmingham’s struggles. Nor could he even if he wanted. When a district has reached Birmingham’s level of dysfunctional, no superintendent can fully take it on without some outside intervention.

So the need is to take radical steps toward overhauling Birmingham. Given the woeful history of state takeovers (and the overhaul woeful results from district and school restructurings), it’s important for Alabama to get this right. One possibility could lie with handing over the district to the city government, placing it under the control of Mayor William Bell and the city council. But the city government’s own history of corruption — including the 2009 conviction of Bell’s predecessor, Larry Langford, for bribery and other malfeasance — likely makes the conversation a non-starter at the state capital (even though state government has its own sordid recent history of graft and sleaze). The more-promising possibility lies in the state embracing the Hollywood Model of Education and effectively breaking the district apart. One possibility could include the state spinning off the district’s worst-performing schools into a separate operation similar to the successful Recovery School District model in New Orleans; under such a plan, schools could end up being run on their own by a board of directors that consists mostly of families, who, along with community members, can spur the overhaul of the failure mills and dropout factories that have long littered their communities. This could also be done for the other schools in the district, effectively transforming the district’s central bureaucracy into the role of handling and contracting out services such as maintenance and school lunches.

Such a move will require two key steps. The first: Passing a Parent Trigger law that would allow families to take control of failing schools. The second?  Pass a law allowing for the creation of public charter schools. That is something the state has been unwilling to do. Earlier this year, an effort by Gov. Robert Bentley to pass a charter school law fell to seed amid opposition from Birmingham and other school districts, along with the NAACP’s Iron State affiliate, and the National Education Association unit. The fact that neither Bentley nor leaders in the Republican-controlled legislature showed almost no leadership on advancing the legislation, all but made certain that charter schools wouldn’t come into reality this year. Thanks to Bentley’s decision earlier this month to not put another charter school proposal before the legislature, there is even less hope for charter schools becoming a reality next year.

But there is still plenty of opportunity for reformers in the state, including the Alabama branch of Black Alliance for Educational Options, grassroots activists tired of the obstinate opposition to reform from the NAACP and others, and city business leaders, to leverage Birmingham’s struggles to provide children in that district — and throughout the state — with the education they need to write their own stories. Considering the district’s woes, reformers should immediately run a campaign demanding Bentley to once again put charter schools on the agenda. They should go even further by advancing a package geared toward overhauling Birmingham schools that includes a Parent Trigger provision, the launch of a school voucher program similar to that in New Orleans that was recently expanded to serve the entire state of Louisiana, and development of a school data system that provides more-helpful information to Birmingham parents tired of keeping their kids in failing schools. Given the public embarrassment that is Birmingham, reformers can easily force Bentley’s hand, and that of Bentley’s allies in the legislature.

Birmingham’s children and families have been poorly served by the district for far too long. The state’s takeover of the district should only be the start of a much more-expansive reform effort that gives these families and other taxpayers schools worthy of their dollars and our children’s lives.

Best of Dropout Nation: The Inmates Remain in Charge: The Culture Change Problem of School Turnarounds

The Dropout Nation Podcast: Be About It for Our Children